IT’S A TYPICAL APRIL MORNING IN KINGSTON, sunny yet pleasantly cool. By ten o’clock the sun will be hot, and by four o’clock the clouds will roll in over the Blue Mountains and, most likely, a rain will soon come, as people say here. I jump in my old Honda Odyssey and head out for another day of teaching.

A left turn out of our complex leads to a bright blue, two-story house, painted with white clouds and a doctor bird. My neighbor told me the house is owned by Ken Boothe, a nationally known singer who once sang “The Train is Coming” with Kingston’s very own Shaggy.

I take an indirect, zigzag approach to work in order to avoid the congestion of Hope Road, the main road in this part of the city. North Americans talk of how aggressive Jamaicans – taxi drivers in particular – can be behind a wheel. But after living in Asia and South America, Jamaican drivers seem downright considerate with their blies approach to the road, and will stop to let you make a turn even if they have the right of way. 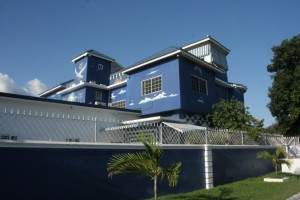 Instead of heading to Hope Road, we turn left at Ken’s place – I never did manage to visit him yet – and into a lower-income neighborhood that backs onto a gully. The gully is a five-metre wide, four-metre deep cement drainage ditch that funnels away the heavy rains and tropical storms that dominate the autumn months in Kingston. A collapsed house sits among a pile of rubble – a sad reminder of the family of seven, all killed because of a weakness in the gully.

A businessman friend of mine told me a story that’s doing the rounds: that construction companies lay the rebar, get permission from the city to pour cement, and then lift the rebar and move it to another location after the city engineers have left. They pour the cement without the rebar, which saves them money, but leaves weak walls, and houses that are prone to collapse.

My car tires crush some mangoes that have fallen overnight. Further down the street, a man is waving around a long pole with a coat hanger bent into a hook attached to the end. He’s using it to pull mangoes from the branches of his tree. A woman with a big smile and a thick Jamaican accent waves and wishes me good morning, as she does every morning. I walk this street a lot, but only ever see her as I’m driving to school. A man, maybe 50 years old and with a long scar running down the back of his head, sits by the side of the road. He’ll be there when I drive home, too. He never looks up or waves. He just sits there day after day, looking at the ground. 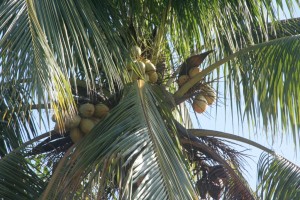 Boys and girls in light brown uniforms start to fill the streets as they walk toward the bus stops. There’s a Seventh Day Adventist church in this neighborhood, and on Saturday the brown uniforms will be replaced by church clothes. The men will wear suits with a fedora, and the women colorful dresses with wide-brimmed church hats.

I wind past some murals on a long residential wall. There’s a painting of a rosebush, a couple on horseback silhouetted against a sunset, a Jamaican flag, and a road leading off into the distance. A sign says, “Blessed are those that give and forget and receive and are grateful.” The last image is of a beautiful waterfall and lake. The words, “Make Jamaica a better place” are written above. Garbage is strewn all over the grass below.

At the next intersection, I turn up. “Up” means north towards the Blue Mountains. “Down” is south towards the Caribbean Sea. The houses in this middle to upper-middle class neighborhood are different from one to the next, yet conform to the same template. They are all painted in whites, pale yellows, or light greens. They all have a cement wall around the yard, with some decorative spikes on top. The windows and doors tend to be barred. A carport sits on one side of each house. Palms, mangoes, and bougainvillea bushes dominate the yards. Every house has a covered porch out front where the residents can enjoy the cool evening and the sunset. 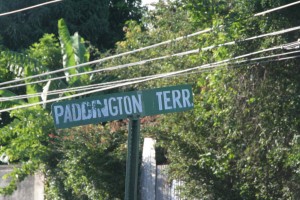 I pull up to a “T” in the road where two ladies sell The Gleaner, The Observer, and The Star newspapers, along with whatever fruit is in season. Today, it’s mangoes. Another time, it would be ackee, or lychee, or Jamaican apples. Sometimes a lean but ripped man wearing a Jermaine O’Neal Indiana Pacers jersey helps out. He wears a different pair of shorts every day (sometimes baggy jeans), but always, always that Pacers top. As the cars slow down, one of the ladies runs out in the street to make a sale.

On the next corner stands a monstrous, salmon-coloured house with white trim around the windows and bright white doors. Two stories, with a balcony running around the entire house, it would likely be large enough to partition into eight good-sized apartments. Months ago, a taxi driver told me about the two brothers who allegedly built and lived in the house. They were paid assassins, able to afford their mansion because business was so good in Jamaica. But one day while out of the city, they themselves were murdered.

From here, it’s only three more minutes through a residential neighborhood to get to work. The security guard at the school gate knows most of the parents’ license plate numbers by heart. He greets me with, “Wha gwonn?” – Jamaican for “How are things?”

“Blessed and loved” I reply.

Tagged
Expat Life Narrative
What did you think of this story?
Meh
Good
Awesome