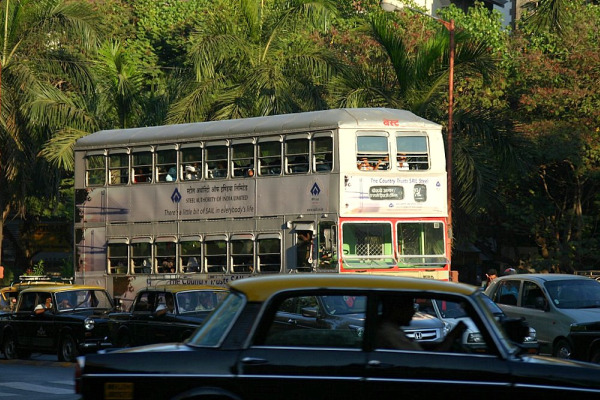 All photos by Neha Puntambekar

The corner chaiwala pours milky tea into a glass. The glass is filled just halfway – the portion is called cutting. Behind the cart a younger boy, he doesn’t look more than 11, is rinsing out used glasses. Next to them is a tobacco stall. Two yuppies, dressed in formal clothes, ties folded in their front pockets, stand with freshly lit cigarettes. Since single cigarettes are available for a rupee, or less, depending on the brand, corner smokers are a common sight. I walk past them and cross the road to the bus stop.

“Tikeett?” The conductor half barks. The steel box holding ticket coupons is strapped across his brown uniform. He clicks the ticket puncher with his right hand – ‘ticktickticktick’ – and waits for me to handover my Rs.5 bus fare to the railway station. He barely jolts as the bus moves.

The 7:50 slow has just pulled in. Most people jump in before the train stops. I never leaned how to do that, and as a result I only manage to find a corner seat.

This is the Ladies First Class. It has softer seats. I recognize most of my fellow travellers. They are regulars – mostly bankers and students – and I’ve pieced together their stories from overheard conversations. They are ‘train friends.’ A clique has formed during our daily commute. They discuss marital problems, trade dirty jokes and have potluck breakfast parties. When they bring Prasad, food offerings made to the Gods after special prayers and during the festive season, they share with the rest of the compartment too.

Because it’s morning rush hour, there are no vendors peddling knick knacks or fruit. They will come later, with their big baskets, and stay on till the last train. From the grill window barrier I can see into the General First Class compartment. Some men gawk at the women. Others fiddle with cell phones. 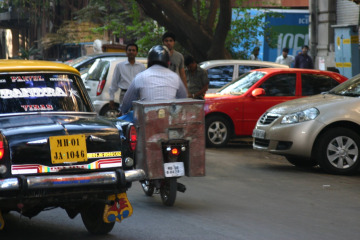 The taxi queue under the Dadar Flyover is the only element of order on a road crammed with office goers and vendors selling fruits, gajras (flowers strung together and fastened by women in their hair) and other knick knacks. When the municipal car comes they use a series of coded calls to pack and empty out in minutes; it was during one such raid/run that I realized the street was actually wide enough.

A guy joins the line behind me. “Share Taxi, na?” he asks. A shared taxi runs between a preset route and carries 4 passengers, each will pay Rs.10 for the ride irrespective of where they get off along the route. It’s more comfortable than a bus and it’s cheaper than taking a cab alone.

I’m sharing the cab with a pin-stripe pantsuit, an orange salwar-kameez and a green tee-shirt. The cab is old and its insides feel tired. The window is stained and only opens midway. When we stop at the traffic light a kid approaches me with a stack of pirated books. His clothes are ill fitting. His smile is wide; he has seen the open book on my lap.

“Didi, best books for half price. Didi!” he yells as the light changes.

We cross two worlds at a distance of two traffic lights. On one end are the community housing projects, public schools and gaudy store fronts. At the other are MNCs, showrooms and malls; Mumbai’s textile mills once stood here. I’ve heard the stories from my Dad – of the good years, of the strike and how most mills shut down in the years after. I catch the emotion before he shrugs and says, “anyway…”

At the end of the street, the taxi comes to a noisy halt two minutes away from my office. I gather my bag, my jacket and paperback, pay the cabbie and get off. Today I have a brochure to finish and blogs to read. I punch in my key card and head back out for tea.

Tagged
Expat Life Mumbai, India
What did you think of this story?
Meh
Good
Awesome

11 Signs You Were Born and Raised in Mumbai