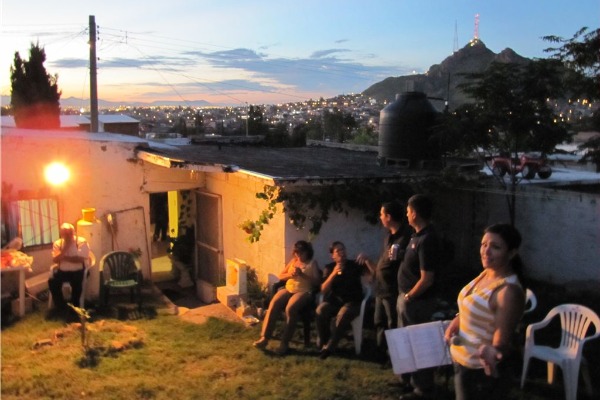 Family karaoke in Chihuahua, All photos by author

Every holiday Mexico is a fiesta, but not all celebrations are also Christmas miracles.

I’m spending my seventh Christmas in Mexico with my husband’s family. The drive south through the windy desert always has me drooling for the Christmas Eve feast ahead. My husband is grinning; he lives the farthest away from his family and misses them daily. After a four-hour drive, we arrive.

My mother-in-law’s brightly painted house is smaller than my first apartment, but we are welcomed in by more than 30 hugs and kisses. Nieces, nephews, and my sister-in-law Lupita’s poodles scamper underfoot while we are shuffled in the packed home.

It’s hard to believe it wasn’t always like this. There was a time, my husband tells me, that his five brothers and sisters did not get along.

Petty fights had created a rift in the family, a family who had built this small house on the mountain together years ago. Breaking up the rock to lay the foundation, building a fence from ocotillo cactus, carrying water and ice for miles before indoor plumbing and electricity, they knew how to work hard as a team. They lived near each other; yet, they no longer spoke to each other, anger over small arguments repelling them apart.

Then with the force of an earthquake, a stroke shook the family. My husband’s hard-working father was hospitalized, and quickly lapsed into a coma.

Weeks later, when money ran out, the only choice was to bring their comatose father home and care for him themselves – 24 hours a day. With instructions from the hospital, they learned how to bathe him, dress him, feed him, and move him to prevent bed sores. The brothers and sisters and their mother took turns caring for him, beginning to talk to each other again when one’s shift ended and another’s began. 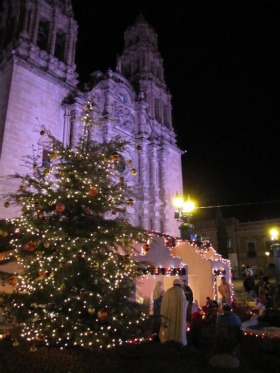 For months this family unwaveringly cared for their father. Nurses came by to check on him from time to time, praising the family. His condition was the best they had ever seen for a home-care patient. The praise helped the family press on through exhaustion, continuing to care for their father for hours each day. Soon, they hoped, he would awake from his slumber. They prayed for a miracle.

We make it into the kitchen. Two turkeys and a whole pierna pork leg this year. The family is growing so fast, my mother-in-law explains, “Un pavo no era suficiente!”

Yolanda, my sister-in-law, pushes into the kitchen with her family of four and an enormous basket of buñuelos. Seeing my excitement, she lifts the cloth and motions for me to sneak one. These light and crispy Mexican elephant ears delight my tongue while cinnamon and sugar encrust my lips. It will be hard to hide that I got a sneak preview of the feast to come since crispy bits of fried goodness cover my shirt and my lap is sprinkled with sugar. At least the kids are distracted with the presents under the tree in the other room.

The women are stacking the final layer of cornhusk-wrapped tamales in a pot that could hold a whole pig. They made the red pork ones this year, my favorite!

Someone smacks a hat with stuffed reindeer horns on my head while Lupita quickly serves us cups of ponche. It reminds me of hot apple cider, but is ten times richer with layers of guava, orange, tejocote, dried red flower jamaica, pecans, raisins, and spices. I sip the delectable beverage very slowly, relishing every mouthful. There is only enough for one cup each and I don’t want to wait in line for the single bathroom just yet.

The praise helped the family press on through exhaustion, continuing to care for their father for hours each day. Soon, they hoped, he would awake from his slumber. They prayed for a miracle.

The party follows her out to the small backyard. My husband’s 30-year-old niece is a singer and she has brought her microphone, speakers, and keyboard player along. There will be a concert on the backyard slope tonight. And later, when tequila flows, it will become family karaoke.

Neighbors come up to the fence, now a concrete wall, to greet everyone outside. There will be no complaints about the noise. In fact, the neighborhood is filled with small houses, each blasting festive banda music or mariachi. Neighbors are also greeting each other in the road. “Feliz Navidad!” they cry.

Back in the kitchen, kids are eating first at a table that can handle only six at a time. Steam rises from the tamale pot. The smoked turkey, previously injected with orange juice, now oozes from the fresh cuts. Laura scoops food onto each plate. Ensalada de manzana is a kid-favorite, with cubed apples, mixed with mini-marshmallows, pecans, raisins, coconut, and drenched with cream. Others prefer the spaghetti, a little sweet and soupy, like a homemade version of spaghetti-Os with cheese and basil.

My husband’s brother hands out beer, wine and tequila to those mingling in the kitchen. Now it’s our turn to eat. I giggle, maybe from the wine, or from the lively atmosphere of this warm family gathering. Food and conversation are satisfying. Laughter fills the home. 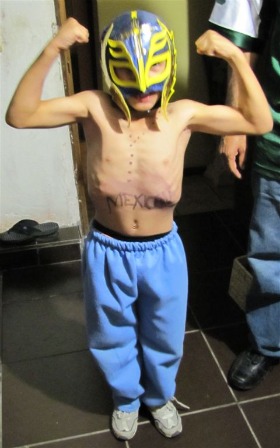 Starry-eyed children begin to open their presents. Six-year-old Isaac runs around wearing his new wrestler mask, posing to show off his muscles. Karaoke ensues, everyone eats and laugh until it’s almost midnight, time to move inside.

Clink! Feliz Navidad! Everyone toasts and shouts loudly to drown out guns firing into the air outside. The dangerous tradition often results in Christmas deaths from stray bullets of drunken celebrators.

The party winds down and the adults huddle to discuss tomorrow’s Christmas day plans. What time will we meet?

“La misa en el panteon empieza a las doce,” says my husband’s sister Irma. The cemetery chapel’s mass begins at noon. We will spend Christmas day with their father, on the anniversary of his death.

As we gather around his grave in the sunshine the next morning, I admire the sparkling, white marble casket raised from the cement. Brightly colored flowers adorn all the graves, and we are not alone here. One family cries around a grave covered with a pile of palm fronds, a recent burial. But most talk and smile; they are here to celebrate Christmas with their loved ones, too.

My husband’s family now works together to clean their father’s grave, replace the flowers, and sweep the perimeter, taking care of him even now as he rests. My mother-in-law recites the Rosary while her family stands together around their father.

Dedicated to the memory of Gilberto Martinez.