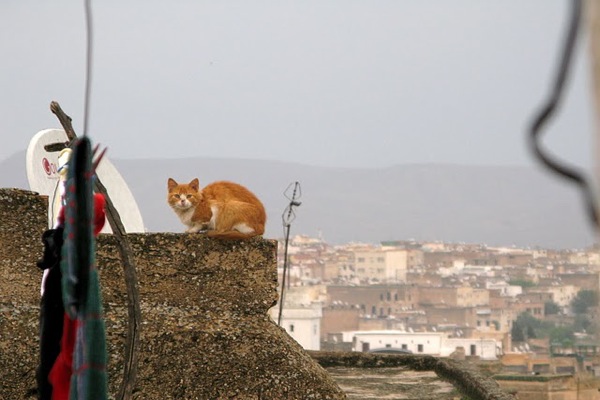 A sudden water scare in Fes reminds an expat of his inherent vulnerability.

Saturday was the first day all week I didn’t need to wear my rain jacket to walk out the door. It was also the day the whispers began all throughout the medina, and grew to a frenzy.

After almost a whole week of driving rains, culminating in an all-day deluge on Friday, a friend and I spent the morning exploring the Old City and returned to the local salon de thé for lunch in the garden. I was up to my elbows in chicken tajine, baba ghanoush, and cinnamon-spiced potatoes when Denny showed up.

A middle-aged American photographer living in the Fes medina, Denny is a big talker – the kind of ultra-friendly guy who might finish his drink, say goodbye and then tell you three long, intricate stories before he actually leaves. Something about the quantity of Denny’s stories has always made me suspect their quality, and the information he delivered on this afternoon only confirmed my doubts.

He strode into the garden, glowing, like an Oscar winner on his way to the podium. Unable to contain himself, he immediately announced, to no one in particular, “Have you all heard the news? They found three dead cows in the water supply today, so now they’re going to cut off the whole city’s water for three days.” 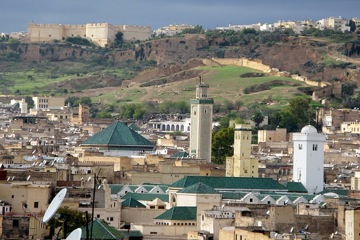 Stunned silence, and some obvious disbelief, hung in the air. As if it proved anything, Denny reassured us, “It’s true. Just heard it.”

An hour later I was in a taxi and I explained to the driver what I had heard, as taxi drivers are known in Fes as reliable sources of popular gossip and rumor. “Waash kul haad saheeh?” Was all this true? Yes, sadly. Starting tomorrow, they will cut off the medina’s water supply, and maybe all of Fes’s.

When I returned to the salon de thé, the French owner, Cecile, told me I had just missed the city government representative who had passed by to officially inform all restaurants and cafés: at midnight that night, three days sans eau would begin. Cecile, now quite flustered, ran through the implications: How will we flush the toilets? How will we wash the dishes? Will there be bread? How much water do we need to buy if we stay open?

By dinner time, the standard 5-liter jugs of water that usually sell for 10 dirhams were up to thirteen and climbing.

The kids on the stoop outside our apartment were enjoying this, in the way that kids back in the US enjoy approaching blizzards, hurricanes, and other catastrophes which worry their parents and hold the promise of school cancellations. They laughed when I told them I was going upstairs to take three showers. (Whether they laughed at the joke, my Arabic, or the concept of a daily shower I just don’t know). 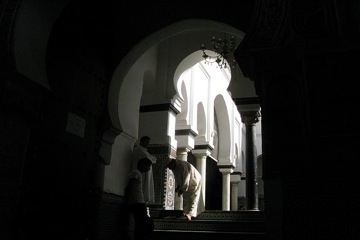 A few members of the Fulbright group gathered at our apartment that evening. All had heard some story about the water being contaminated, either with dead animals or from muddy runoff from the rains.

We did the natural thing when faced with an impending crisis – drank beer and played cards. In between each hand, I scurried to the bathroom to switch out the bucket under the running faucet and replace it with the next empty one. Like everyone else in the Old City, we were stockpiling.

As the evening progressed, it occurred to us how bizarre was the government’s decision to continue dispensing water to the city when they knew it contained dead cow particles. Why didn’t they just shut the supply off immediately? And what was the point of everyone’s hoarding contaminated water? Perhaps the local water department had concocted the story itself, someone surmised. 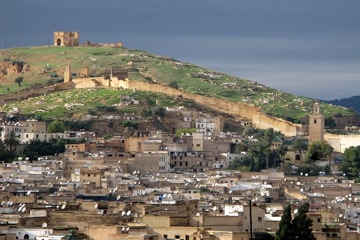 The first sound I heard when I woke Sunday morning was Ryan running the faucet in our bathroom. The water was still flowing.

After all their frenzied panicking of the day before, the Fassis suddenly acted as if nothing had happened. Only when I brought it up would the water situation get a mention: “Oh, yes, that water situation. Well, they shut off the water in the Sidi Bou Jida neighborhood, but not all of Fes, so it’s fine.”

A few, still alarmed, said that the city was using the last of its clean water supplies now but would soon run out, and could cut the flow at any moment. Even they soon forgot it all, and the frenzied panic of the previous day dissipated as quickly as it had arisen. By the time we got to class Monday morning, neither of our professors could be convinced that they knew anything of any such water crisis.

The speed with which a whole city reached full panic mode and then returned to normal only made the incident seem more surreal. I’m still a bit dazed.

But then, I expected surprises here, as I wrote soon after arriving. The popular advice “so long as you are in Morocco, let nothing surprise you” captures the great irony of successfully living abroad, precisely because it is impossible to obey.

No visitor to Morocco can avoid being utterly baffled sometimes by daily occurrences here, and those who try to know what’s around every corner merely frustrate themselves. 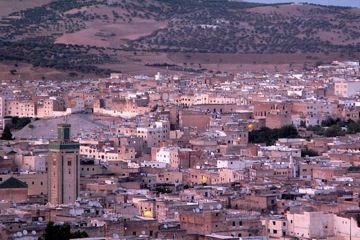 Being completely bowled over by Morocco is like being the brunt of a friend’s practical joke. It makes you feel vulnerable, and the natural reaction is to lash out, to erase the vulnerability. But at that moment, embracing one’s vulnerability, accepting that you were fooled, and laughing along with your friend can bring you to a new level of familiarity and trust.

And so the saga of this weekend, which all began with three allegedly dead cows allegedly in a reservoir and ended the same as any other weekend, was simply another reminder that I live in a medieval city, and that sometimes it will act like a medieval city, and that maybe I just need to learn to sit back and enjoy it. It might just be the start of a solid friendship.

What we can learn from countries with progressive transgender rights
The ultimate floating tour through Montana, from Yellowstone to Glacier National Park
20 of the funniest idioms for people learning English
30 awesome Japanese idioms we should start using in English
Wildfire burns over 850 acres of Texas’ Big Bend National Park

The 18 best digital nomad visas from around the world