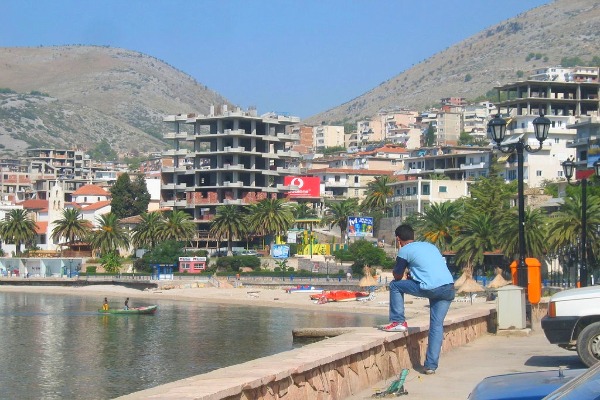 Kristin Conard reflects on a brief connection with a local in Albania.

Saranda, on the Albanian Riviera, is wildly popular with locals for honeymoons, but I wasn’t in a romantic mood.

I was headed to the café with my book and my journal, and I was ready to indulge in an hour or so of self-pity and reflection.

For just the day before, the man I was traveling with, the man who had come to meet me at the airport, the man I had already labeled in my head as edging towards being a significant other, had unexpectedly hopped on a bus to a town six hours away and had told me he’d miss me, but had also said, “I need to go my own way at the moment.”

I was preparing to be able to respect that, but in that moment, all I wanted to do was get my coffee and try to sort out how I felt knowing I’d likely not ever see him again.

We went through a dozen cars this way. Each time I correctly guessed the license, she pat my hand or squeezed my shoulder. In between cars, she talked. About what, I have no idea.

Usually, knowing that no one at the café spoke English and that I didn’t speak Albanian would make me slightly frustrated about not being able to make myself understood and then slightly ashamed at coming to a country with no knowledge of the language. But that day, I was more than pleased to isolate myself.

This was the same café he and I had gone to, and it was here that we’d managed, after a lot of trial and error, to get a coffee with steamed milk. It’s fairly difficult to mime steamed milk, and we’d been so pleased to finally get what we were looking for.

Our guilt at demanding our specific coffee desires was washed away with the bright and friendly smiles of the small, round elderly woman who ran the café and seemed just as pleased as we were that she had understood our pantomime. 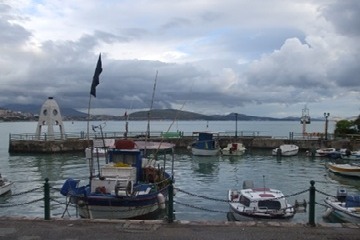 She saw me coming, and my drink was ready by the time I got to the counter. The woman gestured high in the air and seemed to ask a question.

I smiled apologetically and shook my head. What did she mean? She pointed at me and then at the air beside me and again at the air.

Ah, she was asking where my companion was; he was tall.

I shook my head again. “Berat,” I said, the name of the town where he’d headed.

She clucked her tongue in disapproval. I nodded my agreement as I grabbed my coffee and headed outside. I picked a table outside the café, under the shade of the palm trees with a view of the main drag in Saranda.

I opened my journal and started to write. After a few minutes, the proprietor bustled her way outside and came to sit down at my table. I looked up in surprise.

“Berat,” she said, gesturing at the empty chair next to me and then pointed down at the ground, “Saranda?”

I assumed she was asking if he was coming back. I shook my head, and she threw up her hands in disgust. My thoughts exactly.

She started speaking slowly to me in Albanian, the idea that because it makes such obvious sense to you, if you just say it slowly enough, a foreigner should understand, a technique I was pleased to know wasn’t just employed by Americans.

How else could I respond but to continue to smile and shrug? She lapsed into silence.

I wanted her to leave; I wanted to be able to sit and think and dwell on life, the universe and everything, and here she was interrupting my reverie.

But what could I say? What could I do? I clicked my pen a bit anxiously. What hints could I give without being obvious?

We both watched a car drive by, slowing down to bump its way over the old rope stretched across the road, used as a low cost, surprisingly effective speed bump. The license plate started with the letters “SR”.

“Saranda,” she said, pointing at the car. I nodded my head.

The next car had “GK” on the license plate. “Gjirokastra.” The name of a town a couple of hours away. I nodded again.

She beamed at me, and clapped me on the shoulder. I smiled a bit giddily at her approval. 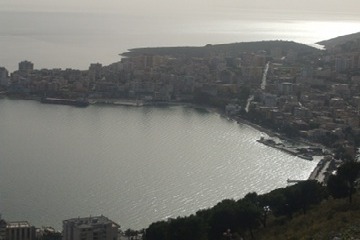 We went through a dozen cars this way. Each time I correctly guessed the license, she pat my hand or squeezed my shoulder. In between cars, she talked. About what, I have no idea.

But she was bringing me out of the shell I’d so badly wanted to retreat into. There was no way to be self-indulgent and broody without being rude to this woman.

I found myself studying her. It dawned on me that she was wearing the same dress she’d worn every other time I’d seen her. A clean, but worn, shapeless shift with brown and tan flowers. Her hair was grey and curled aimlessly around her face. Smile lines creased her face, but the deep worry lines in her forehead matched them.

My guess was that she had lived here her entire life, through communism and upheaval. I wondered if she’d had her heart broken or broken any hearts herself.

As I finished my coffee, she got up, leaned over to give me a hug, and then walked back into the café. I came to that café everyday for two more weeks, and while she always greeted me with a happy and welcoming smile, she never came to sit with me again.

I wondered if she had sensed my malaise that day, and though we couldn’t understand each other, she had reached out to pull me out of myself.

What did you think of this article?
Meh
Good
Awesome
Bookmark
Posted In
Narrative
Destinations
Albania