“First of all, it is absolutely not safe to travel by motorcycle in Haiti…I totally discourage you to travel this way…Two foreigners on a bike are bound for trouble…” the National Geographic adventure photographer warned us. I think we had two very different ideas of what adventure really is.

With that in mind, my boyfriend Narek and I packed ourselves and a week’s worth of amenities onto a motorcycle and rode around the south coast of Haiti. We barely knew the language, stayed with whoever we met along the way, and saw parts of the country the media never shows. It was an incredible way to discover a country that turned out to be richer than anyone seems to know. 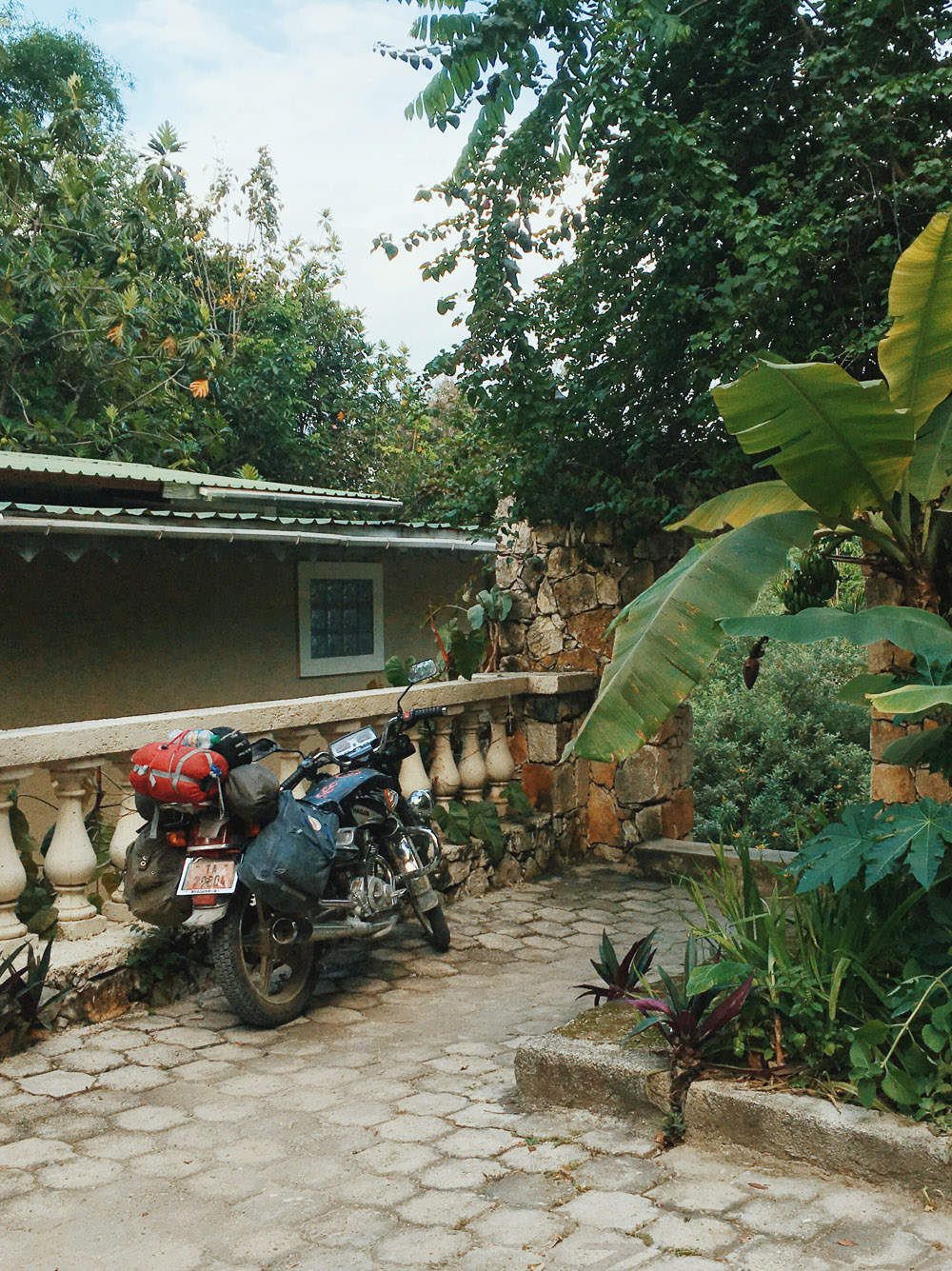 The bike is all packed up at Fabien’s

My friend Fabien met us at the airport and drove us to the guy who would be renting us his motorcycle. It was a tiny, cheap 125cc Haojin (what every Haitian rides) and we wondered how it could possibly support two people and a week’s worth of stuff over a cross-country tour. But when you see the things Haitians carry on these bikes and the places they take them, you broaden your concept of what is possible. 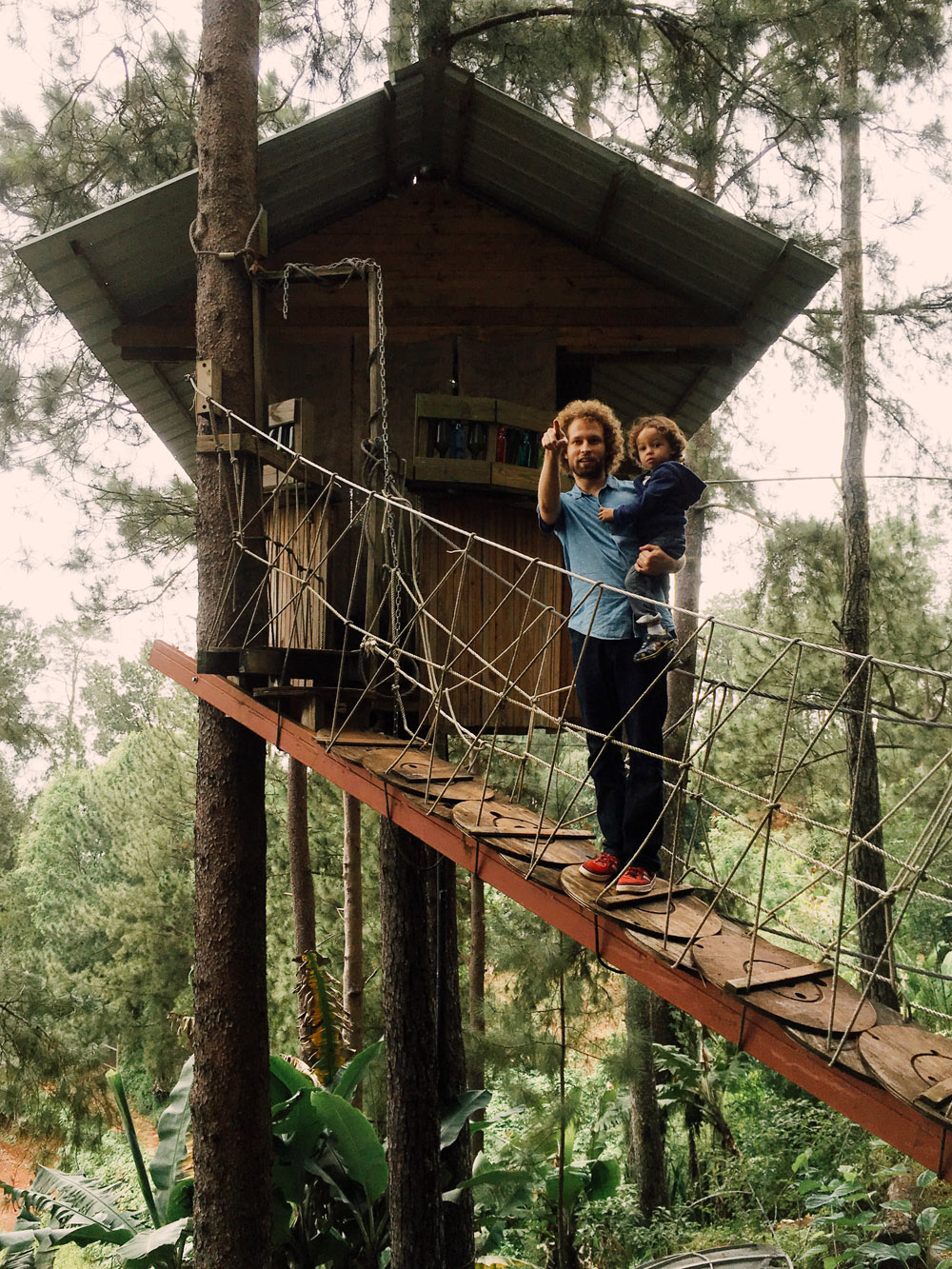 Fabien suggested a mountain road ending at a treehouse bar that would be perfect for testing our limits before we went out on our own. So in a misty rain, past a Vodou ceremony, around a loose horse, up and down steep, crumbling rock we managed our way to the bar without any problems. We had some drinks, Fabien rode a horse; this was going to be breeze. 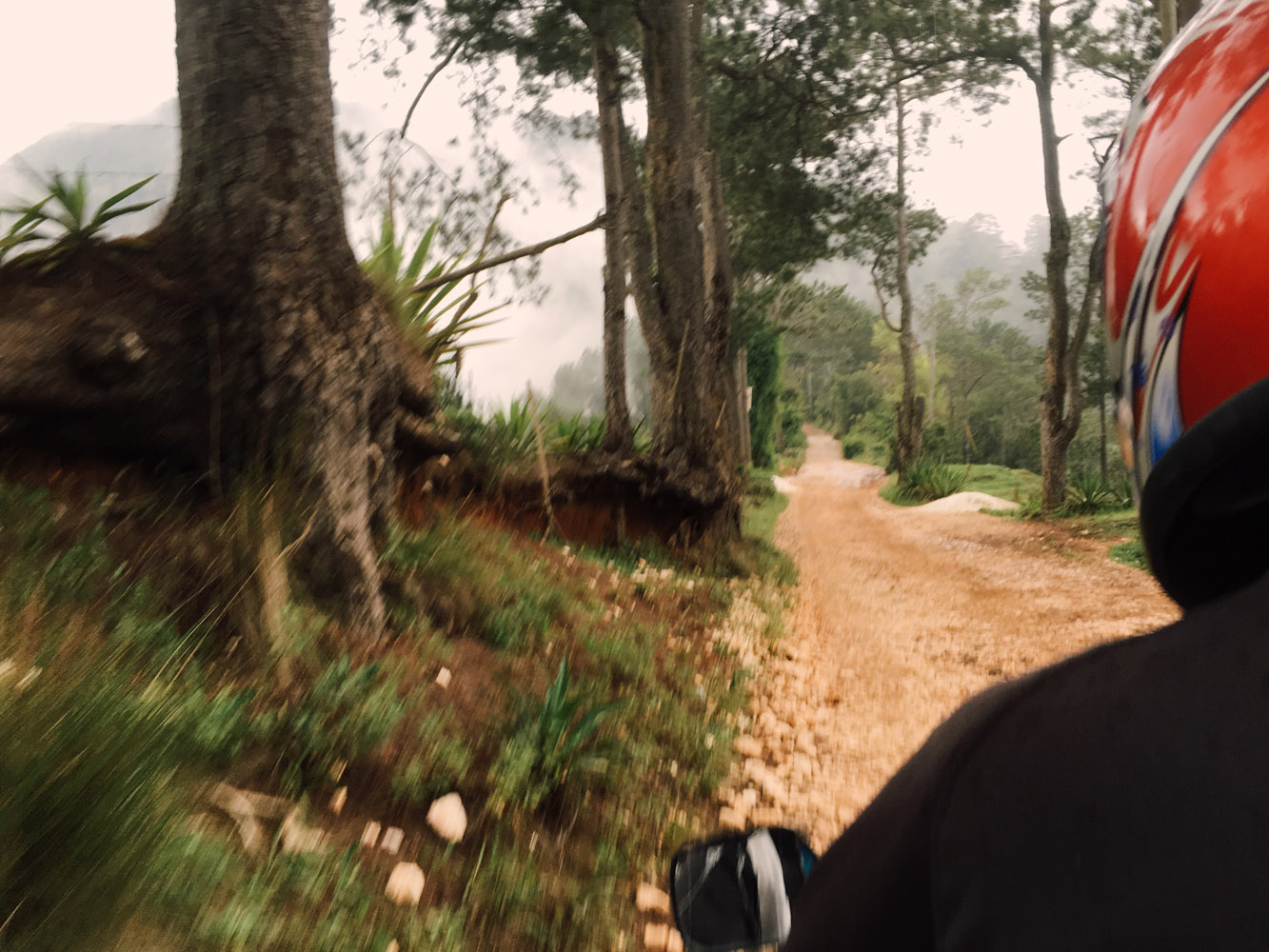 As soon as we left the bar, however, the trouble started. We were following Fabien’s car up some switchbacks when we dumped the bike and lost our back brakes. Limits: found. We got going again, but Fabien’s car hadn’t stopped. His son was having health issues and we assumed they had rushed to the hospital. We’d left our money in the car, had no phones, no phone numbers, no address…these were things we intended to sort out later that day. 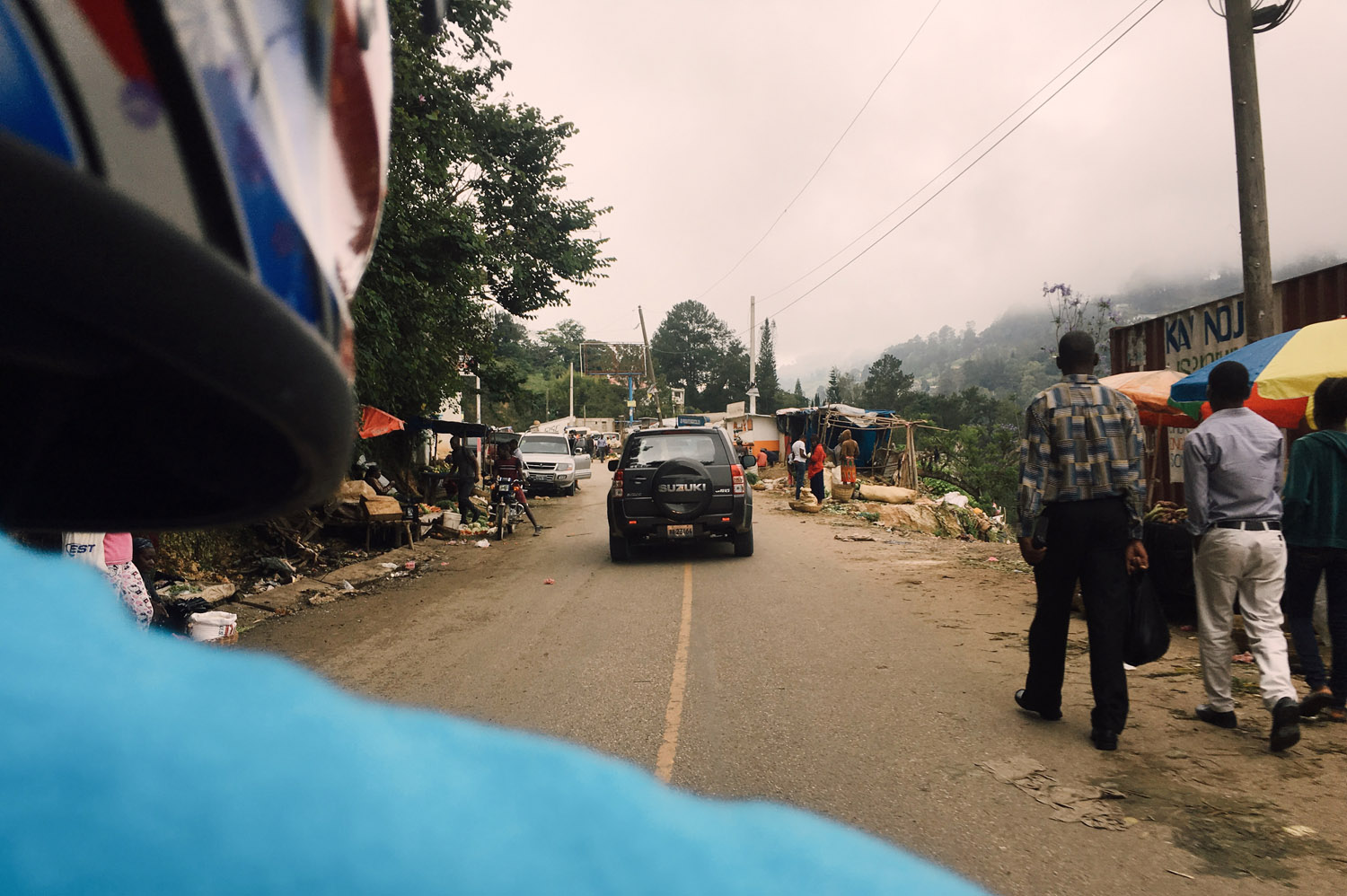 We kept on riding though and luckily, once the countryside became stacks of buildings again, we found a hotel with wifi. We made contact with Fabien (he had indeed gone to the hospital) and got back to his place, excited to have passed our first test. 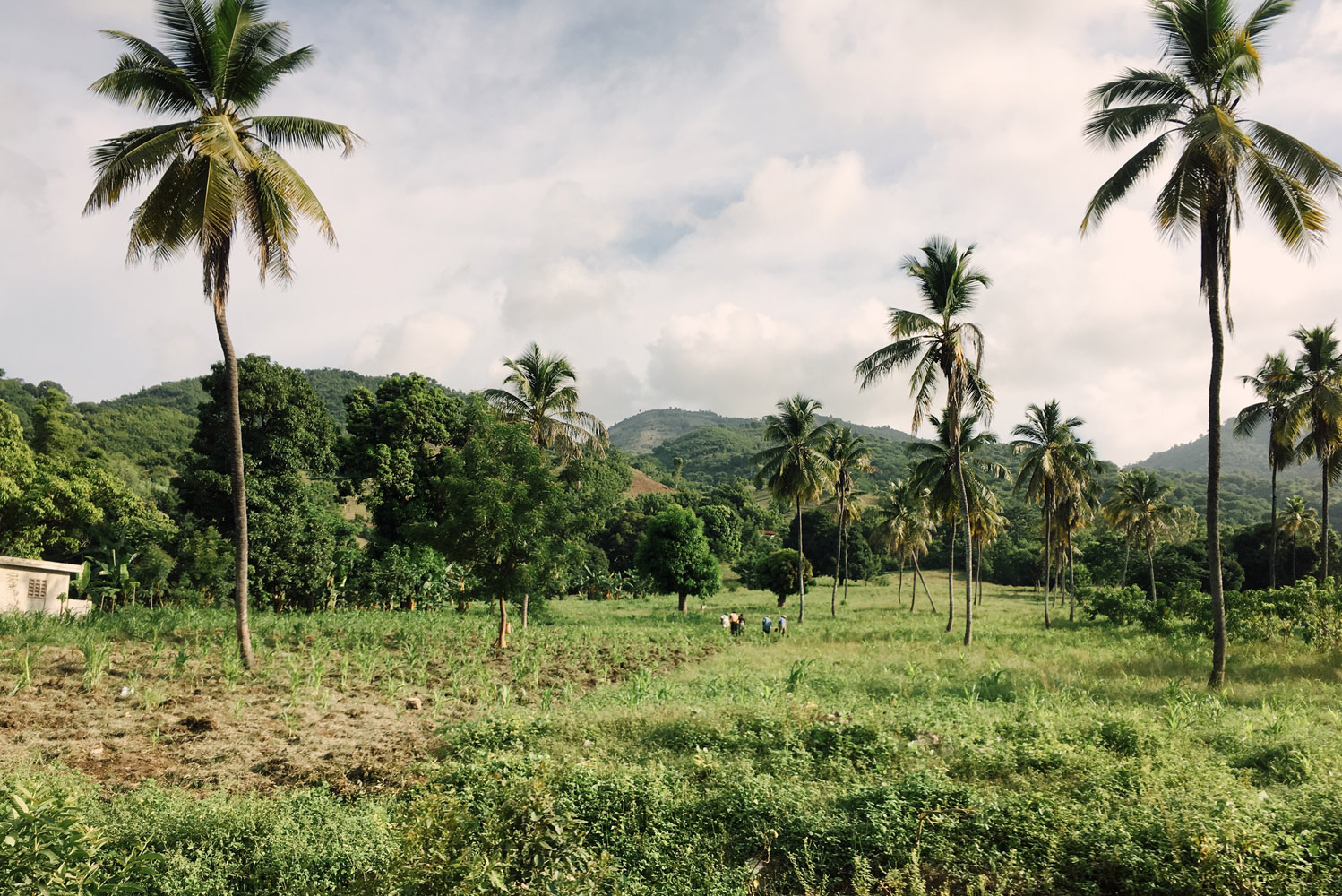 We tried for an early start on Monday. The lack of brakes combined with a wet, steep incline proved difficult and we dumped the bike again within the first minute of riding. Basically our only real goal for this trip was to stay the hell out of the city, but the priorities were clear: our first day on the road would begin with the most insane motorcycle ride I’ve ever been on through the absolute worst part of the city to get our bike fixed in north Port-au-Prince.

The shouts of “Blan! Blan!” (meaning “white” or “foreigner”) quickly faded into the eternal murmur of horns and haggling. The grey muck and miles of trash that flooded the streets were an obstacle as substantial as the traffic. At one point a cop pulled us over but the charms of our language barrier softened him up and he let us go. I have no words for the madness and chaos that takes place there on a regular basis but just know that in Haiti there are no rules. I also have no pictures of this because I was holding on for dear life. 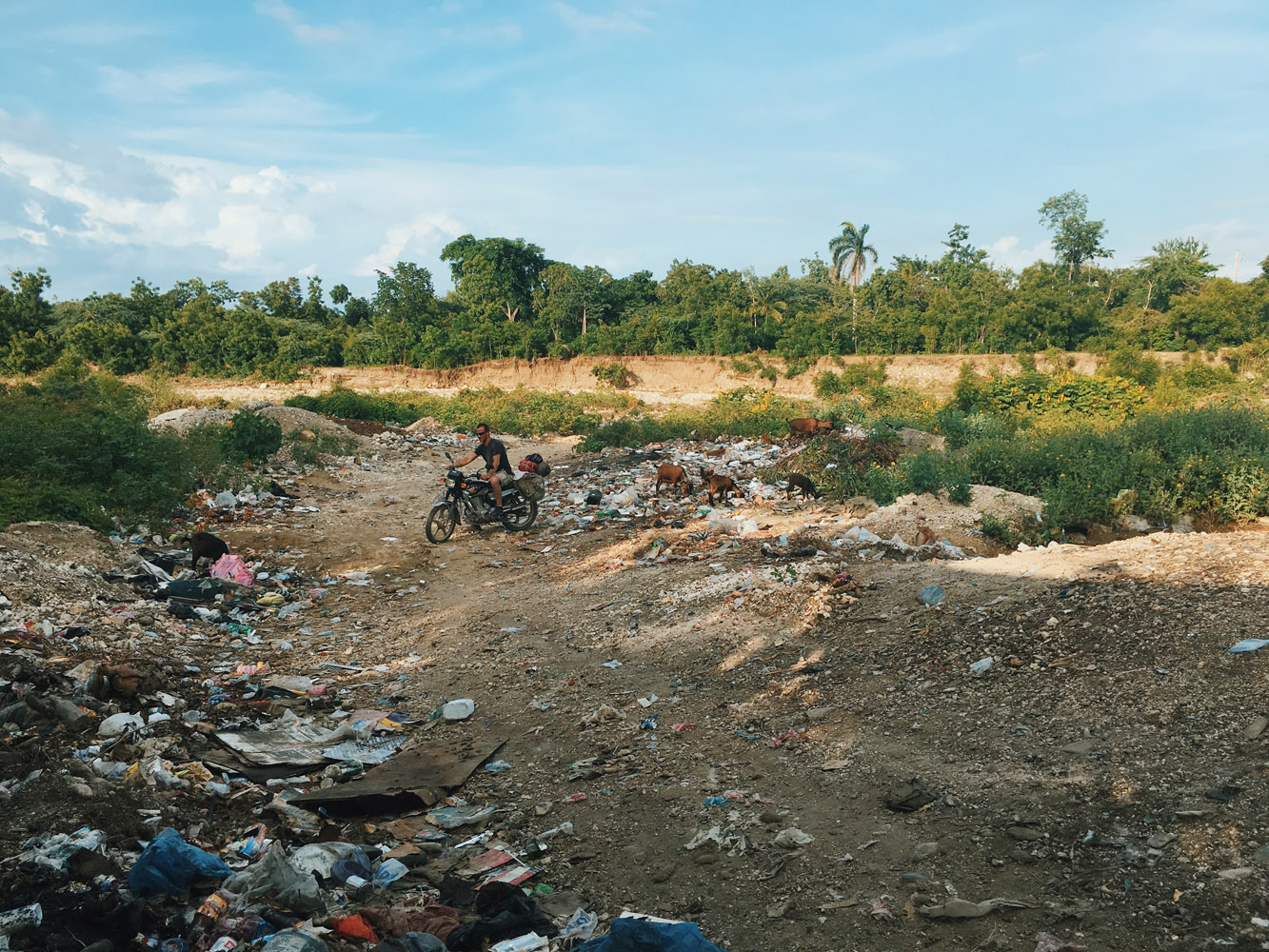 One of our wrong turns

Somehow we made it to the shop and, with much relief, rode for hours through the countryside to find a small village nobody seemed to know and whose name roughly translated to something like “Hole in the Wall”. Below the village is a beach that can only be accessed by boat, but I had read of a secret trail somewhere along “a dirt road about 10 minutes past Petit-Goâve.” In the dark we climbed up what we hoped was that road and eventually met a villager, Jean, who offered to keep our bike at his house and take us to this hidden beach. 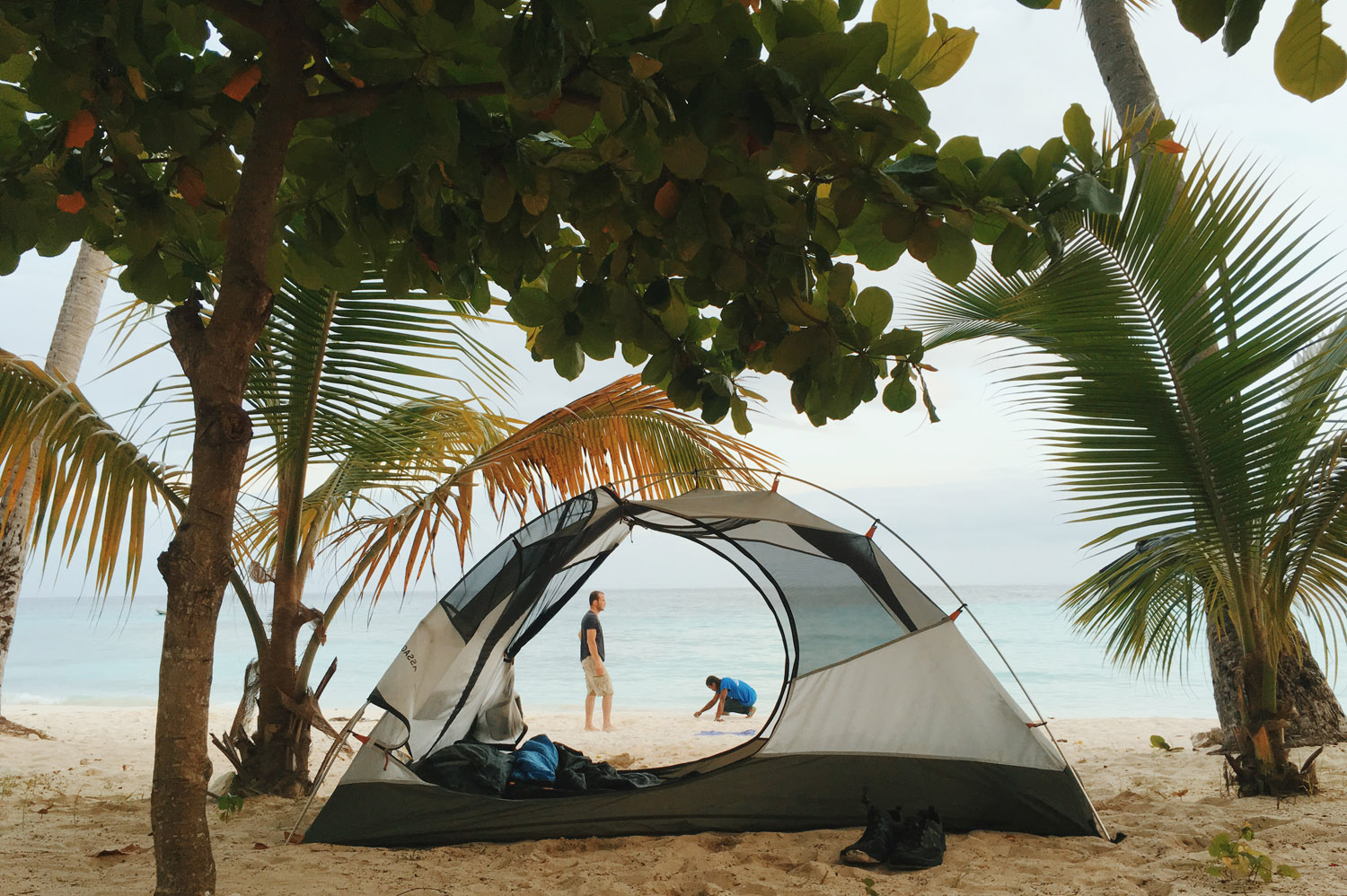 We had descended to the beach in muddled moonlight but dawn’s glow affirmed all of our efforts. We had slept beneath an almond tree and were sharing this immaculate beach with only a few locals, who brought us some conch for breakfast. I spent time as a remarkably pale object of interest for some of the children while Narek and Jean charaded and pictionaried their way through conversation. 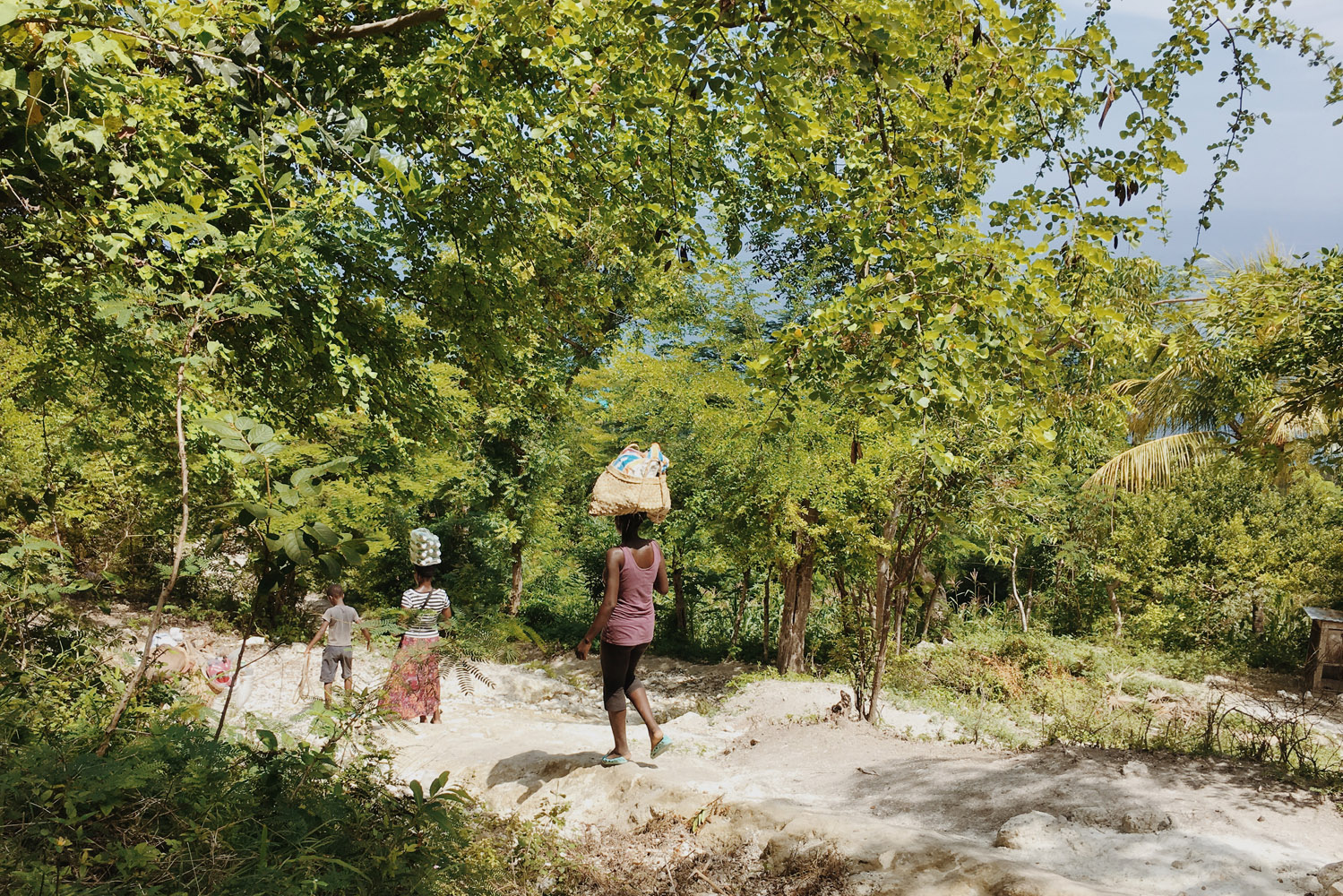 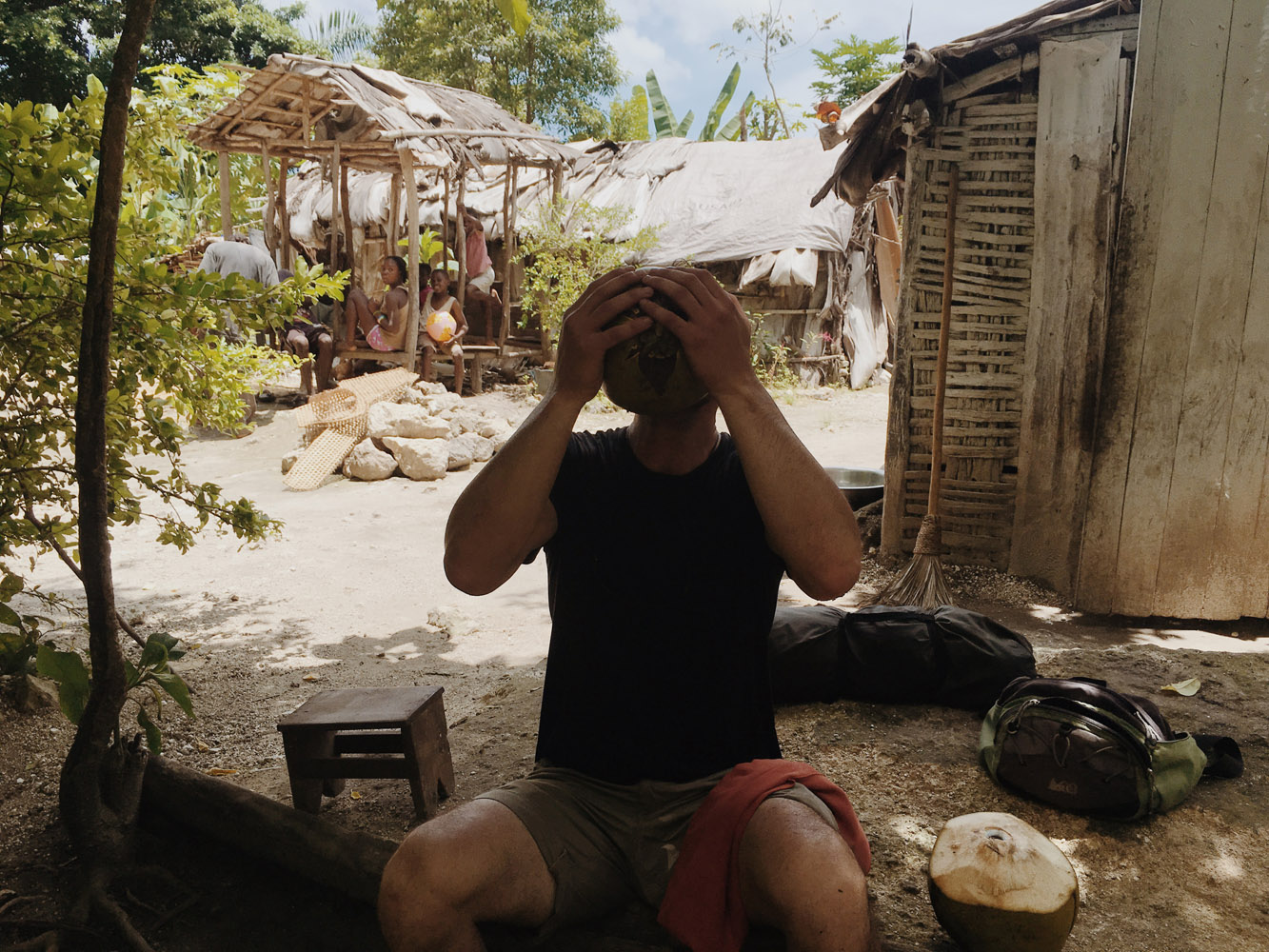 The hike back was relentlessly vertical, with Jean insisting on carrying both of our bags while Narek and I slowly died. In classic form, we had failed to bring any water or food. So when we reached the top, Jean was quick to slide up a tree and revive us with some coconuts. 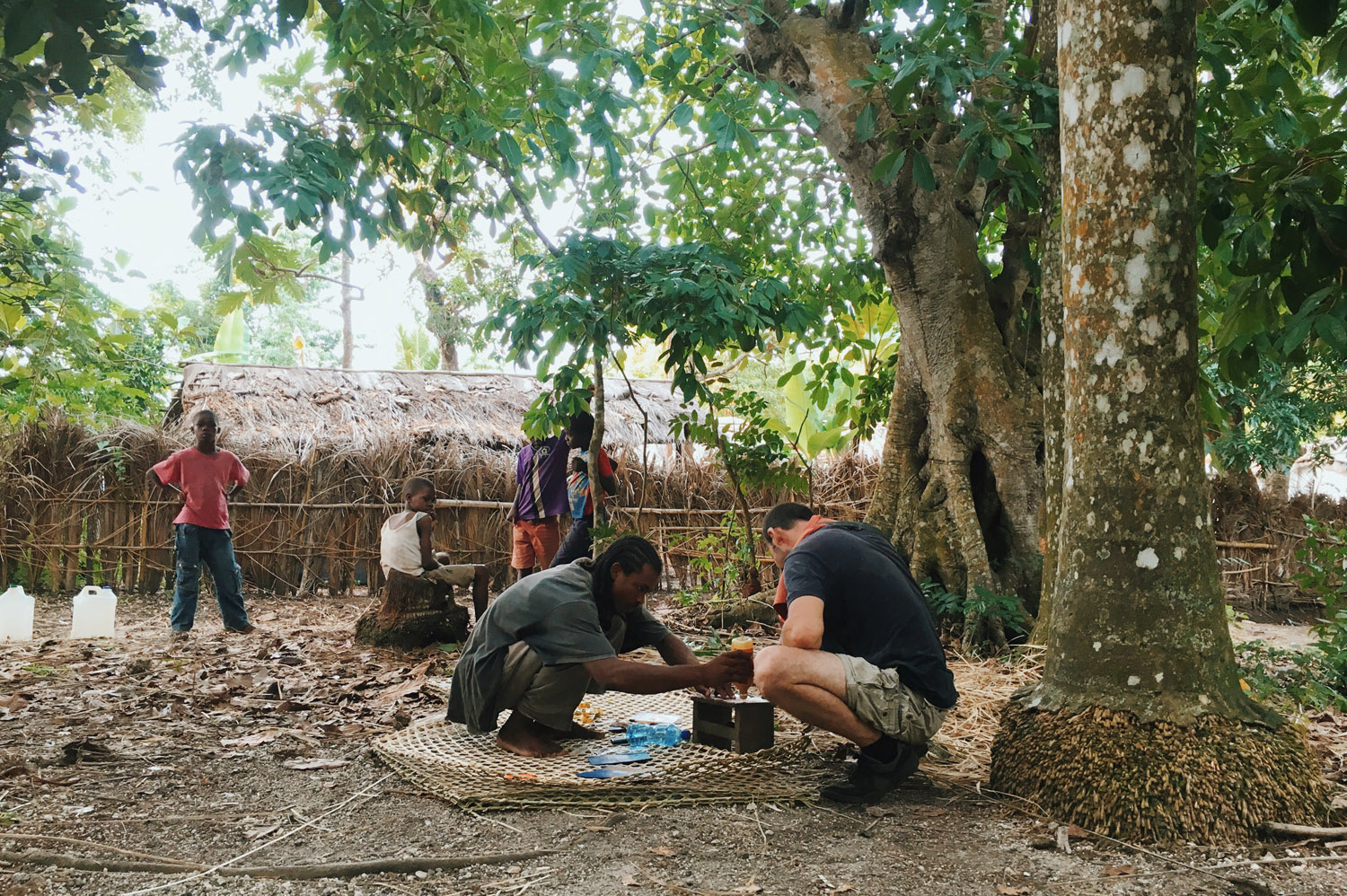 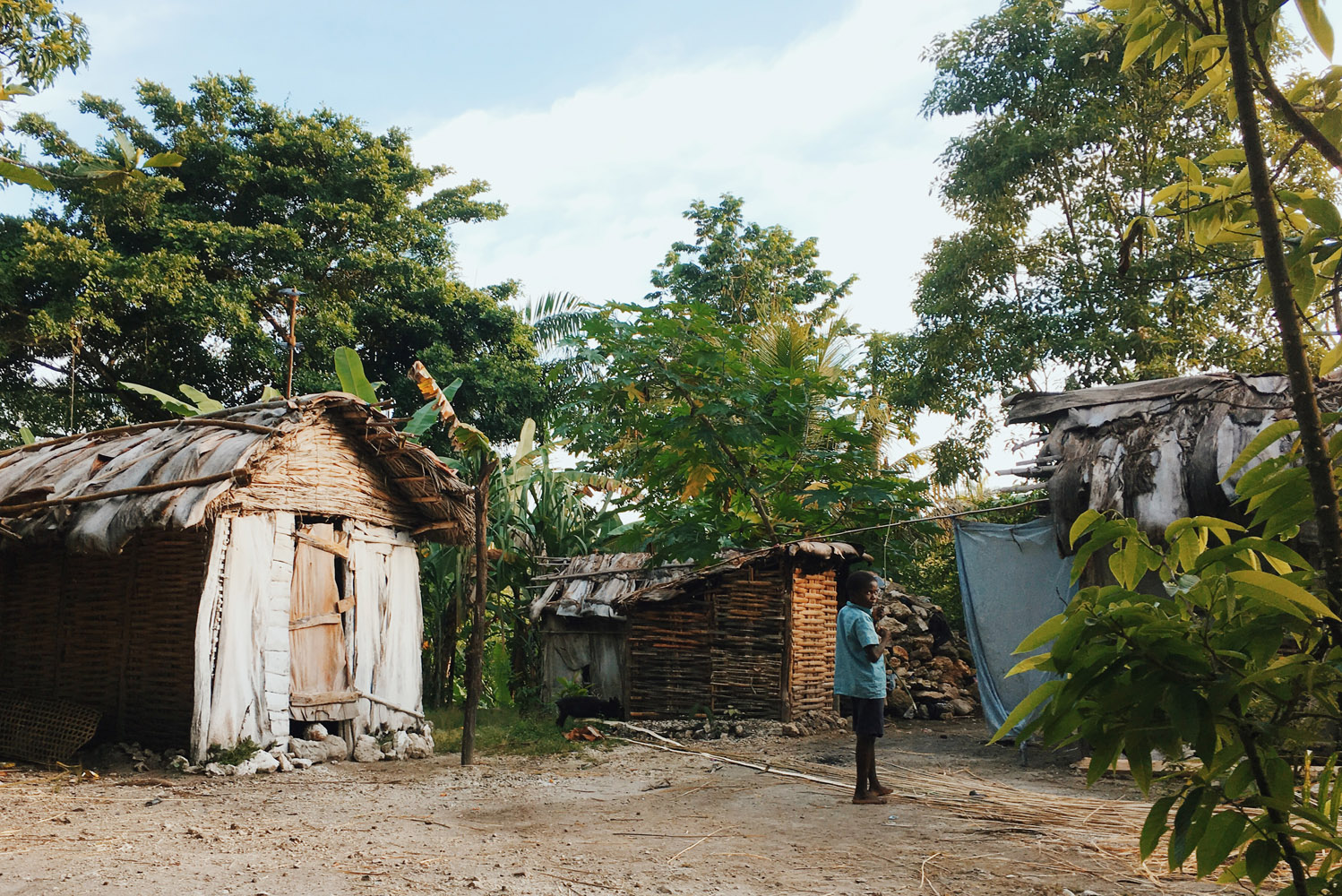 The good vibes flowing through the village were too strong to resist, so we decided to stay for a night. Jean is an artisan and worked on his crafts all day while Narek and I learned and absorbed as much as we could. It was the kind of day where you never even put on pants. 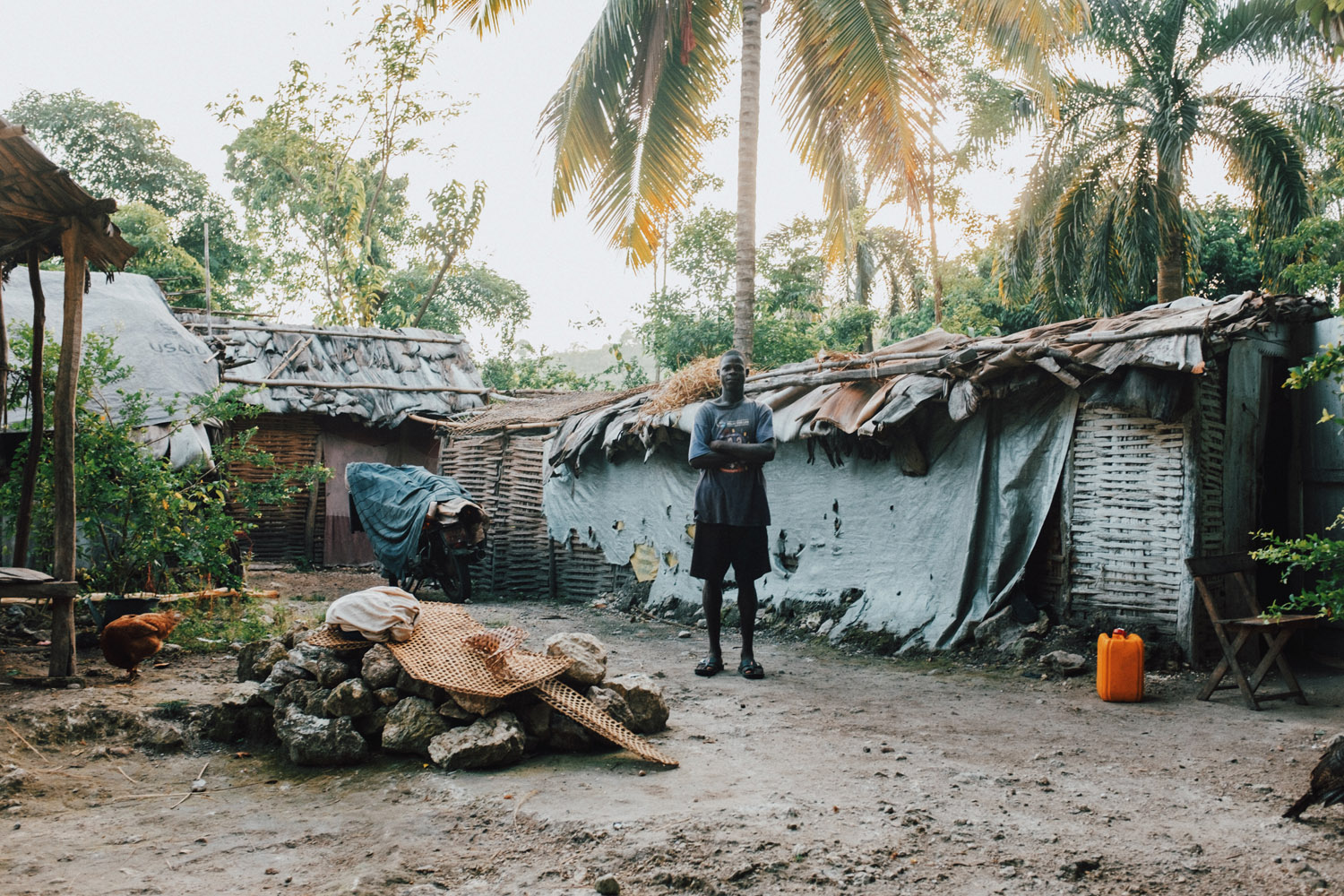 That night various family members slowly lay on the ground with us, guarding us and falling into sleep in perfect communion with the encroaching darkness. I lay in the hammock, fireflies floating above, a man in the distance singing a heart song. The whole jungle was singing a heart song and I had want for nothing.

We awoke early to a Vodou priest creeping around an abandoned structure behind us. Jean prepared breadfruit and *spicy* eggs and pikliz for breakfast and soon we were back on the road, with hearts so full. Finally in Les Cayes and after much exchange all over town, we caught a fishing boat to the island of Île-à-Vache. 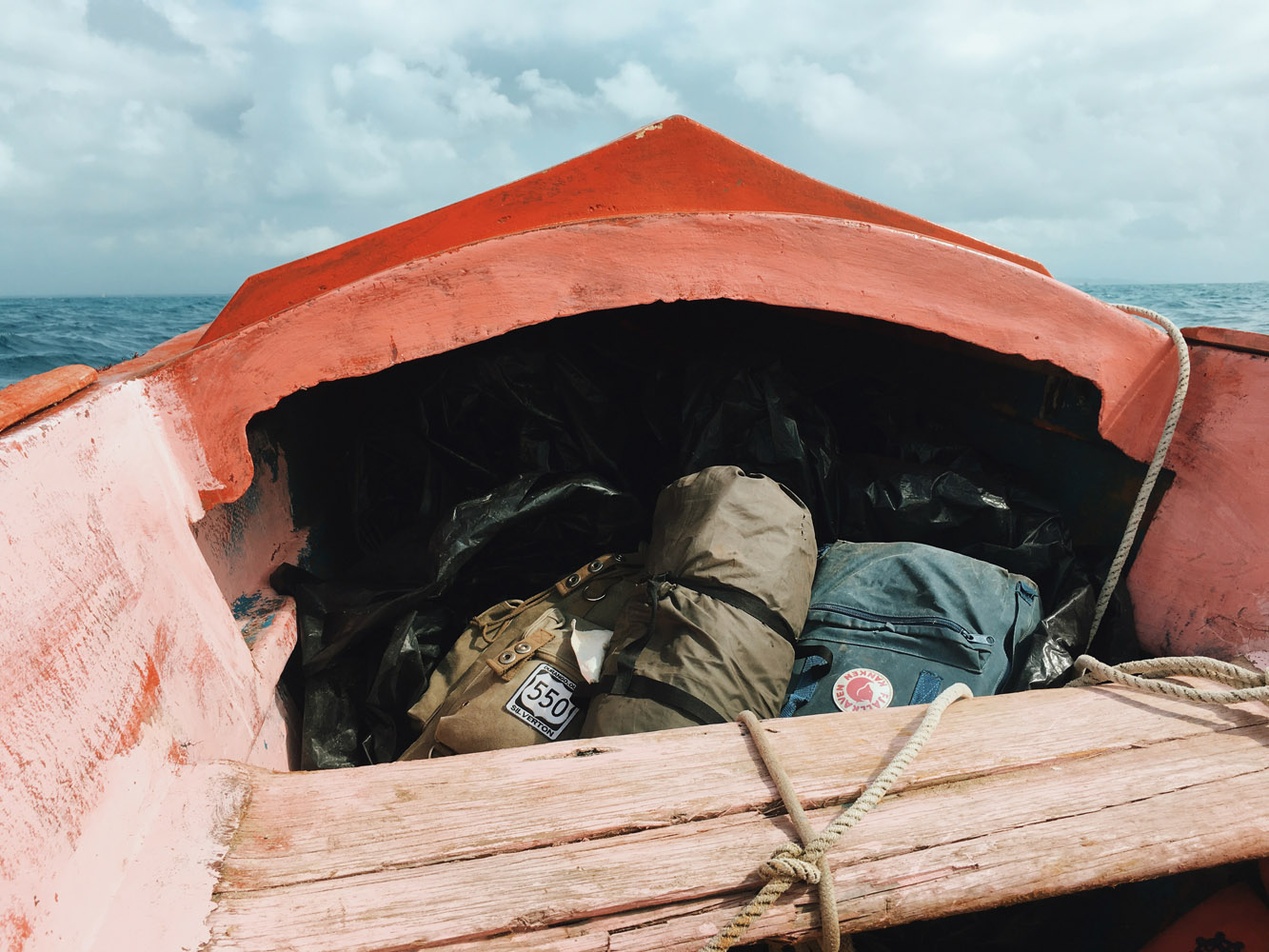 On the boat we met Alexandre, who offered to let us camp in his aunt’s yard. It was brimming with hibiscus, fruit trees, animals, and magic. He took us to a fantastic beach, where I swam and played soccer with some local boys, then we hiked uphill to tour the island from above. 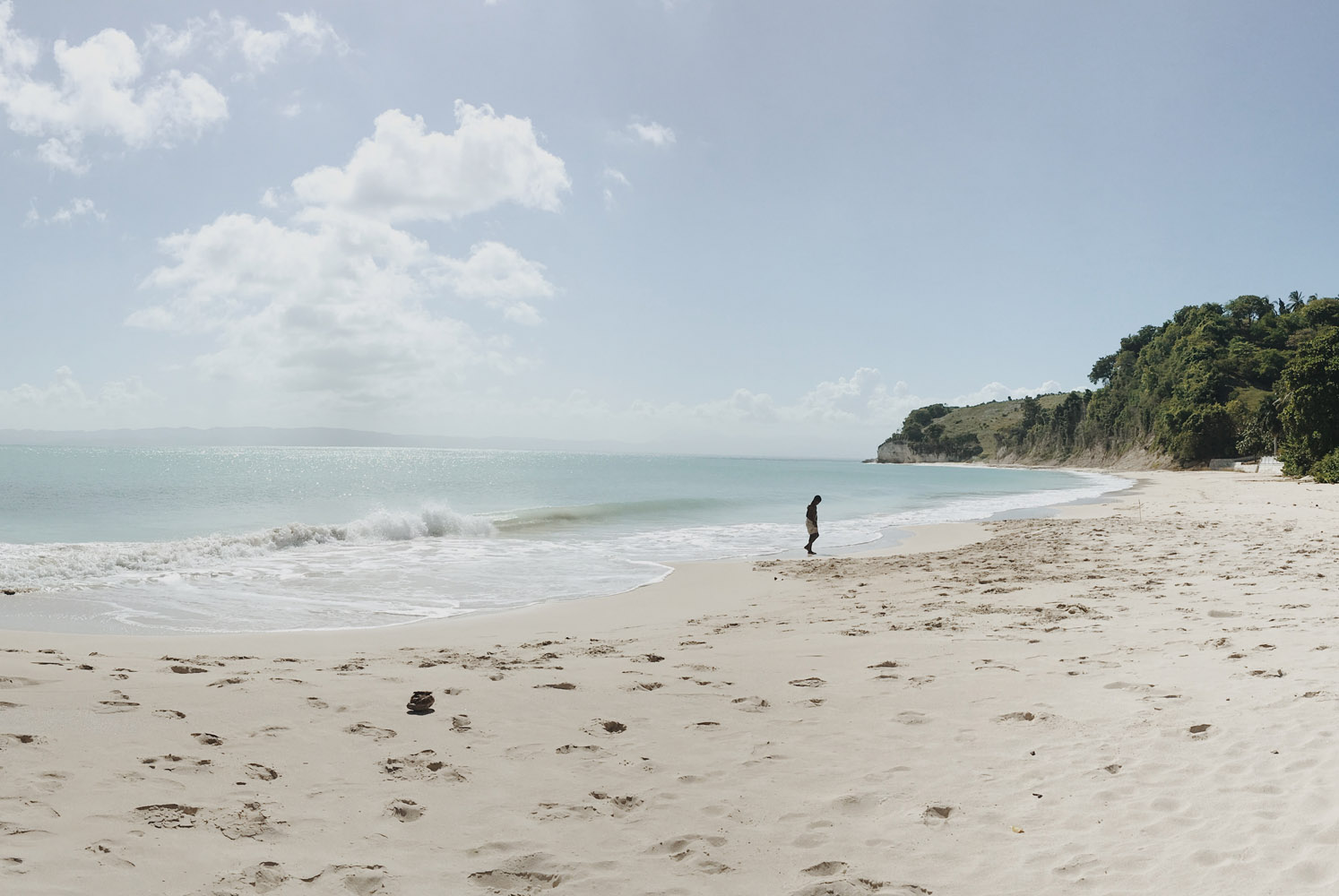 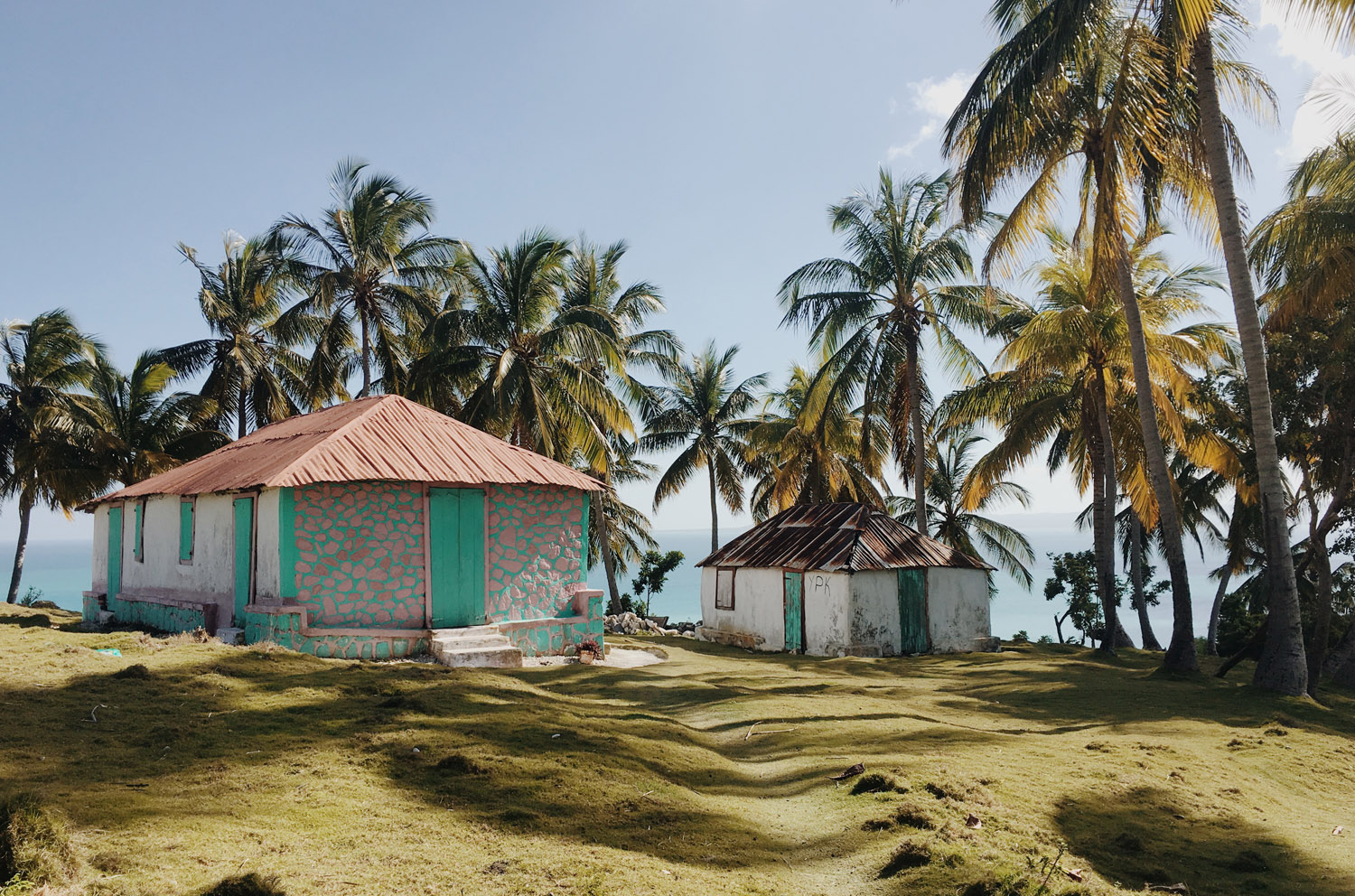 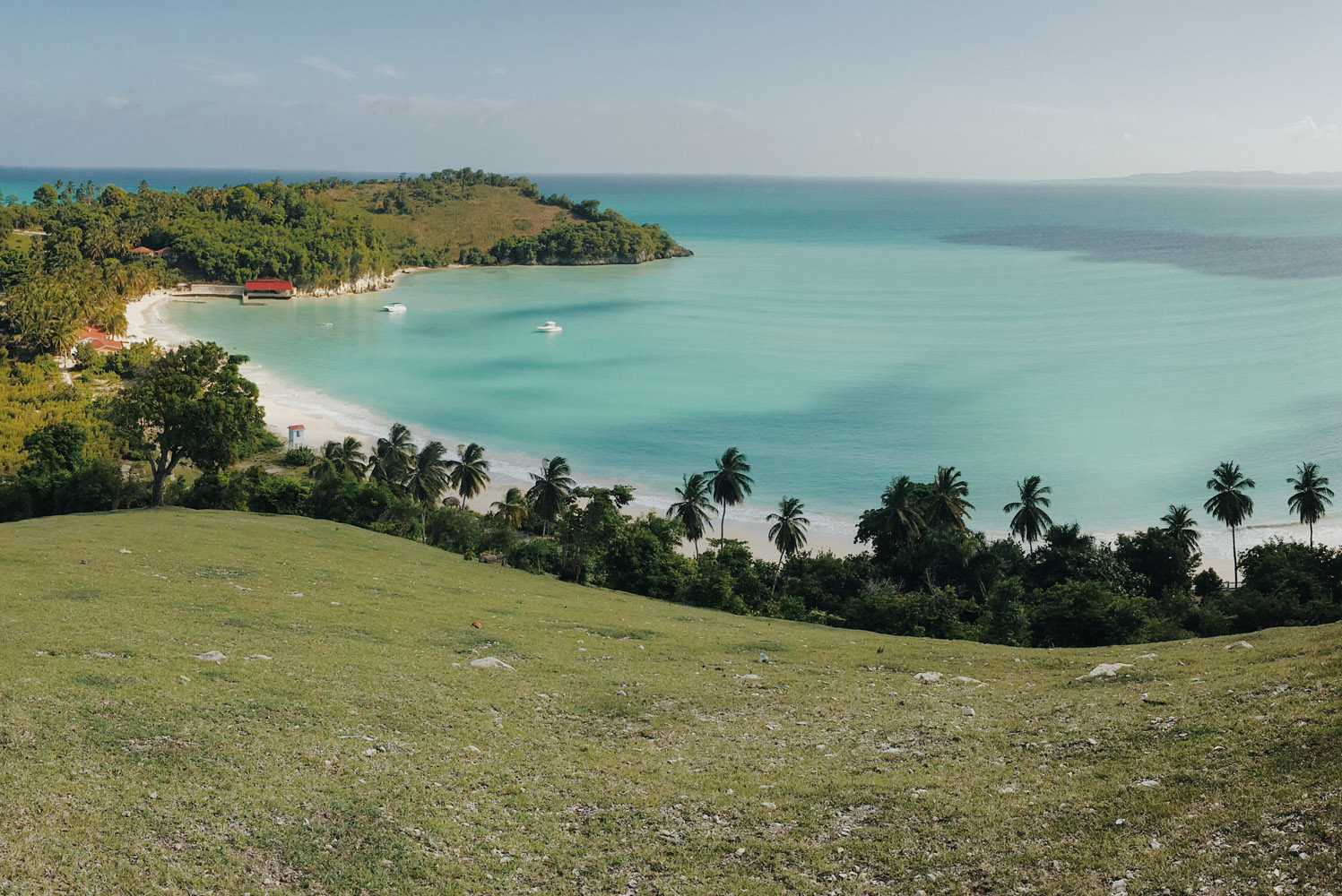 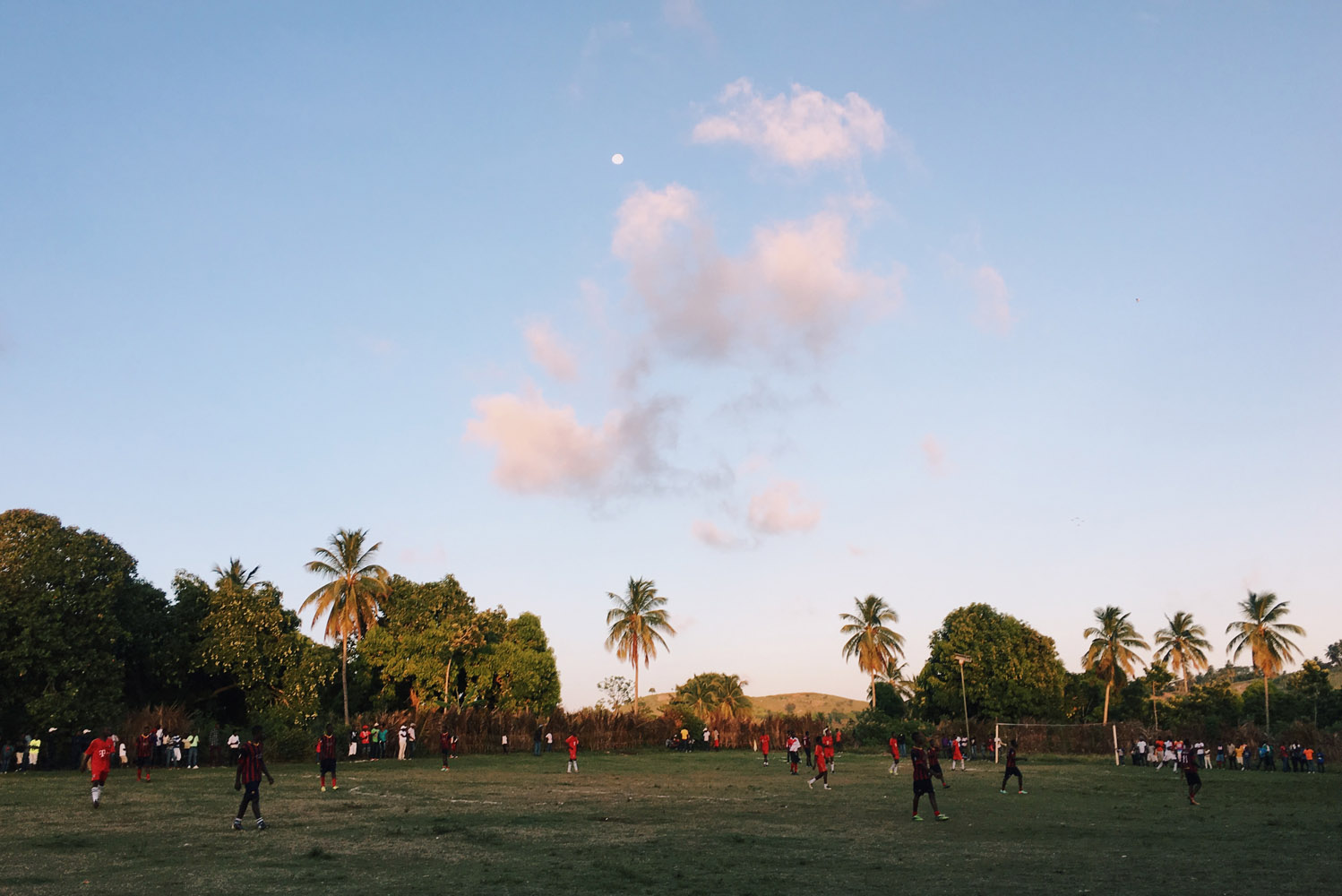 That evening we walked across the island to watch a soccer game. This final match was like a celebration: music, food, everyone dressed up in their best and there we were: a couple of sunbaked “blans” still trying to shed the grunge of days spent on the road. Afterwards we gawked at the sunset and everything living all the way to Alexandre’s cousin’s house for my favorite meal of the trip: heaps and heaps of langoustines. 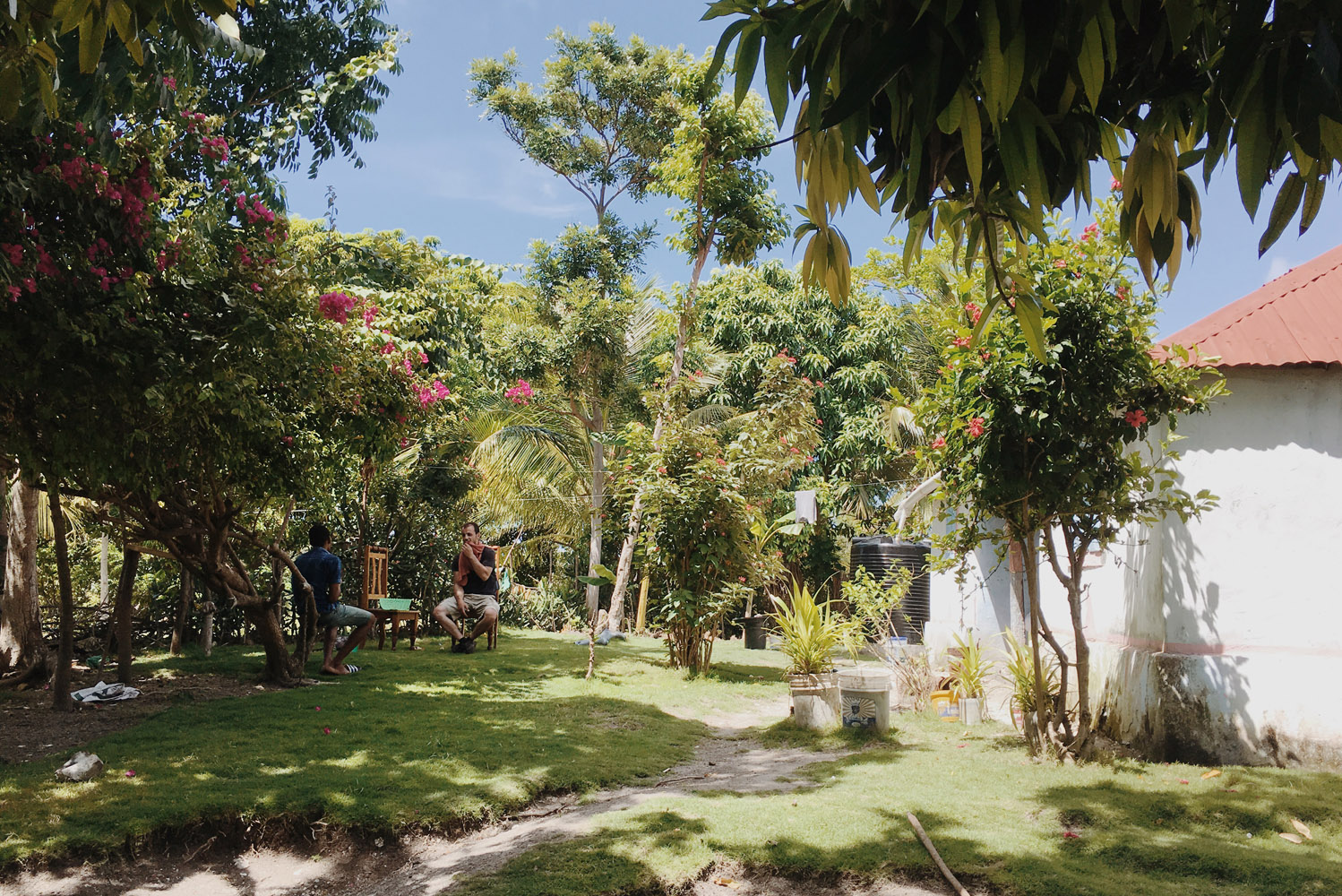 In the morning Alexandre brought us fresh bread, cashew fruit, and coffee. The night before, we had argued with his aunt to let us sleep outside instead of in her bed. Now, having had sheep and roosters crowing in my ear all night, I was perhaps understanding her resistance. But some rum down the hatch and we were awake and back on a boat to the mainland. 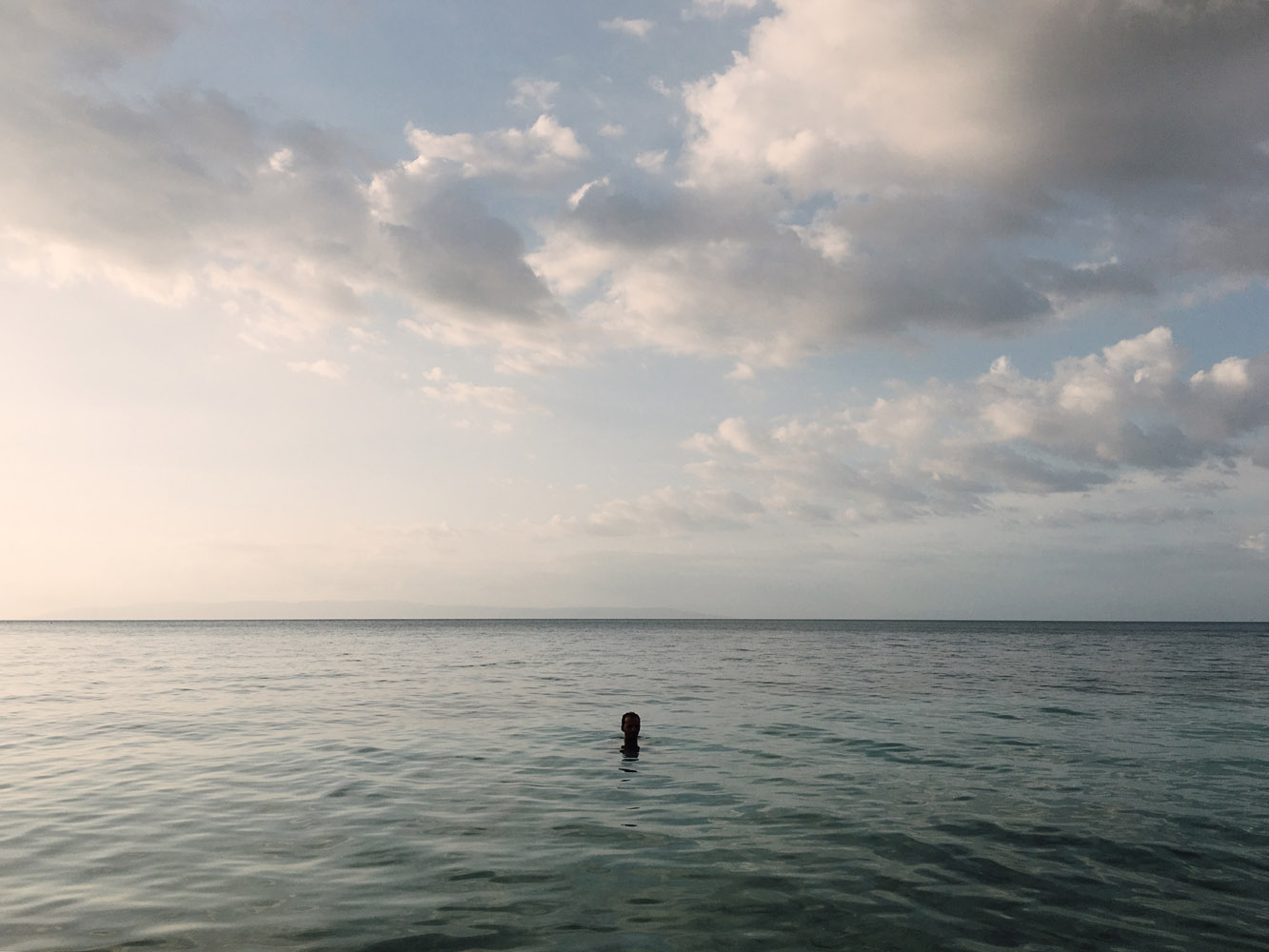 We wanted to treat ourselves to a shower so we booked it back to Grand-Goâve to a hotel we had seen earlier. The working a/c was a treat, even (and especially) when tarantula legs came flying out when it turned on. And though it wasn’t so much a shower as it was a bucket of rainwater, we tried our best to do as little as possible for the rest of the night. 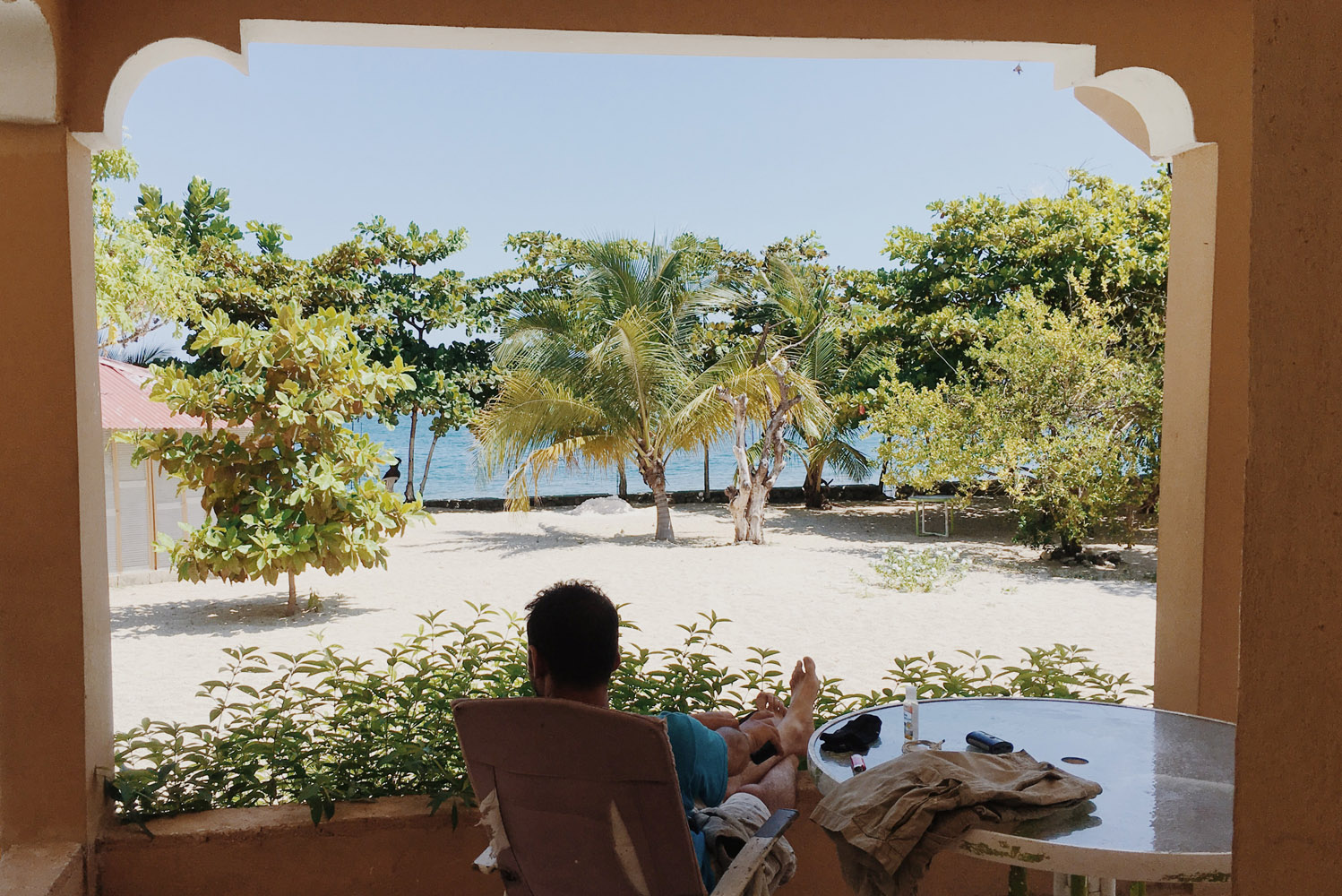 We spent the next morning sipping coffee under the shade of fruit trees. Locals would stop by to chat and show off photos of their children or anything else that brought a proud smile to their face. But the conversation, ragged as it was, kept coming back to the topic of Haiti’s overwhelming potential. If I ever decide to build a house on the beach, I know where to go. 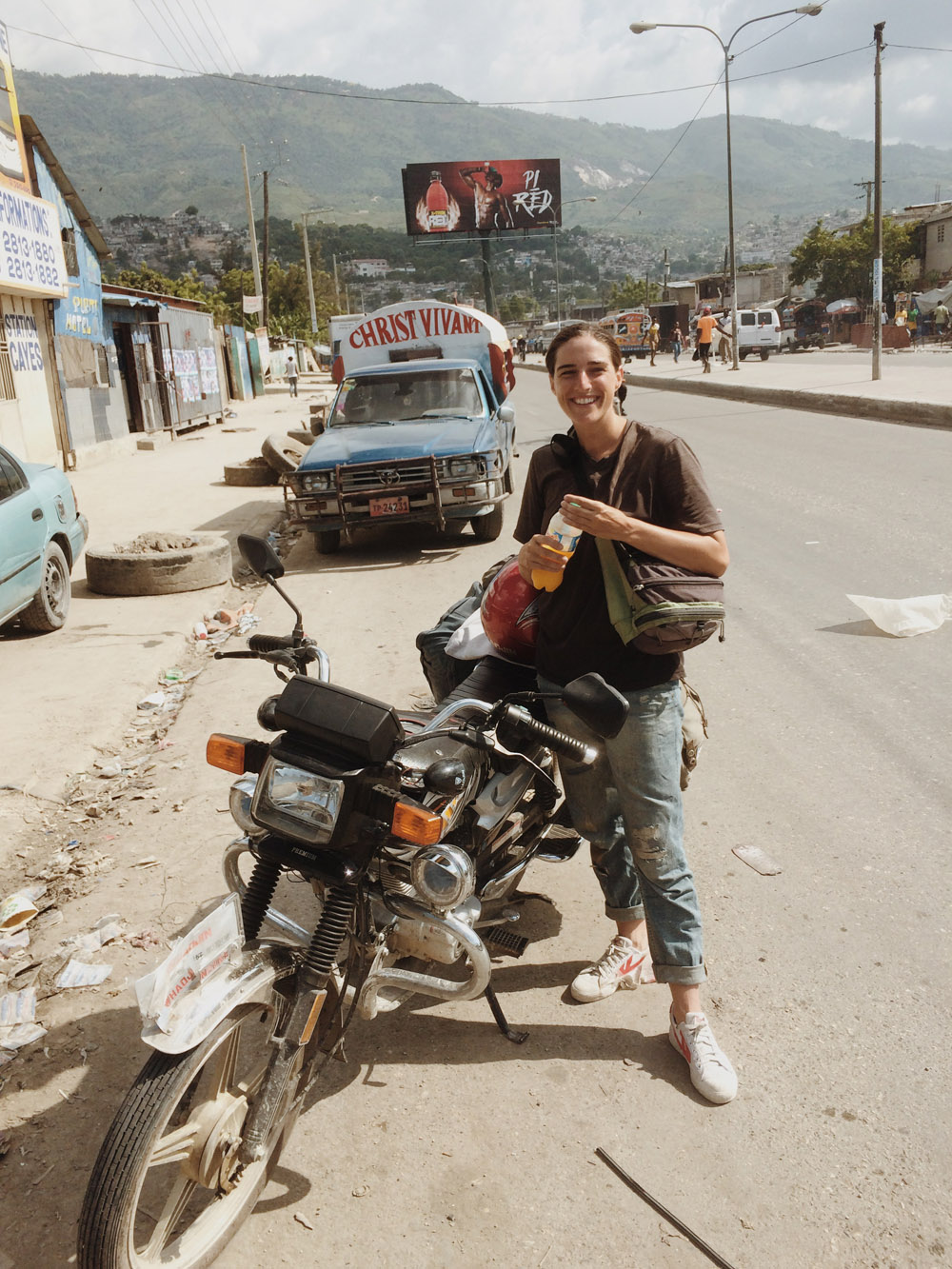 When we left for the final leg of the trip I was dreading our return into the abysmal traffic nightmare of Port-au-Prince. Luckily, although we did get hit by a car, the traffic was a breeze and we made it back to Fabien’s house in one piece and in time to celebrate his birthday. 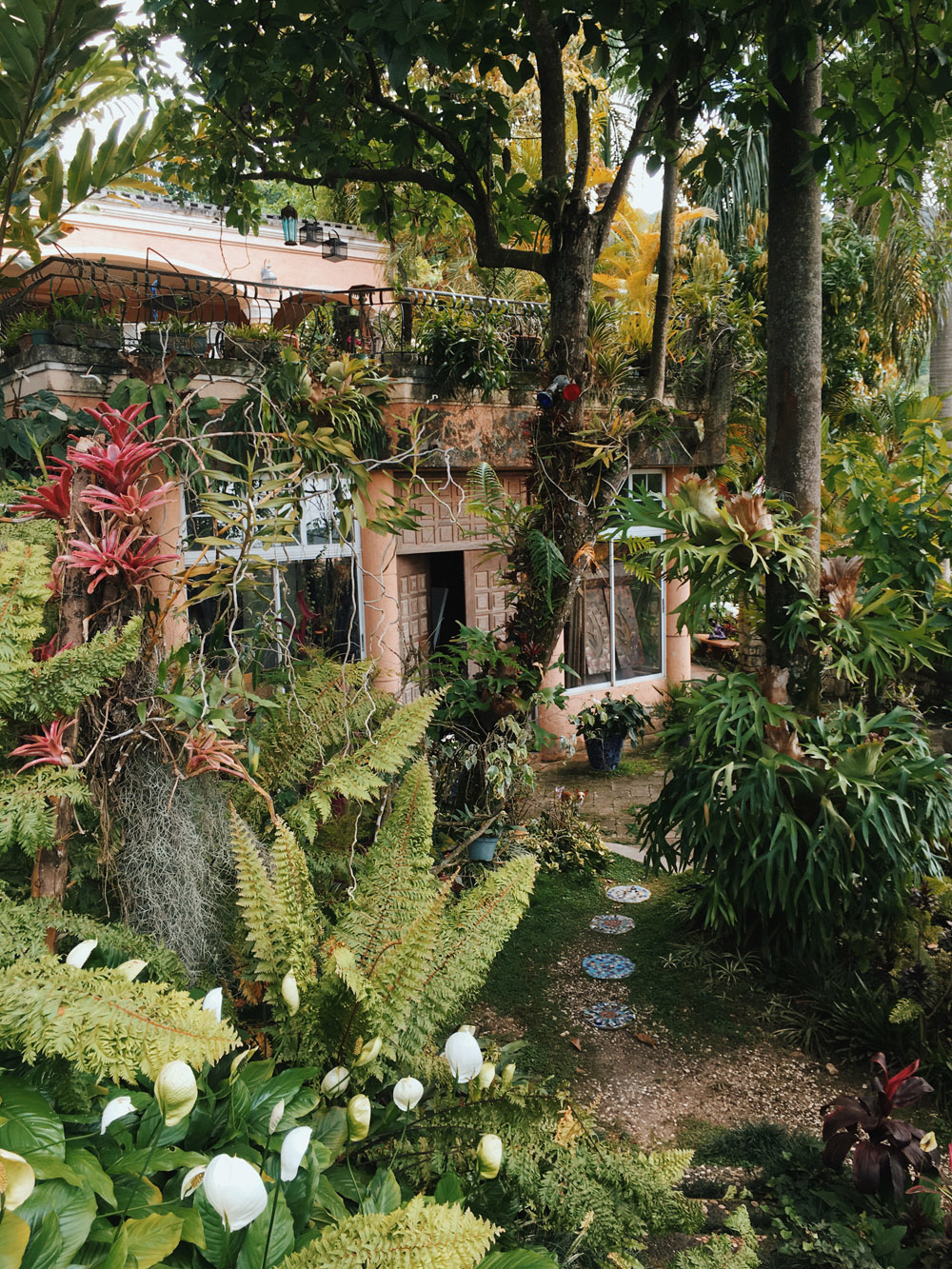 Saturday was our tourist day. We returned the motorcycle, bought gifts, ate whatever foods we hadn’t tried yet, toured the city with Fabien, and visited some of the places where he grew up. Fabien’s father is a renowned Haitian artist and married to a florist, so one can only imagine the enchantment that flows through his studio in the jungle. After another stimulating day we were so beat, I’m not even sure where the evening went. 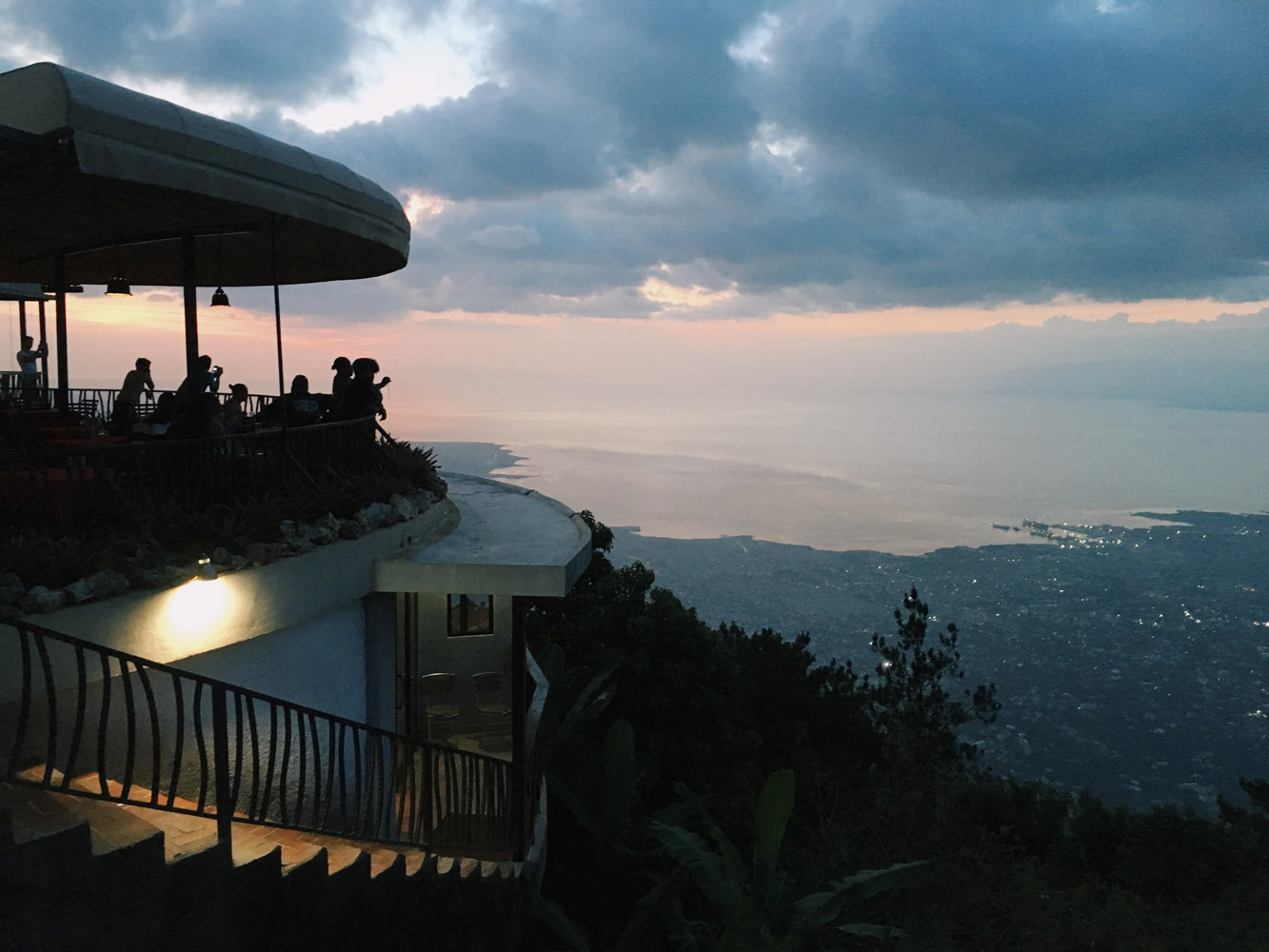 A restaurant overlooking all of Port-au-Prince and Carrefour

Back home, I’m still trying to process the experience. I continue to feel the softest spot in my heart for Jean and his family. I was so touched by the grace with which they gave and gave. The way Jean’s face crinkled up when we tried to offer money was confused, shy, and humble. “You are my friends,” he said in Creole, and shook his head.

Tagged
Photo + Video + Film Haiti
What did you think of this story?
Meh
Good
Awesome

US Aid Has Hurt Haiti More Than It's Helped

Why You Shouldn't Run Out To Volunteer for Disaster Relief

#FollowFriday: Essential Tweeps To Follow for Info About #Haiti

Notes From a Medical Volunteer in Haiti

Notes on a Picture I Took in Haiti

A Smile From Haiti