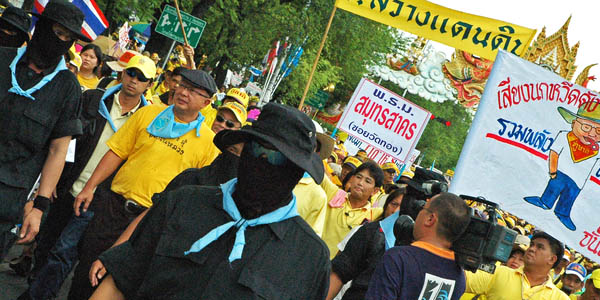 Political passions are raging in Bangkok and the future of the Thai government is uncertain. Here’s what you need to know.

A state of emergency was imposed in the capital after anti-government demonstrators fought with government supporters, leaving one dead and dozens injured.

Images of protesters pushing down gates, cowering among clouds of tear gas and clashing with opposing groups have prompted calls from concerned friends and family abroad who ask:

Here are 10 key points that explain the latest political struggle in Thailand:

The protesters largely represent the People’s Alliance for Democracy (PAD). They have been gathering near the seat of government for months prior to last week’s aggressive acts. Their aim is to topple the current government of Prime Minister Samak Sundaravej, a proxy for the former Prime Minister Thaksin Shinawatra, who was ousted in a non-violent coup in 2006.

The PAD is loosely comprised of many groups, representing Thais from all walks of life. Staunchly anti-Thaksin, they are fed up with corruption and abuse of power by the government.

Thaksin recently fled to England to escape corruption charges, and a huge wanted poster of the deposed premier and his wife graces the protest venue on Rajdamnoen Avenue. 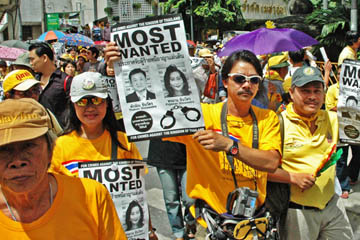 3. The PAD Does NOT Support Pure Democracy

The current government was elected last December, backed by the rural and urban poor, a majority of the Thai electorate. Thailand’s poor are overwhelmingly pro-Thaksin, won over by populist policies such as cheap healthcare.

This week, the Election Commission recommended that the Prime Minister’s party be dissolved due to an earlier conviction of one of its leaders for vote buying, a common practice in Thailand’s political culture.

Another grievance that fanned the flames of the PAD movement includes a Thai foreign minister’s endorsement of the long-disputed Preah Vihear temple as a Cambodian UNESCO World Heritage Site.

The decision was made without transparency, suggesting that a shady deal transpired. Detractors screamed over the alleged loss of national sovereignty, and the minister in question has since resigned.

5. Arrest Warrants Have Been Issued, But Not Served

Warrants for the nine PAD protest leaders have been issued for last week’s raid on a government television station and seizure of the Government House, but the leaders have not been arrested. They all face criminal charges punishable by death or life imprisonment.

6. The Prime Minister Is Unstable

Current Prime Minister Samak is a veteran of Thai politics, and is widely known for his gruff manner and cantankerous nature. His mental health has been publicly questioned on several occasions. In 1976, Samak ordered a massacre of student demonstrators in Bangkok but proclaimed in a recent CNN interview that only one protester died.

7. The Prime Minister May Resign

Rumors that Samak would resign were flying around Bangkok recently (one English-language daily ran the headline “Samak on the Brink of Exit”) but instead the Prime Minister announced, “Don’t even think I am going to quit. The country needs a leader, and the world is watching us.”

Samak has also said he will not dissolve Parliament. It’s confusing. His agenda is not entirely clear.

8. There Probably Won’t Be A Coup

It’s unlikely a coup will take place, despite the declared state of emergency. This decree bans gatherings of more than five people or any group that might cause disorder, and gives the army and police chiefs complete control of the city.

Many believe this declaration is unwarranted; violence has been relatively minimal and contained to a small section of the city.

Samak apparently attempted to use the state of emergency to justify the forceful expulsion of protesters from the government compound. However, the Army chief stressed that he would avoid the use of violence at all cost.

9. The Unions Are Mobilizing

Left-wing unions have joined with demonstrators to oppose the government. Workers in the transport sector, including rail, aviation, and shipping, have stopped work at times, causing monetary losses, disruption of services, and inconvenience to passengers and businesses.

Utilities workers have also threatened to cut off power and water to government offices, but this has not happened.

10. The People Will Decide

The latest development is that a referendum, a direct vote by the people, will be held with three questions:

Should the government continue in office, resign, or dissolve the House for a snap election? Should the PAD continue or end its protests? Should the PAD’s proposal for new politics to revamp the electoral system be accepted?

At this point, no one is certain what this means, how long it will take, or how things will end.