I used to keep bees in high school — it was one of the more rewarding, relaxing activities I’ve ever done. I had two different hives over the course of two years: one of Italian honeybees (the most common type of honeybee in America), and one of Russian honeybees, which are genetically more resistant to cold and pests than their Italian counterparts. I still watch the video that got me into beekeeping from time to time — the first video featured below — because it constantly fills me with wonder at how much about the world I don’t know, about how there are crazy things I’ve never heard of that evolved in faraway places with fascinating traits and survival mechanisms.

I was re-watching this video on Japanese giant hornets again the other day, dreaming of the day when I will keep my own honeybees in a rooftop garden somewhere, and that led me to do a little research into what other fascinating and dangerous insects are out there.

Note: Two of the critters below are spiders, and one is a worm, neither of which are technically insects — but they’re still crazy, and fearsome. 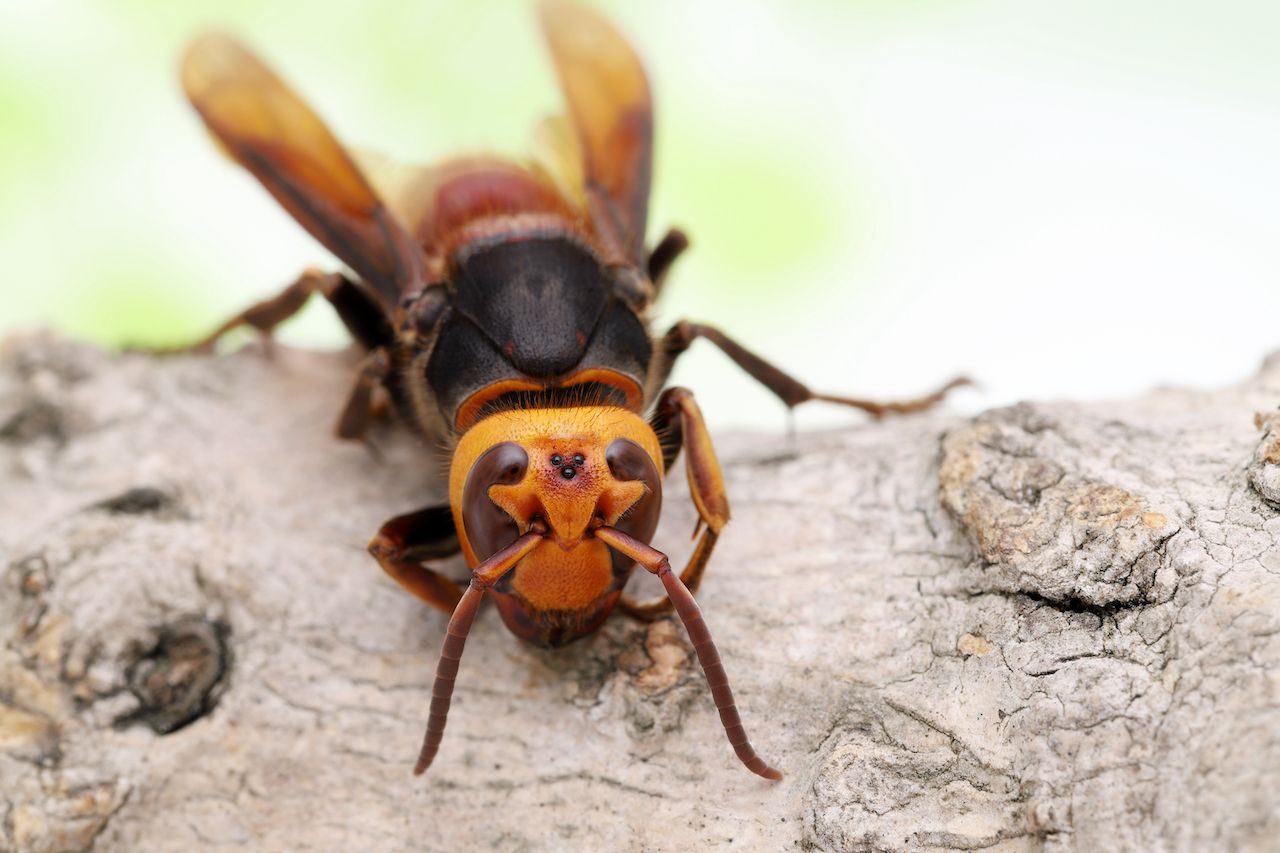 This is the critter that initially got me started beekeeping. I remember very clearly sitting at home watching a documentary on National Geographic and seeing an entire hive of honeybees decimated in a few moments. As I watched the Godzilla-like bee carnage, I was instantly hooked on bees and had my first hive set up in my backyard two weeks later, thanks to Brushy Mountain Bee Farm — an outstanding resource for beekeepers in or around North Carolina.

The Japanese giant hornet can grow up to 4cm in length (multiple times the size of any honeybee), and injects venom into its victims with a quarter-inch stinger. That’s about half the size of your pinky fingernail.

European honeybees like the ones I kept in high school have no defense against these hornets, which prey on the larvae and honey inside a honeybee hive. As you can see from the video below, these hornets are efficient insect assassins, and can destroy an entire hive in the space of a few hours. Usually, a honeybee hive will contain 30,000 – 60,000 individual bees, depending on the season.

Interestingly, Japanese honeybees have evolved a defense mechanism to combat the giant hornet. To keep their hive safe, the bees form a swarm of around 500, encircling and capturing a hornet in a giant bee-ball. They wiggle and beat their wings together to create a mini convection oven, concentrating their body heat around the hornet, effectively roasting it to death. 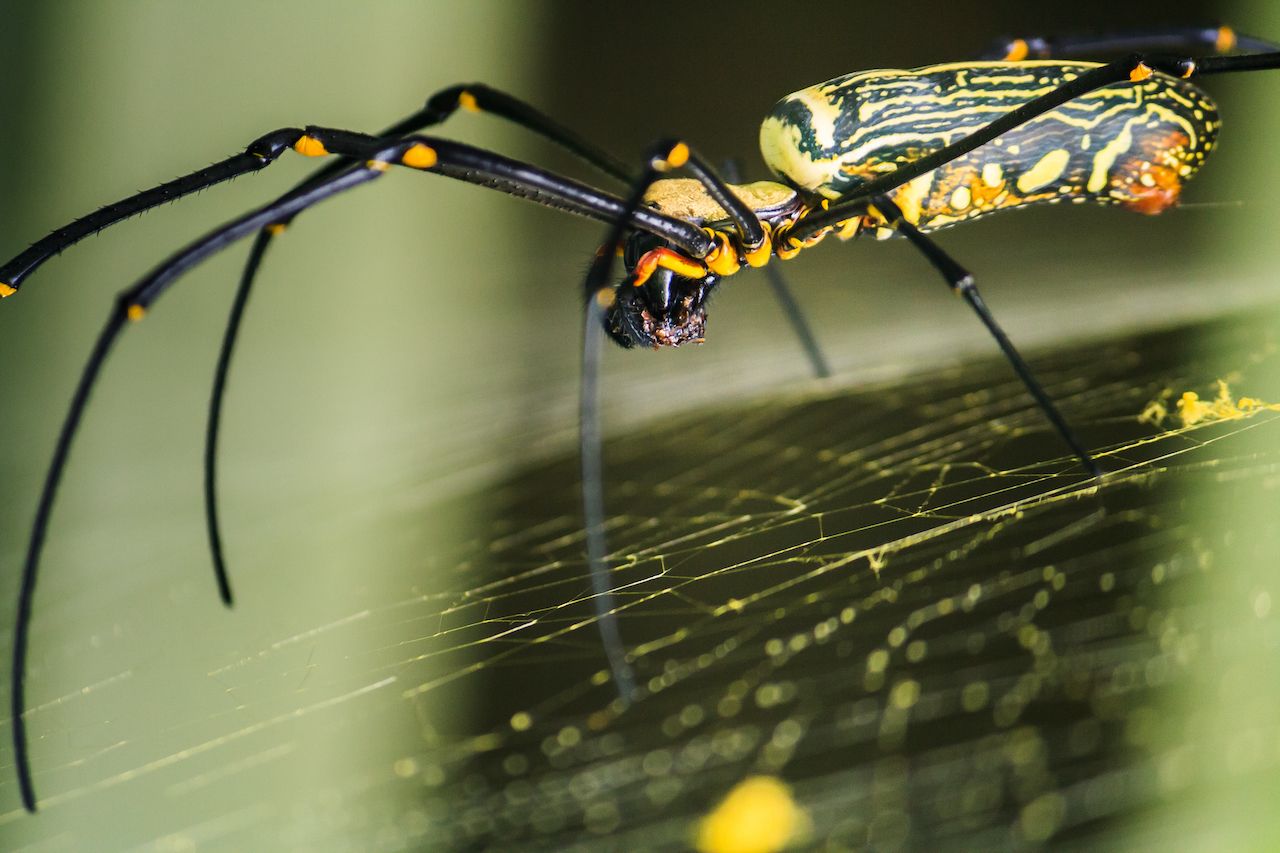 Australia is famous for all sorts of dangerous creatures, including a host of seriously deadly snakes, and spiders that hide under your toilet seat. Australia is also home to the golden orb-weaver spider, one of the largest spiders on Earth. There are documented cases of these spiders growing large enough to consume medium-sized birds, and they regularly trap snakes and lizards in their massive webs.

The golden orb-weaver spider, also sometimes known as a banana spider, is the largest known species of fossilized spider around, with some fossils dating back to the Jurassic period over 164 million years ago. Usually they won’t bite a human. If they do, the bites only cause mild pain, but the sheer freaky size of the spider would be enough to give me a heart attack if I saw one crawling up my leg.

I reiterate: There are actual documented cases of this spider eating a bird. Check it out. 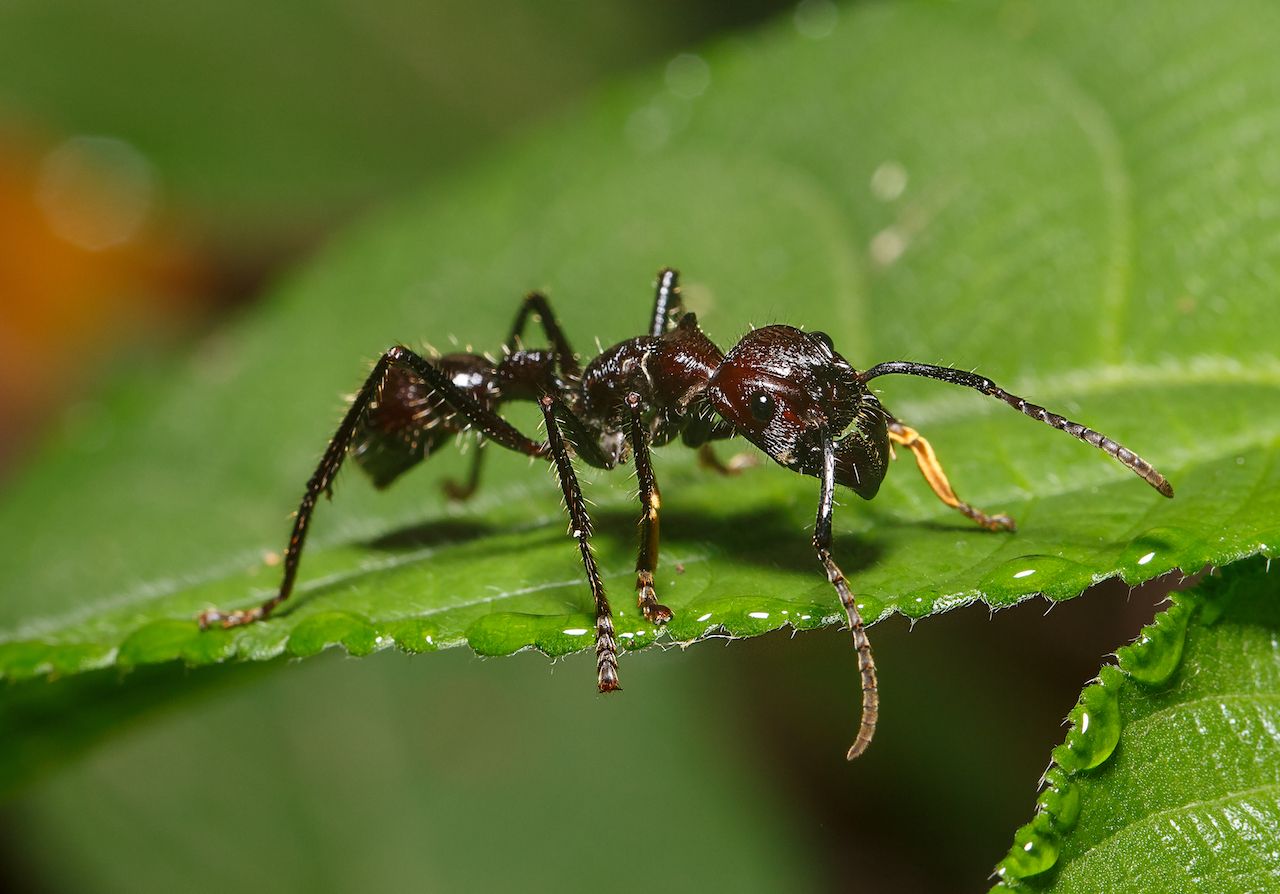 The bullet ant holds the title of having the most painful insect sting in the world, similar to being shot by a gun.

One tribal culture in Brazil has developed a rite-of-passage-style ritual involving the bullet ant, wherein young boys must put their hands into gloves covered with angry bullet ants and allow themselves to be repeatedly stung for 10 minutes to demonstrate their manliness. Young men wishing to become full warriors in the tribe must undergo this painful insect ritual 20 times in order to be considered truly and fully members of the tribe. 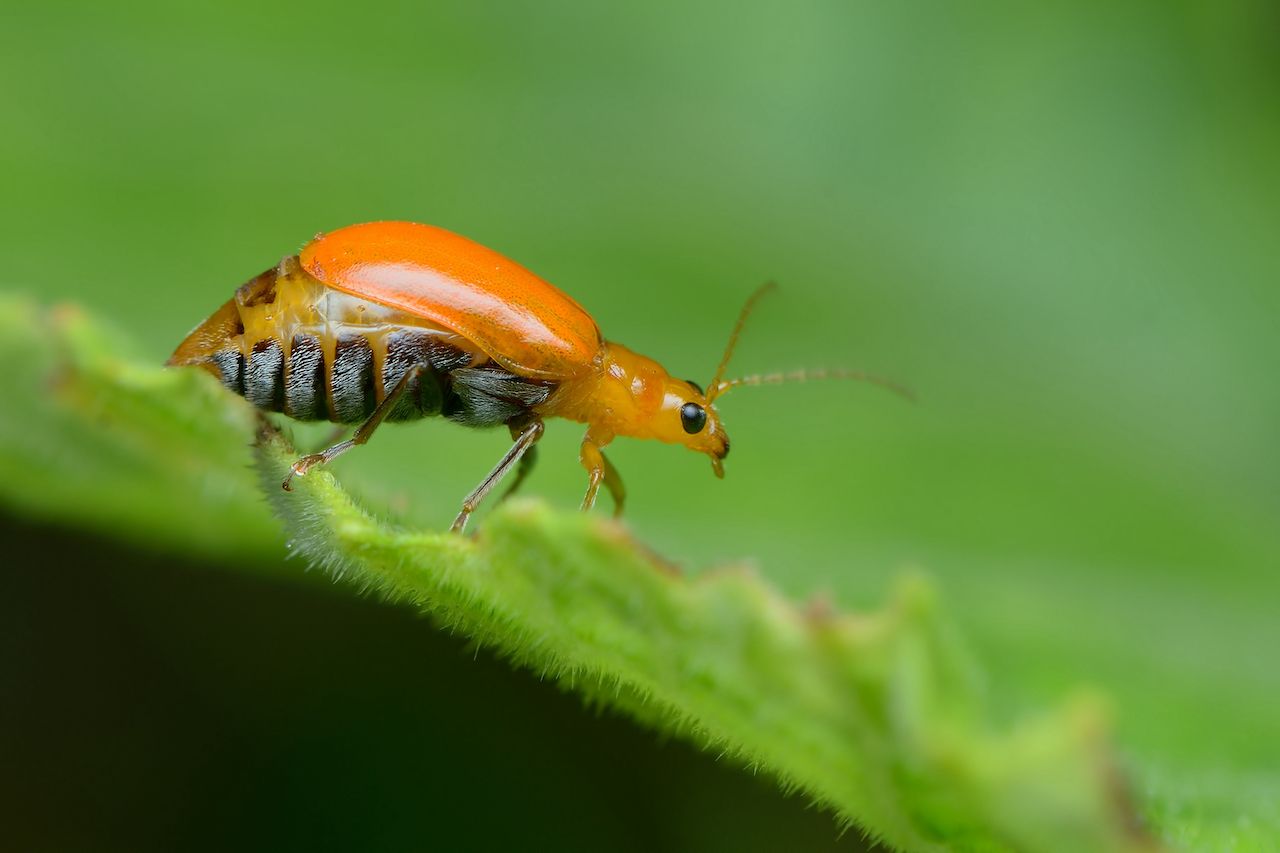 The bombardier beetle has one of the most unique chemical defense mechanisms of any insect on Earth: Its rear abdomen holds two separate glands that store chemicals. When these chemicals react, they produce an exothermic chemical reaction (which releases significant amounts of heat). The chemicals mix together and shoot out of the beetle’s abdomen in a noxious gassy liquid form at the boiling temperature of water — 100 degrees Celsius.

The bombardier beetle uses this boiling hot gas to fend off predators. The beetle can aim its abdomen in any direction, giving it a full 360-degree defensive system to fend off any ants, insect predators, or frogs and other vertebrates that might want to try and eat one for a snack.

The Gordian worm is a type of parasite that latches onto crickets like a wicked, deadly cricket tapeworm. The worm, somewhat like the zombie fly we’ll get to know below, inserts itself into a cricket host and infects it.

Horsehair worms lay their eggs in water sources frequented by crickets. As crickets drink the water, they ingest the worm eggs, which turn into larvae inside the cricket’s body. These larvae grow slowly over time and infect the cricket host, sending tendrils up into the cricket’s brain to take over its motor control and causing the poor cricket to seek out water and drown itself.

When the worm reaches water, it will crawl out of the host and swim back into the water to start the cycle all over again, laying eggs to infect the next poor thirsty cricket that comes along. If you live in North America and have any beloved pet crickets, you will want to watch out for these things. 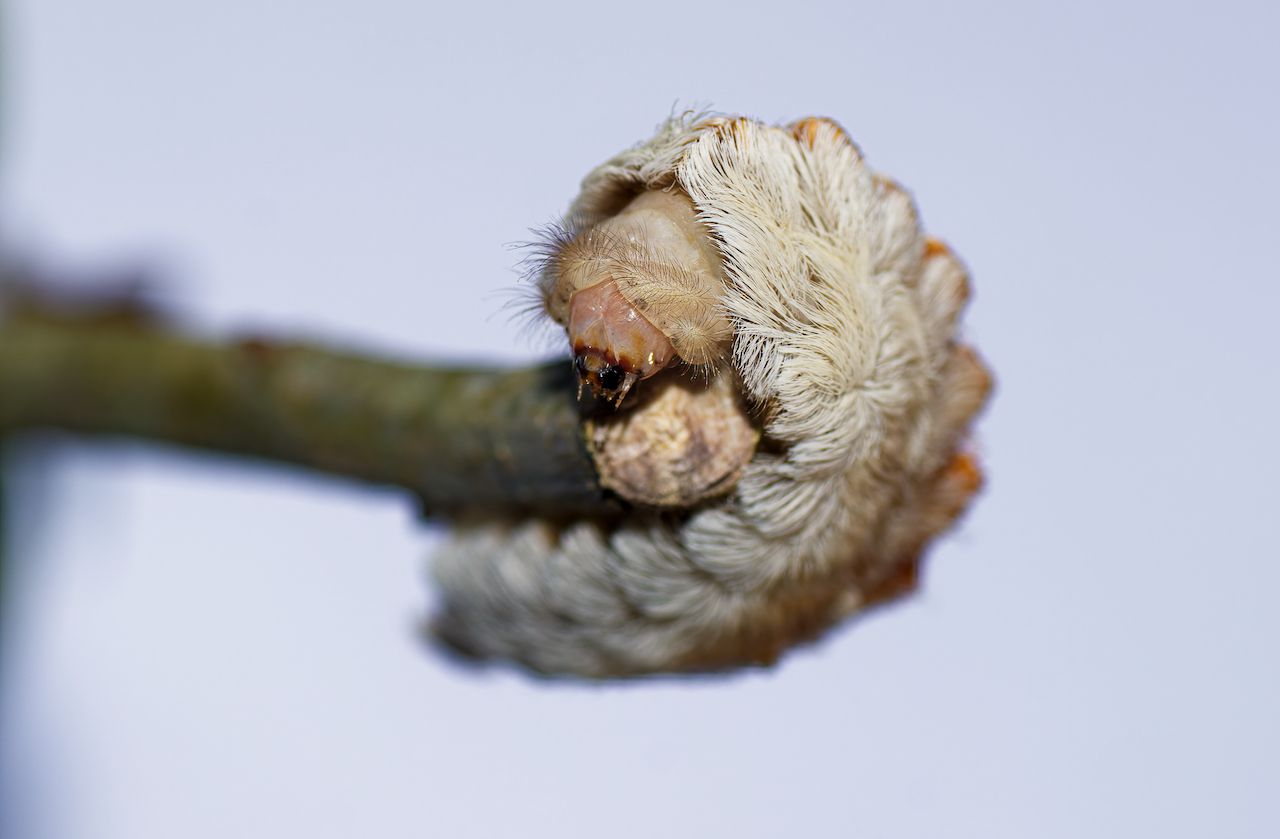 The puss caterpillar looks like a giant stuffed toy, a big fuzzy Furby you’d want to put right next to your teddy bear or Angry Bird plushie toy. It’s one of the cutest dangerous insects around, but watch out — if you put it up to your cheek to cuddle it, your face will break out in waves of extreme radiating pain.

Also known as the wooly slug, the puss caterpillar is the single most poisonous caterpillar in the United States. Some of the symptoms of a puss caterpillar sting include fever, nausea and vomiting, muscle cramps, swollen glands, shock, itching, and immediate pain.

WebMD advises that if you come into contact with a puss caterpillar, the proper way to proceed is to remove the broken spines from your body with cellophane, and contact your doctor. In other words — no matter how cute they are, never snuggle up with one against your cheek. 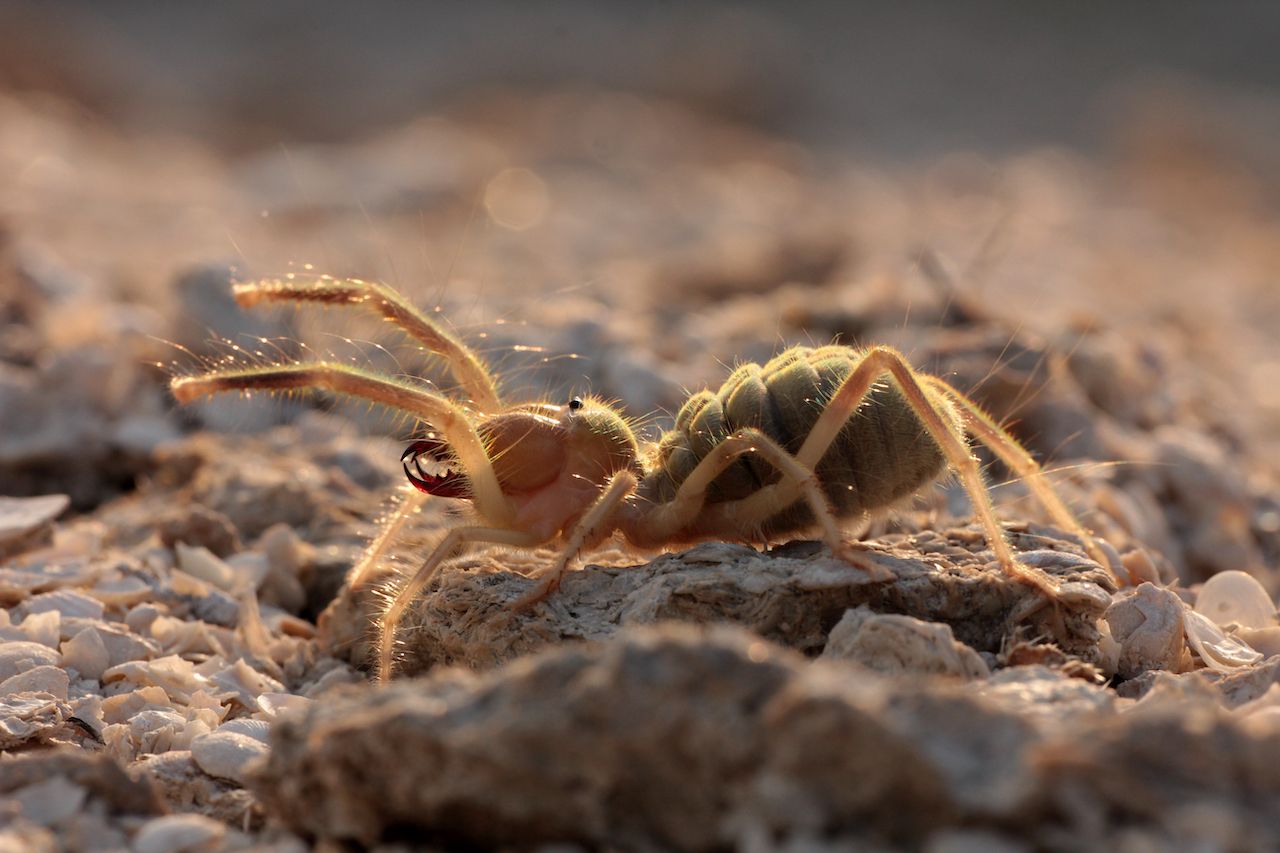 Home environment: Deserts in Egypt, Iraq, and other parts of the Middle East and Western Asia

Okay, so once again spiders are not insects, and as a full disclaimer, this monster spider (also known as a wind scorpion) is not venomous. The camel spider earns a place in my list of most fearsome insects primarily due to the photo below of the massive, monster, humungous spider hanging off a military person in Iraq that’s almost as long as their leg.

Although not venomous camel spiders do have painful bites, and they can take a scorpion right out of commission if the scorpion is stupid enough to come knocking.

The human botfly is probably the most disturbing insect on my list of must-see fearsome insects from around the world.

This fly lays eggs on animals that land on humans — animals like mosquitoes, ticks, and normal flies. When the animal carrying the fly’s larvae lands on a human host, the human’s body heat helps to hatch the tiny eggs into tiny larvae. If the bite wound from the mosquito or tick is large enough, these larvae will directly enter the human’s body through the bite wound. If it’s not, they’ll eat their way down into whatever piece of human flesh they land on, burrowing in, chowing their way into your body.

After the human botfly larvae are inside a human body, they develop and grow, feeding on you for around eight full weeks. Then, the larvae begin to burrow their way back out of your body and skin to drop into the real world as they pupate (change from larvae into flies).

Usually, doctors are completely at a loss for what is causing the symptoms in whoever has been infected by the botfly. Oftentimes, doctors are unable to truly diagnose the issue at hand and remove the maggots from their human host for multiple weeks, by which point the botfly has already fed on the insides of its host for longer than I care to think about.

There are videos available on YouTube that I’m choosing not to insert or link to here, as they’re not for the faint of heart (and mostly not for the strong of heart either). If you’re curious, check it out.

The zombie fly has been selected as one potential cause behind the unprecedented disease affecting massive portions of America’s wild and commercial honeybee population: Colony Collapse Disorder. The fly is somewhat similar to the horsehair worm (see #5 above) in that it inserts itself as a parasite into a parent host — in this case, the honeybee.

The zombie fly injects itself into the abdomen or thorax of the honeybee and infects it, clouding the bee’s natural judgement and motor control skills, causing it to fly away from its hive. As the bees depart in larger and larger numbers, the hive weakens, dwindles, and tragically collapses, unable to support itself any longer.

Colony Collapse Disorder is one of the most important, yet least recognized problems of our time. More than 1/3 of the average diet in America is made up of foods directly pollinated by honeybees, and some beekeepers have seen as much as 50%+ of their bee operation vanish due to Colony Collapse Disorder. If the zombie fly is really at work here, it’s threatening far more than just the individual bees and hives it impacts — it’s threatening large portions of the world food supply, and hence earns a spot on my list of most fearsome insects. 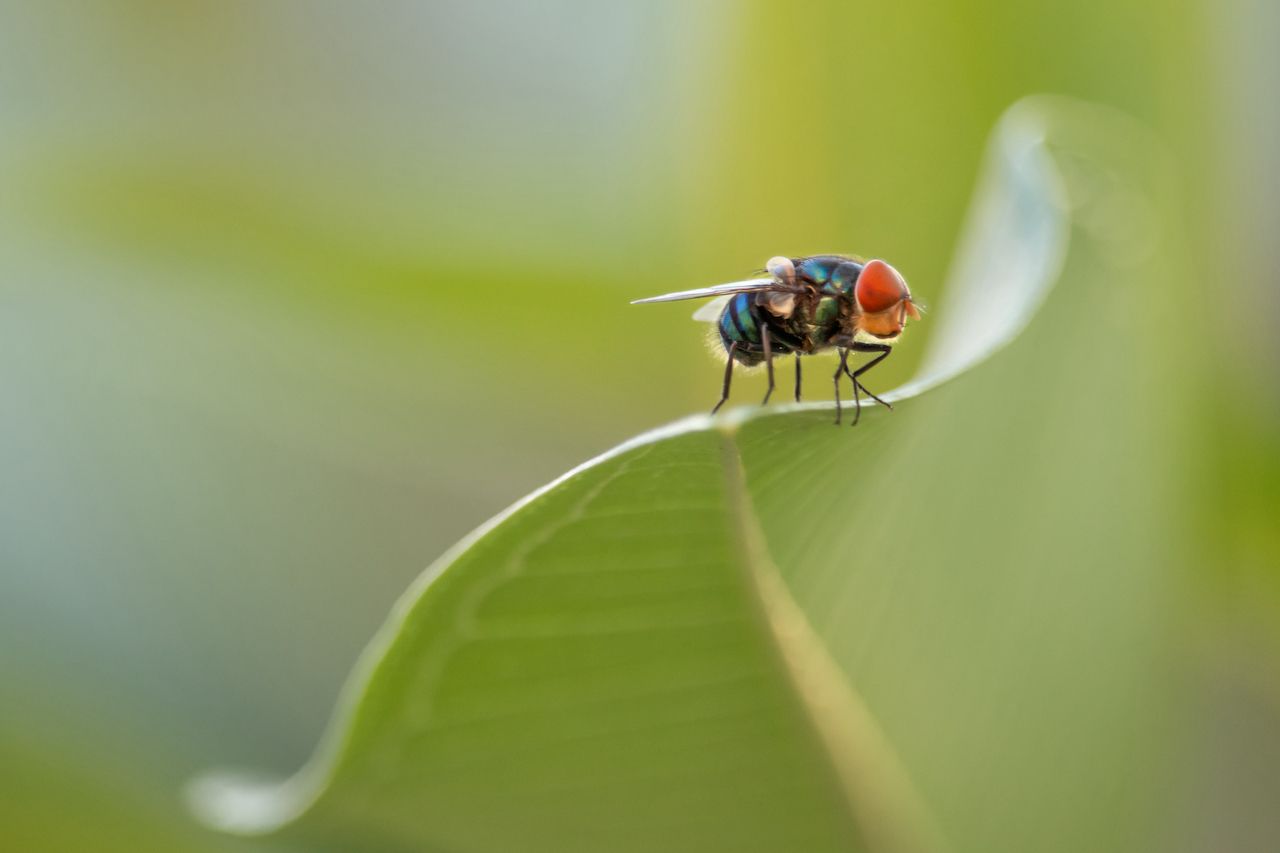 The New World screw worm fly feeds off warm-blooded animals, kind of like the human botfly. These flies lay their eggs in open wounds on animals (yes, sometimes including humans), and the larvae that develop within the open wound “screw” deeper in if they’re disturbed in any way as they’re feeding. New World screw worm flies are capable of causing severe tissue damage to their host, and in some cases even death.

The Australian Department of Agriculture, Fisheries, and Forestry reports that screw worm flies could cost Australia as much as $500 million / year if they entered the continent, wreaking havoc on local ecosystems, production, livestock, and humans. In other words — these flies are seriously bad news.

To get a better sense of why, check out this helpful documentary clip from Australia on the screw worm fly.