COMPARING THE AUTO INDUSTRY to the computer industry is like comparing two different generations of technology. We’ve got super-fast smartphones and iPods streaming Rhapsody in our pockets, but satellite radio and clunky GPS devices attached to our dashboards.

Automakers are aware they’re a little behind the times, and by 2020, many are promising dashboard and safety systems as sophisticated as iPads — maybe even more so.

Obvious, but vital; most of the technologies on this list would be fairly useless if the car wasn’t a rolling hotspot. Several auto manufacturers are already working on developing wifi for cars. In fact, connected cars are the third fastest-growing technological device, following smartphones and tablets.

Ford has introduced this in some models with their Sync system, and Toyota is working with Intel on developing one of their own. Ideally, these systems will also have the ability to connect to your home network, allowing you to transfer information from your computer or laptop directly to your car. 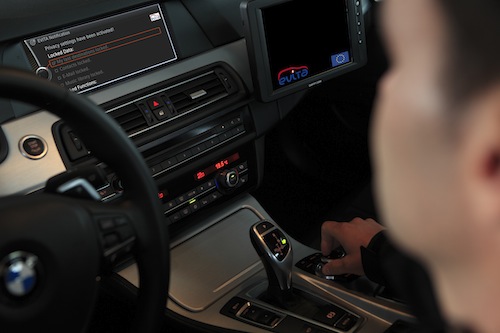 I take it back — this is the most vital technological advancement in automobiles. If texting increases accident rates, what will happen when drivers can tweet, update their Facebook page, and watch videos on YouTube?

Voice recognition is still making its way from novelty to necessary, even in the smartphone world, as it’s proven a difficult technology to master. But there’s arguably a more urgent need to succeed in this field for car manufacturers than in any other industry; already, the US Department of Transportation is calling to require voice input control of smartphones, mp3 players, tablets, and any other devices drivers may use in the car.

Unfortunately, this technology may also prove to be the most expensive for auto makers. As of now, Apple’s Siri is the only voice recognition system that’s been highly praised — and even Siri is a long, long way from whatever Kirk had on the Enterprise.

You’re on the road and it’s time to find a hotel. Today, you might fumble with your phone, use an app to search for something nearby, and get directions. Or maybe you’d use that GPS device suction-cupped to your window.

But by 2020, your dashboard will likely resemble a giant iPad. Ideally, that means your car’s system can be linked to whatever cloud service your smartphones and tablets use, allowing you to keep up with texts, calls, emails, social network updates, and apps from behind the wheel. So when you’re ready to check in, you can just open apps like HRS Hotel Portal with a vocal command and talk your car through a map-based search, browse rates and room types, view photos and videos (while you’re parked, hopefully), and book a room.

Toyota calls it HMI (Human-Machine Interface), a system they’re already working on in partnership with Intel and Microsoft. These digital dashboards may turn your USB mobile broadband modem or smartphone into a wireless router, like Ford’s Sync system. Or they could connect with Bluetooth devices like Kia’s Uvo, so making calls and finding music are all voice-controlled. 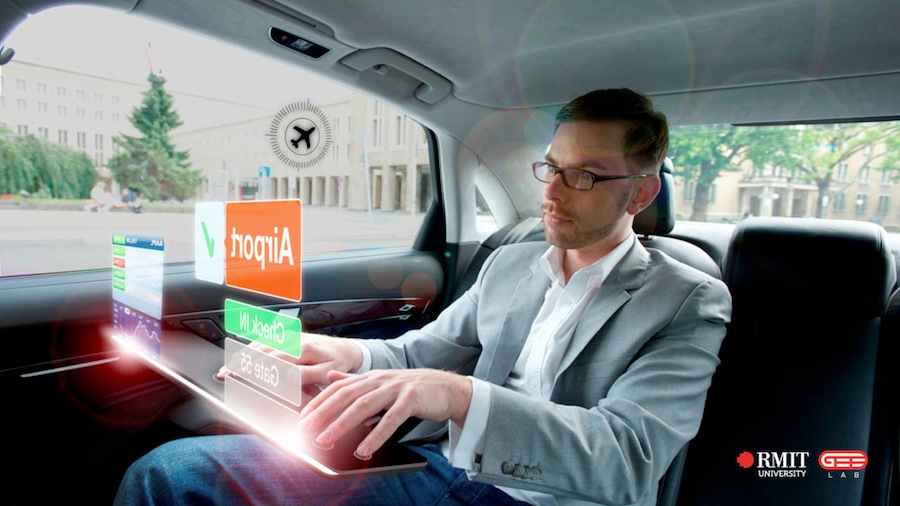 According to Business Review Europe, this system will combine holographic displays with motion sensors to create applications for folks in the backseat that’ll be similar to Microsoft Kinect and Nintendo Wii. While games are the goal, the resulting holographic technology could also be used to display dashboard and control info, as well as GPS.

Even now, some cars are equipped with technology only a step or two away from holographics. S-class and CL-class Mercedes feature SplitView screens, which are pixelated in a way that projects two completely different images — one for the driver and one for the passenger. However, the system is not yet legal in all states. 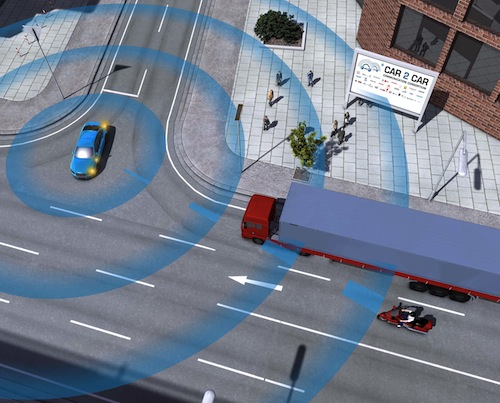 Unlike driver-to-driver communication, this (probably) won’t involve middle fingers. Once cars are connected thanks to technologies such as Intel’s M2M (Machine-to-Machine), they’ll be able to share data with other cars on the road and warn drivers of accidents, as well as figure out alternate routes based on real-time information — which in turn will help cut down on traffic and increase safety on the road.

As an example, the Car2Car Communication Consortium points out a fairly commonplace scenario: A motorcycle is riding alongside or just behind a larger vehicle on a main road, while you wait at an upcoming intersection to make a right turn onto that road. The larger vehicle turns off the road, and because you still can’t see the motorcycle, you pull out — right in its path. With car-to-car technology, both you and the motorcyclist would receive a warning early on, which would likely help avoid a collision.

There’s some overlap between car-to-car and car-to-X technology. BMW prefers car-to-X, as they’re looking into designing a system that allows cars to communicate with other systems outside of those in vehicles.

One of these research projects is known as PROTON-PLATA (programmable telematics onboard radio), conducted by DEUFRAKO, a Franco-German cooperation in traffic research. The project is addressing the issues posed by a wide range of digital standards and radio frequencies currently in use in digital broadcasting and mobile telecommunications, all of which are continually upgraded into their “next generations” about every two years. Because the life cycle of a car is significantly longer, drivers are constantly “falling behind” when new systems are released.

The PROTON-PLATA project is researching whether SDR (software defined radio) is the possible answer — technology which will allow all of these systems to be implemented in a single hardware unit.

BMW’s AMULETT (active mobile accident avoidance and mitigation of accident effects through cooperative data acquisition and tracking technology) project focuses on using car-to-X systems to actually communicate with people. The system includes a radio transponder that cyclists and pedestrians wear, which notifies the driver when the wearer is crossing the street or stepping out from behind a parked car. 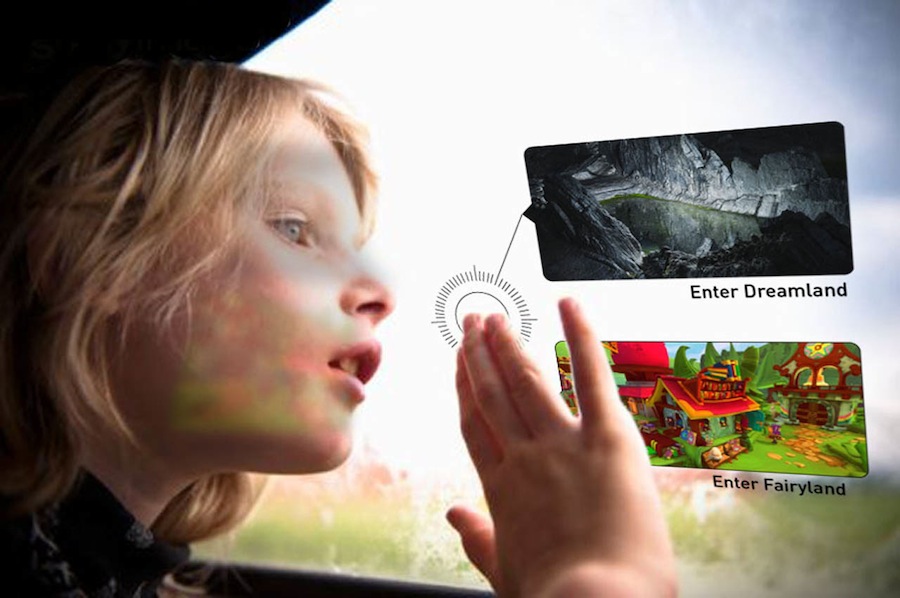 Also known as apps. A shift from hardware to software in car systems will mean that by 2020, you won’t need to bring your car in for an actual installation every time you need an upgrade. Just like with your smartphone, it’ll be as simple as visiting the app store. And as Car and Driver pointed out, these systems are relatively inexpensive for car makers, as the technology is already standard in the computer and mobile industries.

This paves the way for developers to focus on entertainment and utilities apps specifically for the driver. Apps to find your “perfect match” on the road. Apps that adjust the music to suit your mood. Apps that adjust the lighting to calm you in stressful situations. Apps that wake you up when you start to drift off thanks to soft music and dim lights. 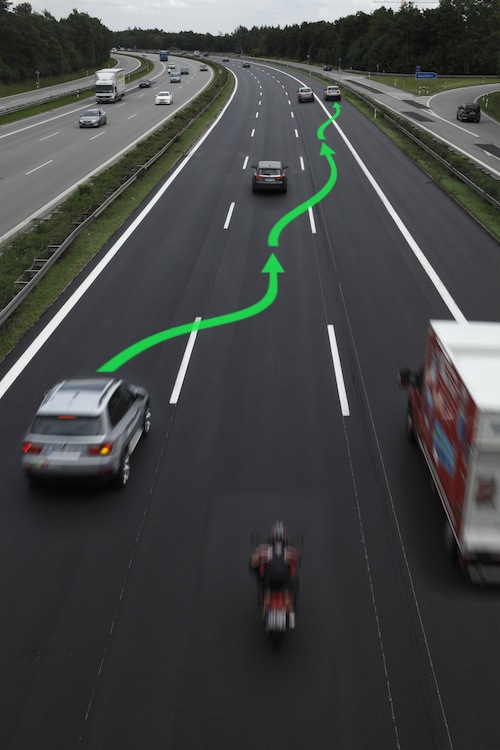 At the Busan International Motor Show in South Korea last month, Hyundai Motor introduced Bluelink, an IT controlling system that allows smartphone owners to find, unlock, and start their car remotely, as well as turn on the AC and opt to receive texts if there is damage or a break-in. BMW is working on remote-controlled parking.

The next version? Maybe an app that memorizes your preferences and utilizes GPS to detect your proximity to your car. By the time you slide into the driver’s seat, the AC is cranked, the music is on, and there’s a hot cup of coffee in the cupholder. (It’s possible, right?)

Safety and emergency notifications can be helpful in preventing accidents but, in many cases, a barrage of beeps and ominous blinks only adds to a stressful driving situation.

The solution for some manufacturers is a “pre-safe” system. Scenario: A car in front of you slams on the brakes, and your car senses it’s too close. The system primes the brakes so that even a light tap of the pedal will apply full force, increasing your chances of stopping in time.

In emergencies, your car may even be able to take control and guide you to safety. For example, if your car detects you’re having a heart attack or losing consciousness, BMW’s Emergency Stop Assistant system will locate your car, flip on the emergency flashers, use sensors and video to monitor surrounding traffic, steer you safely off the road, and place a 911 call.

Technically, the invisible chauffeur already exists — Google has been test-driving driverless cars in California. Nevada recently approved licenses for “autonomous vehicles,” meaning if you see an empty car cruise down the strip, there’s actually a chance it isn’t a drunken hallucination. And General Motors claims it will have its own driverless cars on road by 2018. An invisible co-pilot, however, has already made its way into upcoming models.

Your car will help you parallel park — if you’ve got a Lexus LS 460 L, the Advanced Parking Guidance System asks you to align the car and put it in reverse before tapping a button. After that, take your hands off the steering wheel, control the speed with your foot on the brake, and let the car manueuver its way in. 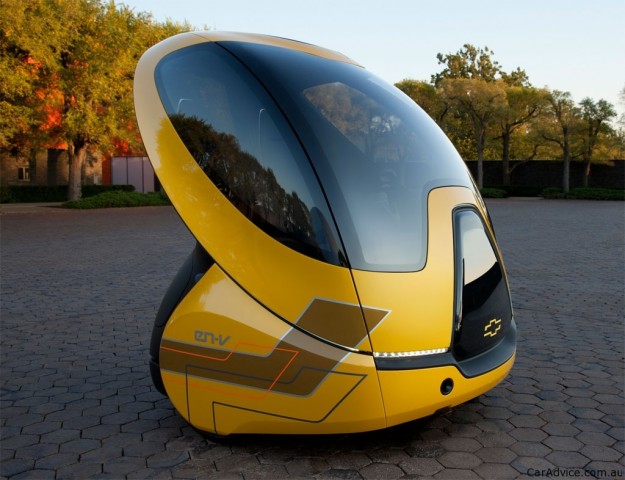 Cruise control can go beyond staying at a set speed. With radar sensors on the front of your car, the system will detect the speed of and distance between you and the car in front of you, adjusting cruise control to keep a safe distance.

The co-pilot will also watch out for lateral collisions by using a variety of sensor technologies — lidar, radar, ultrasound, video — to monitor the area surrounding the car and, when another car or object gets too close, applying a “directional impulse” tug to the steering wheel.

Ford has announced the development of a car seat with sensors to monitor your heart rate using electrical impulses. Mitsubishi Electric has plans to take this much further, and they believe such an interface will be a reality within the decade.

“Things like the seat position can be customized for all kinds of people,” said Kiyoshi Matsutani, Manager of Automotive Electronics Development Center, at the 2011 Tokyo Motor Show. “This is done through personal ID, facial temperature measurement, or heart-rate measurement using a Doppler sensor. In this way, the system senses the person’s health condition on that day. The aim is to position the seat and steering to match the driver, and provide information to help with safe driving.”

Researchers at organizations like the Continental Corporation in Germany are focused on using technology to make cars more eco-friendly. According to Popular Mechanics, Continental is developing an interface that includes an “eco” mode, which can search for the most economical route and offer other “green” tips. The system rewards eco-friendly driving behavior — when the four-leaf clover display is filled green, the driver is eligible for rewards from their dealership.

If your future car will be able to communicate with other cars, systems, devices, and humans, why not your bank? BMW has developed a key that functions as a credit card. In 2020, your entire car might become one. Skymeter calls it “Financial GPS.”

“With Financial GPS, consumers can get one bill at the end of the month for every car-related cost: their parking, their insurance, their lease, their roads, even full repairs coverage,” said Kamal Hassan, Skymeter CEO, in a Mashable interview.

“Everything would be paid automatically per minute or per mile, based on your actual driving and parking. Drivers could then control their costs. Not driving for a week would save you money on your lease, your insurance, and even your municipal tax bill.”

This may mean we’re facing a future in which toll passes forever lost between car seats have become obsolete.

This article is brought to you in partnership between Matador and our friends at Intel, whose technology enables so much of the lifestyle in which we thrive. Join us in the conversation on Twitter with #IntelEMP.

Tagged
Travel Intel: The Future of Travel
What did you think of this story?
Meh
Good
Awesome
✖
travelstoke
Download the mobile app
stoked by