Tina Trachtenburg has long been an artist and a performer (too bad for you if in the first decade of the aughts you missed her familial collaboration, anti-folk band the Trachtenburg Family Slideshow Players), but her newest artistic endeavor goes deeper than presentation. Mother Pigeon is an animal advocate who creates soft pigeon and rat sculptures and then sets up “flash flocks” on the streets and in parks of New York City. Passerby may first be alarmed at the swarm of usually reviled creatures, but that’s exactly the point: sometimes a city’s best resource is what’s usually discarded.

Mother Pigeon earned her title when she started feeding a flock of so-called flying rats on her rooftop. They began to follow her when she left her apartment, and Tina began to develop a nuanced relationship with the flock. Her first “outstallations” included just a handful of homemade birds, but they now can fill several sidewalk blocks, and she’s started making rats to keep the birds company. Pigeons and rats may not be the cuddliest or most loved natural creatures, but you’ll never look at them the same after an encounter with Mother Pigeon. (She can be found most frequently at Union Square, Washington Square Park, and Tompkins Square.) 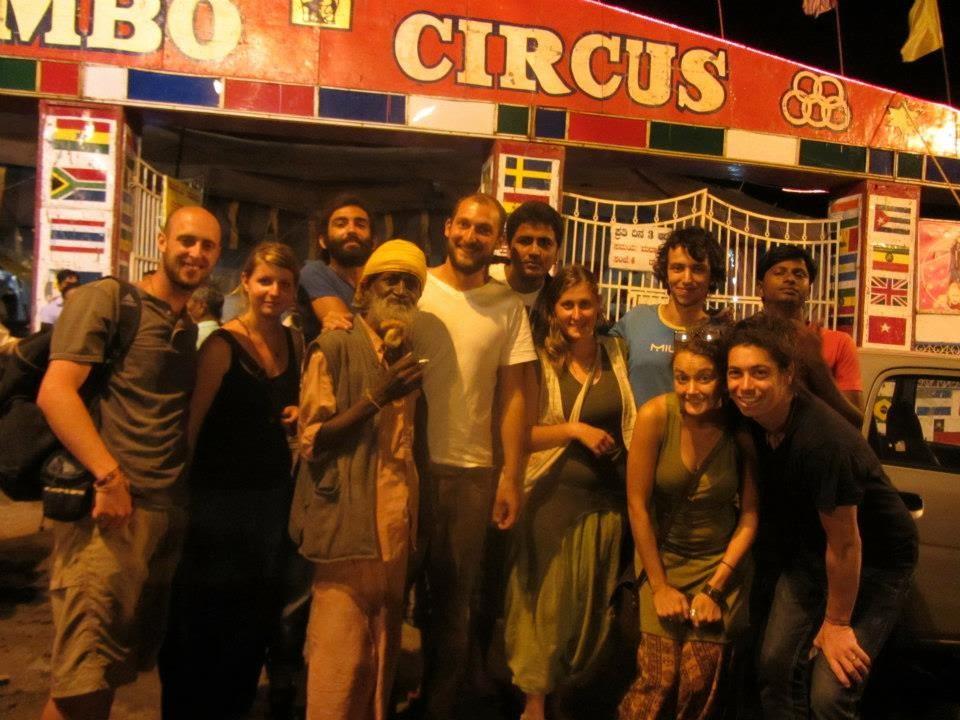 Not all babas are created equal. When I first met Baba Ganesh he was standing outside a crumbling temple, holding his hand out for donations. As all enterprising babas are apt to do, he was dressed the part to pose for pictures with tourists in a bright orange robe and tilaka paint, adorned with several strings of dharma beads. Having been in India for several months at this point, I wasn’t particularly smitten with his “authenticity, and refused his request. Later that week I had a devastating motorcycle accident and broke two bones in my leg, effectively trapping myself on the far side of the Tungabhadra River, unable to walk for four months. Word got around the tiny town quickly that a gora had had an accident, and though we hadn’t actually met, Baba Ganesh was among my first visitors.

The thing about babas in India is that a lot of them are either fake money-grabbers, or so holier-than-thou that you feel you have fake it to fit in. Baba Ganesh is neither. He’s the real deal: he’s definitely a little wacky, but he listens, and tries to understand any questions you may have — and it’s worth trying to listen to him. One night we took him to a circus in Gangavati and when we were all posing outside of the tent to take a photo, another tourist approached and asked to get a photo with Baba Ganesh as well. He laughed, and refused. “I’m not working,” he said good-naturedly. “These are my friends.”

There’s no shortage of stereotypes when it comes to Koh Phangan — perhaps the most famed island in the world for debauchery, buckets of cheap booze, and epic raves that originated with the now-famous Full Moon Party back in 1988. Today, the Full Moon parties have devolved into trashy displays of hedonism, and Haad Rin Beach, formerly a haven for hippies floating in on wafts of pot smoke and acoustic guitars, is packed with neon tank-top wearing millennials who can’t hold their liquor. The question: can any legitimate rave scene exist when two decades of notoriety have attracted unconscientious masses? The answer: Cowboy Billy*.

Cue Cowboy Bill’s Guy’s Bar, located a short boat ride away from Haad Rin on Haad Tian Beach. An American Burner transplant, Cowboy Billy has created the kind of space you thought only still existed in your favorite scene from The Beach — complete with a bar where you can buy party treats of the non-alcoholic variety. Every Friday night world-renowned DJs take the stage for a dance party of epic proportions. Swinging bridges and wooden walkways wind through jungle overgrowth to an idyllic series of huts and gardens with plenty of lounging spaces and dance floors. One conversation with the proprietor and you realize that he doesn’t do it for the fame like a club promoter — he truly believes that the best parties aren’t the ones that make the news. Cowboy Billy proves that love, lights, intention, and good music conquer all: even neon tank-top wearing millennials who can’t hold their liquor.

The popularity of ayahuasca ceremonies has exploded recently: you’ll find shamans offering experiences from art spaces in Brooklyn to churches in New Mexico. If you’re not familiar with this sacred root, it’s worth reading about before diving in — but if you’re ready, and, as the saying goes, “it will find you” when you are — it’s best experienced in its native land. Salento is a picturesque town in the café zonateria of Colombia, nestled right on the edge of the jungle and situated among rolling verdant hills speckled with coffee farms and grazing land. Taita Carlos is the area’s most easily accessible shaman and a swell guide if you’re ready to foray into psychedelic medicine.

The thing about ayahuasca is it’s just that: medicine. Taita Carlos — like all real shamans—isn’t going to be able to help you if you’re trying to meet him to get messed up. It’s not a party, and it’s not necessarily “fun.” But it’s life changing, and 100% worth it. Like all true teachers, it’s not necessarily what you’ll learn from Taita Carlos himself, but the tools to evolve that he’s able to give you that resonate. 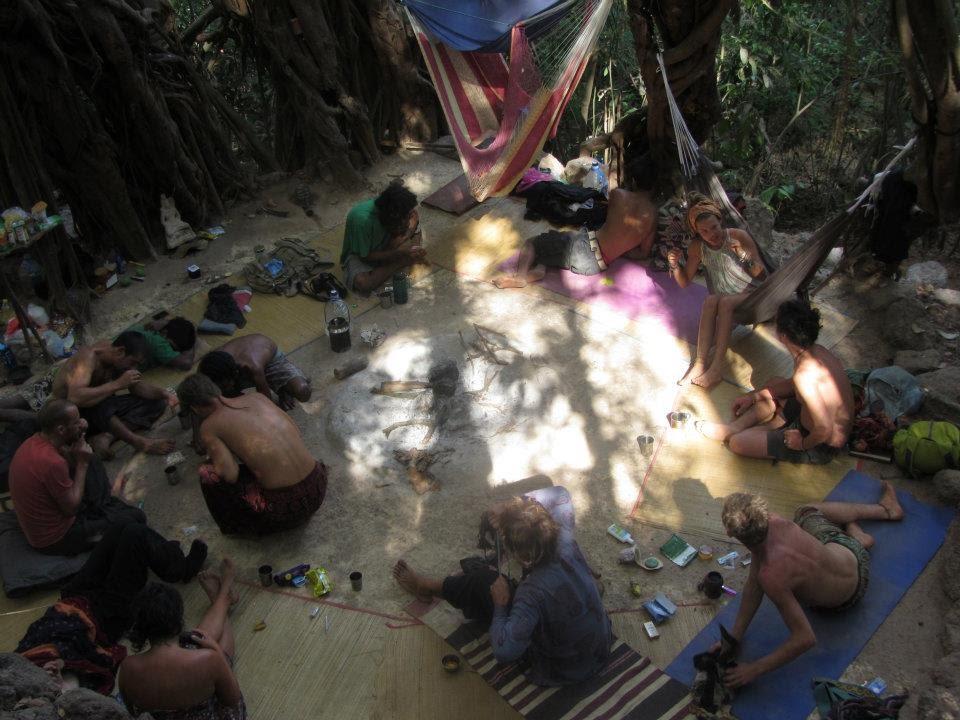 Goa is known for its beach parties and laid-back vibes. While Anjuna Beach may reign supreme as the go-to hippie spot — likely because of its claim to fame as the birthplace of trance music — Arambol could be northern Goa’s best-kept not so secret. And the best-kept secret of Arambol could be its ginormous Banyan tree tucked away about a mile from the coast in native jungle. Locals claim that the tree is over 1,000 years old, and that hundreds of spirits live in its widespread roots. It’s also home to Baba Bolenath, a baba who lives on the donations of passerby who spend the night in his tree, who claims to have been living there since the 1970s.

Baba Bolenath may be the complete opposite of Baba Ganesh—and in the interest of full disclosure, he’s one of the holier-than-thou variety that may make you a tad leery at first. But perhaps that’s his lesson: you can never judge a baba by his robes. When we arrived at the Banyan tree, without saying anything, Babaji packed his chillum and passed it ceremoniously, imploring each of us to smoke. I’d never smoked a chillum before (this was the beginning of the India trip) and did it incorrectly — Babaji took it from me and dumped the contents into the fire. I was mortified. It took me a few hours to get up the courage to approach him after that, but when I finally did, we had one of the best conversations I’d ever had, with anyone. If you allow personal judgments to cloud your perception, you could miss a brush with enlightenment. And if you embarrass yourself by pretending to know how to do something you don’t, the best way to move past it is to apologize and listen first next time.