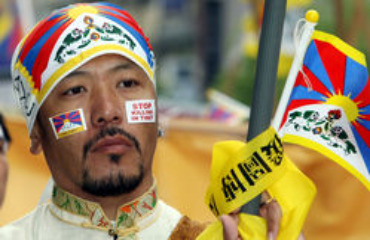 Organizers in Taipai held a protest last Saturday to mark the 50-year anniversary of the Tibetan uprising against Chinese rule, which led to the exile of the Dalai Lama.

The protestors, which included over 30 civic groups and 300 people, called for the government of Taiwan to allow the Dalai Lama to visit the capital city.

Taiwanese activists warn that “Tibet is a mirror of Taiwan,” and that if things continue in the same direction, China will achieve its ultimate goal of annexing Taiwan.

Days later, a bomb exploded at a government office in a Tibetan-dominated region of China. The Xinhua news agency stated it was “a bomb thrown by terrorists,” but declined further details and said the explosion is being investigated.

According to the AFP article:

Chinese authorities have launched a massive security clampdown in recent weeks in a bid to quell possible unrest as Tibetans mark the 50th anniversary of a failed uprising. They have also curbed travel by foreigners to Tibet while overseas journalists have been barred from most Tibetan inhabited areas in China.

March 14th also commemorated a year since riots occurred in the Tibetan capital of Lhasa, in which at least 22 people died and over 950 monks, nuns and villagers were detained.

As the United States works with China on stabilizing the world economy, will Tibet and other human rights issues stay on the front burner?