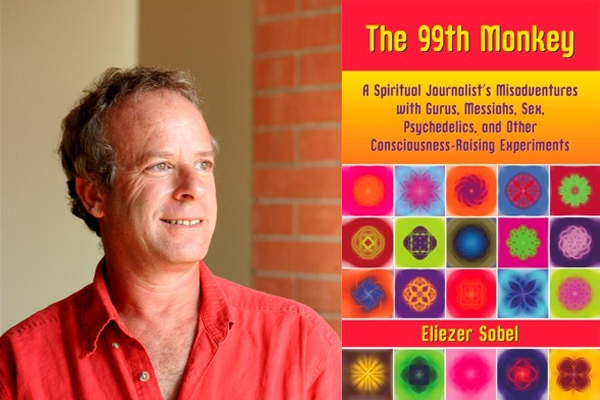 Excerpt from Chapter 5 of The 99th Monkey: A Spiritual Journalist’s Misadventures with Gurus, Messiahs, Sex, Psychedelics, and Other Consciousness-Raising Experiments

At the other end of the spectrum in the devotee department is Sathya Sai Baba of Puttaparthi, India, who boasts of some 30 million followers, or more, worldwide. So if it ever comes down to a vote, he’s a shoo-in. 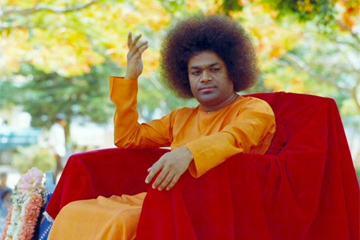 Baba is famous for his wild frizzy hair, orange robe, and the fact that he can wave his hand around and make vibhuti—holy ash—materialize and pour from his fingertips. He’ll occasionally pop for ring, necklace, or trinket manifestations in this manner as well. Ram Dass once said that he was informed by a close devotee of Sai Baba’s that “Baba doesn’t create these things; he simply transports them from his warehouse.”

Ram Dass also reported that Baba, knowing he was dealing with a Western academic and skeptic, rolled up his sleeves and placed his open palm right under Ram Dass’s eyes, who then witnessed a blue shimmering light suddenly congeal into a little trinket. (But just consider that warehouse for a moment, piled floor to ceiling with rings and trinkets that Baba probably gets wholesale. Some of them may still even have the label on: Materialize with Care.)

I spent three weeks at Sai Baba’s ashram in 1990, along with about 20,000 others, reduced from the two million who had just been present for Baba’s 65th birthday celebration. (That would make him about 83 now.)

His method of granting darshan to the gathered millions had been to fly over the crowd in a helicopter and wave. So if it’s personal intimacy you’re after, He’s not the Messiah for you, unless you happen to be young and male, but more on that in a bit.

Time at the ashram was organized around two main events daily: each morning we’d rise at 4:30, dress in white, and wait in long lines for hours until being admitted into the temple compound. Lottery determined the order of entry; the first line inside got to sit in the front row and have a better look at Baba when he would finally emerge and slowly perambulate the grounds for all of 10 minutes. 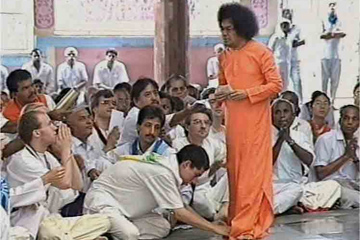 A similar routine was repeated in the late afternoon, except the lottery winners got to go inside a small temple and chant with Baba. I sat in the first or second row several times, just a few feet from him, sharing direct eye contact for minutes at a time, so I figured that if there was a transmission to be delivered, I was in the optimum position. But alas. Other than that, there wasn’t much to do all day except sit around and listen to people attribute all of their daily life experiences to Baba’s Grace: “I was standing at the corner, and Baba made the light turn green.” “I have dysentery—Baba’s cleaning me out.” And so on.

Like Da and Maitreya, Baba is also considered by his followers to be the Absolute Living Avatar of our age, a direct appearance of God in our midst. He promises massive, apocalyptic changes in the near future, putting many parts of the planet underwater. I, like countless others, witnessed his most well-known and frequent miracle: standing less than 10 feet from me, sleeveless, I watched him wave his hand in the air and make huge quantities of vibhuti come streaming from his fingertips.

Debunkers, on the other hand, claim that slow-motion videos will reveal Sai’s masterful sleightof- hand maneuvers. Most interesting, perhaps, are those, like Ram Dass, who will say that the materializations are real but completely superfluous when it comes to what’s important in spiritual life. Baba himself says the miracles are his “calling card,” and that “I give you what you want until you want what I have to give.”

The ashram had a museum of world religions, which included state-of-the-art displays, behind glass, about Hinduism, Buddhism, Christianity, Islam, and a few others, perhaps Jainism and Zoroastrianism. Tucked away in a corner, as if it was an afterthought, was a little thrown-together exhibit of Judaism. Essentially it consisted of a table with a few ritual items tossed on it, mislabeled in someone’s scribbled handwriting on index cards.

The tefillin were identified as a menorah, the menorah as a yarmulke, and the yarmulke as a tallis. (Tefillin are small leather boxes containing passages from scripture that Jews strap to the arm and head for daily prayer. It is considered by Orthodox Jews to be a mystical two-way radio of sorts, providing a direct line to God. A tallis is a prayer shawl, and a yarmulke a skull cap.) I switched all the little cards around, as if I was playing the Jewish version of three-card monte: “Watch the cards, follow my hands, which one is the tallis?”

Sai Baba’s “logo” is a symbolic representation of all the world’s major religions—an Om, a cross, etc. Someone once asked him why Judaism wasn’t represented, and Baba’s response—this from the Avatar of our Age, God to over 30 million followers—was to say, “I thought Judaism was included in the cross.” Of course to devotees, who believe Baba to be infallible, this was a cryptic response with a hidden teaching. Given what I saw in his museum, I didn’t think so. 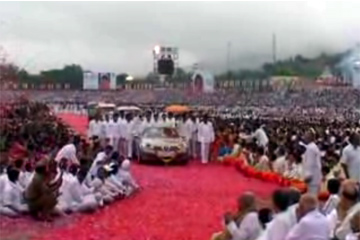 While millions of people worship Baba as God, he himself says that “You are God, you just don’t know it. I also am God, but I know it.” And yet the feeling at the ashram was definitely that Baba was the real God and the rest of us 20,000 schleppers had to hope and pray that he might hear our prayers and pick us out of the mob one morning for the daily small-group interviews, where the truly blessed received a ring or necklace that Baba would materialize.

Devotees will tell you miracle story upon miracle story about Sai Baba, from vibhuti appearing on their photographs of him to tales of raising the dead. Perhaps the most outlandish story I heard is that he has 12 disciples living far up in a Himalayan cave with only a magical crockpot for sustenance, which Baba fills from afar with their daily meals, and he occasionally teletransports to appear before them and deliver further instructions. Now that’s Messiah material, if you ask me.

To be fair, some rather remarkable coincidences and startling events did happen to me there. Out of the 10,000 or so male visitors at the ashram, I found myself assigned to a bed across from Alan Levy, a follower of Hilda Charlton’s from the old days whom I hadn’t seen in perhaps 12 years. He just happened to be traveling with copies of a just-released book I knew nothing about, entitled The New Sun, a collection of Hilda’s articles from my own magazine! And there on the first page of the introduction my own name was mentioned.

Hilda had been very fond and respectful of Sai Baba, and to receive her book from Alan over a decade later, sitting in the bed across from me at Baba’s ashram, a 1 in 10,000 chance—well, it gave me pause, to say the least. Another even more remarkable thing happened to me at Baba’s that I will get to later. But for now, these fortuitous events notwithstanding, the day I was to depart from the ashram, the small group of new friends I had been hanging out with had figured out that I was not a real devotee, not sold on Baba after three weeks there.

One of them laughed confidently and said to me, “Just wait and see—there are always stories like this. Someone comes here and doesn’t really connect to Baba, and then as soon as they leave, something happens. You could be walking in Bangalore and a complete stranger could come up to you on the street and say something about Baba, and you’ll just get it.” He and the others bid me an affectionate farewell, not a doubt in their minds that Baba would triumph over my resistance in the end.

Ordinarily, I enjoy getting out of the hustle of a city into the quiet repose of a spiritual ashram. In this case, though, when I got into Bangalore I felt amazingly liberated, as if the ashram had been a cage and I was free again.

And then, sure enough, as everyone predicted, I was wandering the streets when a total stranger—an Indian—approached me completely out of the blue, and said, “You have just come from Sai Baba’s?” Boing! My heart jumped. “Well,” he went on, “I just want to tell you that I lived there with my wife and children for 15 years and we finally had to leave in disgust because we found out all his materializations are a fake, they’re just magic tricks, and we also found out he is a homosexual and makes love to the little schoolboys who come to meet him.”

I have no idea if any of that is true. I hope it isn’t, but a Google search will reveal an enormous can of worms; an assortment of scandals and accusations, including murder; and certain Christian fundamentalist groups have identified him as the Antichrist.

My response upon hearing this stranger’s report on the street was to pranam—bow with my hands in the prayer position—and say, “Thank you.” For it freed me, and enabled me to stop thinking about Baba and whether once again I had just met God Himself incarnate and missed the Ultimate Boat due to my sheer inability to surrender, see the light, whatever. Being the 99th Monkey is an incredibly tough job: you even get to meet the Avatar of our Age face to face and remain impervious.