EVERYONE WAS CLAPPING THEIR HANDS and singing like it was a wedding. “Wait!” I wanted to shout. “Tone it down! Think of the eight-day-old baby and his doomed foreskin.”

Jerusalem holds any number of spiritual events each day. Most don’t involve bloodletting. Maybe I am just averse to people being bled without being asked. Maybe it’s just muscle memory. The last bris I attended was my own.

The hall in Jerusalem’s Nachlaot district, with its many Jews from Arab lands, was packed with the New Age followers of Rabbi Shlomo Carlebach, long dead, but reborn in his nigunim (wordless spiritual melodies) that everyone was humming. His followers were precisely as I remembered them from 40 years ago, the men slender, delicately bearded, eyes closed in ecstasy, the women heavy with the weight the men had shed, and with long dresses belled at the ankles.

The end of a foreskin is not the end of the world.

The long table was crammed with fruit, bread, whiskey, and lox for the post-bris celebration. So much food in exchange for a little baby’s pain. An exile from the big picture, I was aware that for the mainstream Jew the Abrahamic Covenant was worth the pinch. The end of a foreskin is not the end of the world.

Eventually, the little baby — silent, invisible, buried in white blanketing — was brought in by his parents. The singing, the hand clapping, the ecstatic movement of bodies, intensified. The baby didn’t stir. Was he in intuitive shock? My palms were sweating. In Jewish tradition, when a father or a mother dies, you rip your shirt or your coat as a sign of mourning. You don’t rip your flesh. 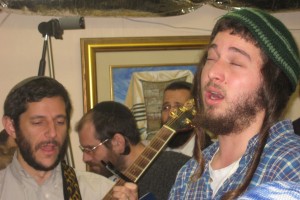 I found myself mentally flipping the circumcision ritual so that possibly a radish head could be slashed instead. But a radish head, unlike a penis, seemed hardly compatible with continuity. Amidst all of my anxiety and questioning, something unexpected and quite moving and very Shlomo-like, unfolded. The mohel (ritual circumciser), a reassuringly solid looking man with a shallow beard, was calling out the names of men who then got to hold and bless the tiny creature. I noticed the slight trembling of their arms, and the gentle uncertainty of their faces, as if unable to decide how best to navigate such innocence. It was easy to fall in step with this part of the ritual’s choreography.

Suddenly, the baby was back again in the mohel’s arms. Everyone fell silent. The mohel’s thickly cadenced prayers rose up from the silence. I heard my futile sigh arise. A piercing cry washed over it, connecting the baby with Abraham’s hard day many centuries ago, when God asked him, then did not allow him, to sacrifice his son to him.

I waited for the cry to stop. No amount of singing could drown it out. It spoke of a broken world, his own. And so soon.

Holy Week in the Holy Land

With the Women of the Wall