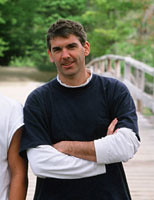 Note: Read to the end for your chance at a fabulous prize!

Gonzo travel guys seem to visit these places and merely raise an ironic eyebrow over their tourist priced beer while not being particularly bothered one way or the other about the fate of underaged prostitutes or women who make money by writing banners with markers stuffed in … oh, you get it.

It disappoints me when these otherwise funny, smart, insightful, (many positive adjectives here) seem to give sex tourism a get out of scrutiny free card.

I have to read the sections in question in “Smile When You’re Lying” again to confirm this is correct and that I’ve not put the book down with a false impression.

That’s all I’ve got by way of criticism about Chuck Thompson’s hilarious, painful, scathing, and again hilarious book.

It was especially excruciating to read it following our press junket. We both indulged in and were victims of all the things Thompson takes down in his book – the freebies, the PR rep hosted cocktail hours, the nonexistent support for our trip from the publisher, and still, I sit at my desk every day involved in the terrible evil of writing noncritical prose about our destination.

Forgive me, Thompson, for I have sinned, and am surrounded by sinners.

I spent the two days it took me to read the book – I could not put it down – alternating between groaning and laughing. Thompson takes potshots at travel writers, editors, expats, English teachers abroad, the programs that sponsor them, Paul Theroux, and the nicest guy in travel, Rick Steves. Rick Steves! Who takes shots at Rick Steves?

Sadly, he’s right on with most of it. Most commercial travel writing is insipid. Real travel stories, those about getting ripped off by four Catholic schoolgirl types or the ridiculous things expats will do to cope with the crippling boredom of being isolated in a culture not your own (a-hem) never make it to ink.

Thompson spins a travel tale the way it should be done, leaving out none of the good stuff that sets the scene, glossing over none of the ugly details sitting just off screen.

Editors need to sell ad space to hotels and airlines and oh, Expedia, and stories of your (you thought) near death at the roadside are not going to encourage readers to travel.

True story: I once wrote a story about the lodge out on Lake Quinalt on the Olympic Peninsula. It’s a lovely place, but they gave us a room with no view (fine) over the kitchen (noisy). I gave the place a decent review – it’s a nice place, actually – but I also suggested that visitors might want make sure they’re not over the kitchen or the restaurant.

The editor killed that remark, and it wasn’t because of the word count. I also wrote a piece about sailing in which I opened with my great dislike of watercraft, but that got reworked to. First person adventure, be gone! All of a sudden, I love boats. Dude. I hate boats.

I loved the writing in this book. Thompson spins a travel tale the way it should be done, leaving out none of the good stuff that sets the scene, glossing over none of the ugly details sitting just off screen.

He’s got unflinching nerve – talk about biting the hand that feeds you – doesn’t spare himself when it comes to criticism, and he’s just plain funny. Smile When You’re Lying is a great read for expats, travel writers, wanna be travel writers, and people who think travel writers have it easy. Hilarious.

Sidebar thing I’m pysched about: You don’t read that stuff in magazines, but the sheer mass of Travel Stories on the Web means that the stories are getting told. They’re hard to find in all the noise, but while publishers are overlooking them, travelers are telling them on their own. Woot for that.

Post a link to your “never gonna be published” travel or expat story in the comments on my site. We’ll pick our favorite at the NEV HQ and send you the book. (Hmmm. Maybe we’ll do a reader vote depending on how many entries are posted. Stay tuned.)

You’ve got until January 2nd to post your links, I’ll send the winner my copy of the book sometime after that. If you can’t stand to wait, you can buy Smile When You’re Lying here.

Pam Mandel is a freelance writer and the travel editor for BlogHer. She blogs about travel, seafood, the ukulele, and more at Nerd’s Eye View.
What did you think of this article?
Meh
Good
Awesome
Bookmark
Posted In
Books

The 7 best cities in the world for book lovers