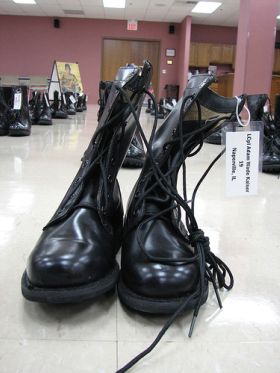 A former German Parliament member, judge, and apparently an honorary Colonel of the US Army has made a controversial offer.

Dr Jurgen Todenhofer promises a million dollars to the person who “brings George W. Bush, Dick Cheney, Donald Rumsfeld and Tony Blair in a fair and legal procedure before an American or an international court on the grounds of the wounding and killing of thousands of American GIs and of the torture, dismemberment and killing of hundreds of thousands innocent Iraqi civilians.”

Even bolder, he essentially compares the tactics of Bush, Cheney, Rumsfeld and Blair to Hitler by referencing the Nuremburg war crimes tribunal, which stated:

This made me begin to ponder the moral implications of living during this horrific Iraq saga. Have we become what the Germans were during WWII – at best complacent, and at worst participants?

Sure, there are people out there who would agree with Todenhofer’s bounty.

Jim Horn at the Schools Matter blog asks if anyone at the Obama Administration will step up to the plate after The Raw Story reported four dozen detainees killed during or after their interrogations (warning: the Raw Story article contains one of those awful photos).

And the group National Campaign for Nonviolent Resistance has demanded the Bush administration “be held accountable” (i.e. indicted) for what Just Foreign Policy estimates to be 1,320,110 civilian Iraqi deaths since the beginning of the invasion (a much higher number than most news sources would ever report).

But what about the people of the US, and the other countries who have sent soldiers to fight? That’s a whole lot of deaths on our watch, with no end in sight.

A Look In The Mirror

No, there are no concentration camps (though Gitmo may come in a close second), or a Fascist leader (though Cheney is beginning to look as if he deserves an eye patch).

Yet there is an entire culture of people being killed, mutilated, losing loved ones, and being singled out for discrimination when in other parts of the world. As House Democrat Charles Rangel said in a 2005 interview:

This is just as bad as six million Jews being killed. The whole world knew it and they were quiet about it, because it wasn’t their ox that was being gored.

Many of us carry on our lives as if nothing is happening, because what can we do? I wonder if the Germans asked themselves the same question.

Do you think the moral implications of the Iraqi massacre are the same for US citizens as the Holocaust was for the Germans? Share your thoughts below.