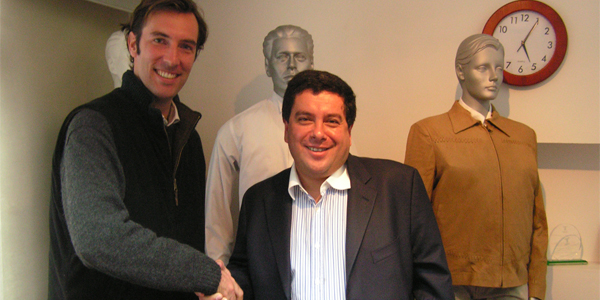 Feature photo and photo above courtesy of Richard McColl.

Richard McColl speaks with famed designer Miguel Caballero of Colombia, creator of bulletproof clothing and fabrics. What does it say about society when these products are in high demand?

On Thursday they planned to shoot me.

A brief phone call with the boss man himself and I had been given the green light to head down to Miguel Caballero’s warehouse, located a block or two west of Bogota’s infamous Transmilenio.

The idea was to check out Miguel Caballero’s products– top of the line bulletproof clothing for the wealthy– and write about the experience. But in the days preceding and following the interview, further avenues of investigation were opening up.

It would be both easy and interesting to write about Miguel Caballero and his client list, but with recent events in other Latin American countries I became further engrossed in the type of situation that has bred the need for bulletproof clothes.

The office is strategically located a short cab drive from multinational banking firm headquarters, international insurance agents and embassies. It is from this socioeconomic group that he finds his core clientele.

Passing a militarized van crammed full of bulletproof vests, I know that I have found the warehouse. Upon entering I am asked to take a seat in the waiting room. There are two of us here and it is cramped. The other individual is wearing a top of the line suit– I can see the cut– and when he gets up to shake hands with a sales agent, a pistol in its holster is revealed. 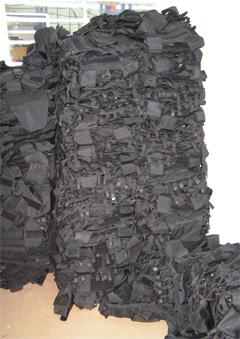 The Boss Man Himself

Amiable and with a self deprecating humor not often associated with someone in this line of business, Miguel Caballero cuts a completely different figure from the one I was expecting to encounter.

Hardly a mobster from “Scarface” or a villain masked by dark shades, he speaks openly and freely as if we are old friends.

He is clearly accustomed to my trivial queries, well-versed with catchy soundbites, capable of providing good interviews, just as my Google research revealed.

Miguel Caballero is big news and big business and is now a victim of his own success. His line of bulletproof clothing is designed to resemble ordinary leisurewear for ordinary (or not so ordinary, Venezuelan President Hugo Chavez and actor Steven Seagal are clients) people going about their everyday business.

He begins, after our initial pleasantries, by expressing his displeasure at being misquoted in a recent magazine article:

“My profit margin is not $9 million. I am an entrepreneur and therefore know that I need to reinvest to keep evolving my product. This company has taken me places and over 10 years we have established how to make and design our products and the subsequent 6 years have been spent learning how to sell this product.”

The figures are interesting but my mind wanders. There are photographs on the wall in this conference room depicting Caballero and several of his more famous clients.

“Who on earth would want to kill Steven Seagal? I mean I don’t rate his contribution of straight to DVD cinema, but it seems a little odd?”

Caballero smiles. “I really don’t know, but he is now a personal friend; he has a number of our items. In fact, he has a made to order bulletproof kimono, the only one of its kind in the world. Perhaps you can ask him yourself at the opening of our new headquarters.” 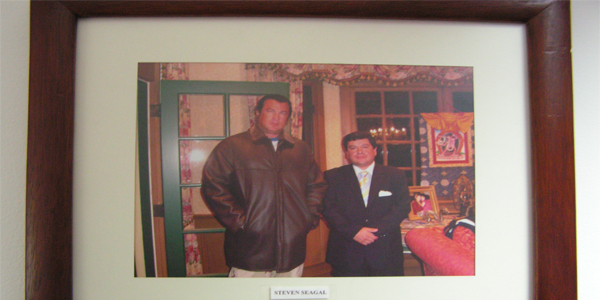 Bogota is no dank Gotham; neither is it Sin City. But there is a sinister reality and a grim metaphor for life in the real need for this line of clothing.

Pedro, key account manager for international business, takes over the tour of the factory and leads me through various rooms, where dozens of women are stitching away seated behind sewing machines.

“You can take photos here,” he gestures to a room where the women are preparing vast amounts of bulletproof vests for some branch or another of the Mexican authorities. I watch as one seamstress fastens “Tlaxcala” to the back of a vest.

“The Mexican market is very important to us right now.” I nod, knowing about the state of terror in the north.

It has been said by various commentators that the situation in Mexico is not dissimilar to that in Colombia in the 1980s: drug fueled anarchy and unbridled violence and cruelty, culminating in the beheading of police officers, kidnappings of children, and countless deaths.

“And here you cannot take photos” says Pedro. This room interests me most as they are putting together the vests and the bulletproof material. It’s a trade secret and obviously I am not permitted to know what it is that makes this product so lightweight and effective.

Thin yellow sheets of fabric are layered and then compacted. I can tell you no more because I simply don’t understand the exact science of this business. 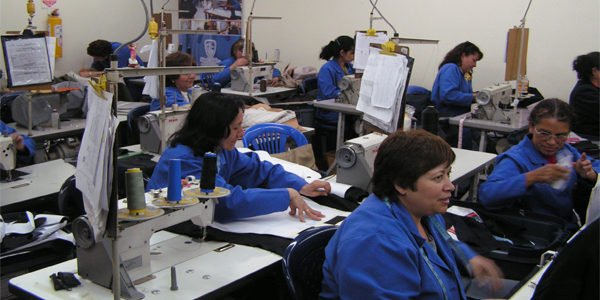 And it is an exact science. Miguel Caballero is selling a product not only to the high and mighty, not only to the wealthy, but to national law enforcement agencies with the guarantee that they’ll save lives. His clothes hold various qualifications and certificates of standard such as the NIJ (National Institute of Justice) from the US.

Talking with Edward, a Colombian Special Forces veteran and current security guard who is essentially my eyes and ears on the street when it comes to information about this sort of thing, I am surprised and a little uneasy when he lets me know a few key details about Colombia.

In order to become a security guard, armed courier and the like, all it takes is a three day course costing $80,000 pesos (US $47) and with your new diploma you can go and find work. I shudder; everything feels less secure.

Edward is understandably concerned that these people are coming in, charging less for their services, and are far from qualified, but that is not the whole picture. Many are displaced paramilitaries or guerrillas and are getting on the inside of various companies in order to feed information to compadres on the outside.

In Edward’s office, where he is in charge of recruits, he has turned away 42 out of 57 applicants this month because they do not have the “right” qualifications or he has investigated their past a little. “I know that everyone has the right to a job and a second chance, but I cannot take this risk. It is my job to ensure the people that we employ are sound and are not here to rip us off.”

Over a coffee he thumbs through the pages of the latest Miguel Caballero catalogue with its new Black Collection. This line is aimed directly at the rich and famous, and a number of the items look as if they have been pulled from a JC Penney catalog.

There are polo style T-shirts, slim cut Italian leather jackets and Gore Tex lightweight waterproof coats. Edward knows that he is unlikely to get his hands on this kind of protection and he understands this further when I mention that Miguel Caballero’s Black Collection is now on sale in the exclusive London luxury emporium, Harrods. 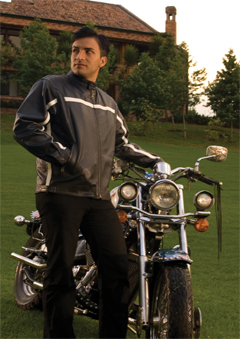 Someone–Miguel won’t tell me who–in Latin America has ordered a bulletproof bed cover. My initial smile during the interview at this revelation has now, upon reflection, left me feeling morose.

What kind of society is it where an individual feels that in order to get a good night’s sleep, in addition to the ubiquitous security guards at the front door, closed circuit televisions and personal arsenal, has also to commission something of this type?

“Should we see peace in Colombia,” says Miguel, “then our sales will increase.

Just look at other countries that have signed peace accords, for example Guatemala. They signed a peace accord over a decade ago and their levels of killings and delinquency have skyrocketed.

The simple question is this: What are these people who have lived all their lives in the military or in armed groups going to do once a peace accord is signed?

“In Colombia at the moment our sales are sales of prevention whereas in Mexico and Guatemala they are sales of reaction. But here in Colombia I do see hope.”

In order to fully believe in your product, you need to see that it works. Pedro shows me his video on his cell phone where he is taking a bullet at point blank range while wearing something from the Black Collection.

Finally, the interview comes to a close. My stomach knots and my palms are unseasonably sweaty. Surely this is when Miguel will get out his revolver. He doesn’t. I don’t remind him and leave before perhaps he realizes.

On Thursday, I escaped being shot.

To learn more about Miguel Caballero, please visit his website.

Finally, even though this article may lead you to think it’s too dangerous to visit Colombia, here’s a guide outlining 10 Reasons Why Colombia is Not as Dangerous as You Think.

Tagged
Fashion
What did you think of this story?
Meh
Good
Awesome