View all travel news
Top Destinations
Top CitiesView All Destinations
Trending Regions
Trending Cities
Load More
When the principal attraction of a trip is looking at other people’s lives, there’s a fine line between human interest and human zoo.

WHILE MUCH OF Africa is best known for its stunning wildlife and superlative National Parks, Ethiopia’s main travel draws are scenic natural beauty and fascinating people.

Therefore, it seemed only natural that when our overland trip passed through Ethiopia, we took a detour to the Omo Valley, an area rich in colorful tribes.

But seeing the excursion on our itinerary alongside temple visits, camel treks and countless game drives made me feel a little uncomfortable. When the principal attraction of a trip is looking at how other people live, there’s a fine line between human interest and human zoo.

In our short visit to this tribal region could we really learn much about a people’s traditions or were we just wandering through to gawk and collect a few snaps for Facebook?

On the jarring 12-hour truck ride to Turmi, a dusty town deep in the valley, we quizzed our guide Wesigne about the Hamer people, their customs and whether or not they would welcome interlopers.

When the principal attraction of a trip is looking at how other people live, there’s a fine line between human interest and human zoo.

He assured us that as well as being the most populous, the Hamer were the friendliest tribe in the region.

Sure enough, as our truck neared its destination the faces gazing at us from the roadside were smiling, though it is a little tough to appreciate a friendly wave when the outstretched hand is clutching a Kalashnikov.

Automatic weapons aside, the Hamer are a striking people, their chiseled, androgynous beauty marred only by the occasional decorative scars scored with inch-long thorns.

The Appeal of Tribal Tourism

For some reason, tribal living holds an undeniable worldwide appeal for tourists.

Admiring unique styles of dress and witnessing time-honored practices that have long-since become obsolete in western culture, offer a peek into a world that we only know from books and documentaries. 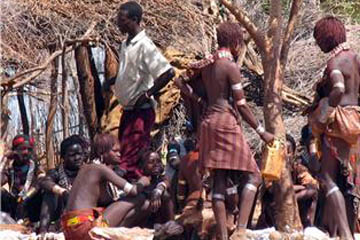 In fact, many people travel just to seek traditional cultures, shunning Western countries as boring, safe destinations. They want to visit those remaining corners where ancient lifestyles prevail before outside influences dilute and destroy them forever.

Yet by insisting on visiting these societies, perhaps we travelers are the very ones who contribute most to their decline.

Tourist visits inevitably bring items with them that are alien to certain cultures, items which many people believe pollute traditional societies by inflicting â€˜westernisation’.

During our brief visit to the Hamer, Wesigne was quick to scold a travel companion for giving his old sunglasses to a teenage member of the tribe. He claimed that, while seemingly insignificant, a gesture like this could gradually change the tribe – starting with their traditional dress.

But are these minor changes such a terrible thing? Why should we as outsiders be so intent on keeping tribal cultures so traditional?

Is cultural preservation a selfish desire, so we can take striking photos and have a riveting tale for our next email home?

We presume that anything western would be a pollutant, but perhaps even the most traditional of tribes would enjoy a few modern conveniences to make life a little easier.

It seems that Westerners are intent on preserving other people’s cultures, even if that means making those people work a little harder for their daily bread.

The Hamer have already swapped their traditional spears for rather alarming machine guns. No, they’re not part of the typical costume, but when you’re dealing with AK47-wielding cattle rustlers, maybe you need something more than a spear to defend your livelihood.

At times it seems that Westerners are intent on preserving other people’s cultures, even if that means making those people work a little harder for their daily bread.

While wandering through the hassle-free market (aimed at locals, not the trickle of tourists that venture to this remote corner of southern Ethiopia) our guide bumped into his good friend Kale, a Hamer warrior.

Curious to learn a local perspective, we asked what he thought of tourists visiting his tribe and were surprised by his response. Translated through Wesigne, he told us that tourism might actually benefit the Hamer.

“If we know that people are visiting to see our customs, we become more proud of them and maybe that means there’s more chance of us keeping our traditions alive,” he said.

It was a point of view that I had never considered.

If outside interest maintains pride in tribal traditions and travelers provide a small cash injection that enables rural dwellers to avoid the worldwide trend of moving to urban slums, is it possible â€˜tribal tourism’ could actually help to conserve traditional life?

As we left Turmi a day later, I tasted much food for thought. We’d worried that our visit might be met with hostility, but what we found was an overwhelming indifference towards tourists.

Perhaps it was shyness, perhaps a way of masking distrust, but I think that we were seen by the villagers as an inevitable occurrence that, for the moment at least, has little bearing on daily life.

On our return truck ride along the bumpy dirt roads I noticed two Ethiopians from out of town heading back to their homes after a day of trading with the Hamer. Their Nike shirts and shorts were coupled with the headbands and gold bangles sported by tribal warriors in a style I like to think of as â€˜Hamer Chic’.

It appeared that while outside influences are bound to change the tribe, cultural exchange is not always a one-way street.

Do travelers damage traditional cultures, or does tribal tourism keep traditions vibrant and alive? Make your voice heard by leaving a comment below.