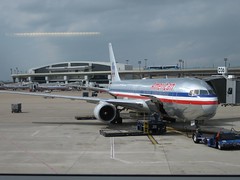 Nick needs a ticket to Argentina. Five of my college buddies and I are going to have a mini-reunion in Patagonia over Christmas and New Year’s.

We’ve all managed to find inexpensive plane tickets, except for Nick.

Nick is perhaps the most intelligent of my friends, but he is also far and away the most…easily distracted. (Think John Belushi with perfect SAT’s.)

Yesterday, I received an e-mail from Nick revealing he has yet to purchase his plane ticket.

Two things are clear: Nick needs to come to Patagonia, and he probably won’t find a cheap ticket on his own.

My sponsored review of the cheap flight finder SideStep.com has become a personal mission: I will use it to find Nick a cheap ticket, and I will get him to Argentina.

The SideStep homepage is big on potential and low on gloss. There are no flashy ads or distracting banners, just a simple, understated interface with a basic flight-search tool front and center and small print that says:

We search over 200 travel websites to bring you the very best travel values on the web.

There’s a slim, almost google-ish confidence to SideStep.com. Both use a deceptively basic, bare-bones and user-friendly exterior to conceal massively powerful and ambitious search machinery.

SideStep is one of the least flashy cheap flight-finders I’ve encountered, but it also claims to be the most powerful and efficient.

Yet – I still don’t know how well the site will actually work, or if I can find Nick a cheap ticket to Argentina.

Nick lives in Chicago but his family is in New York. My goal is to find him a round-trip ticket from either departure airport to Buenos Aires, Argentina or Santiago, Chile for under $1,200, $200 less than the cheapest fare I found using other flight-finders.

I tried New York first, typing JFK and EZE into the SideStep.com flight-finder and picking 2 dates in late December and early January. It only took a few seconds to enter the information, and a few more seconds for the search machinery to turn.

The first price I saw pop up was in the neighborhood of $3,000. Agh! I jumped away from the computer as if it had given me an electric shock.

In a couple moments though, a cheaper flight had appeared – $1,500, with a lay-over in Miami. Not awful, but not great either, seeing as last week I used another online flight-finder to get a $1,200 fare from Hawaii, to Argentina, to New York. 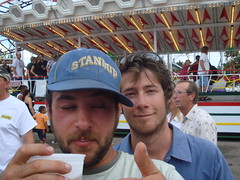 There was a handy little sidebar asking me to compare SideStep.com’s results with other popular flight-finders. Before I gave that a try though, I decided to register as an official SideStep member.

After I filled in the sign-up form, SideStep told me my e-mail address was already registered. Huh? This was my first time on the site, and a quick search of my Gmail archives didn’t turn up anything from SideStep.

I abandoned sign-up for the time being and tried to check flights from Chicago to Buenos Aires, using different dates. But I couldn’t get the search machinery to spin this time – it just gave me a blank screen.

I kept trying for about an hour, then gave up. (Other search programs were working and my Internet connection was reliable at the time).

Hmm. Maybe I caught SideStep.com at a bad moment.

The next day I went back to SideStep.com and tried again. This time, the site worked very smoothly, as the search machinery churned through hundreds of fares in only a few seconds.

I did find several very cheap fares for dates in February and March, including a $700 fare direct from JFK to Buenos Aires.

The lesson? SideStep.com can help you find cheap plane tickets swiftly and efficiently – but you still need to plan your travel more than a month in advance to find the best fare.

What’s your favorite place to find cheap flights online? Leave a comment below!