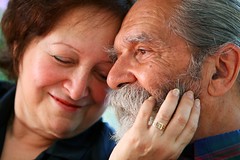 One of my favorite singers, Robbie Williams, complains in one of his songs that love is getting too cynical, while passion is just physical.

Each of us has a different experience related to both love and passion. If we look carefully at what is happening in the world around us at this moment, and especially in the Western hemisphere, one can conclude that the concept of love is undergoing serious changes.

Relationships are quite often based on material aspects and expectations. We expect the other person to change according to our own perceptions of what an ideal mate should be.

And passions? Passions are undergoing what I call ‘commercialization’. Being familiar with tantra and tantric massage, I find it sad that very often an offer of ‘tantric massage’ involves something which has nothing to do with tantra.

To Love And To Cherish

While living in Russia I had an ideal example of a perfect relationship from my grandparents.

While living in Russia I had an ideal example of a perfect relationship from my grandparents. And this came from both my maternal and paternal sides.

The mother of my mom met the love of her life when she was only eighteen. (Quite young, don’t you agree?)

She was very beautiful, very popular with boys and quite selective as to dating. But one day when she was sitting on a bench in a park surrounded by her suitors, a friend of hers joined them with a man she had never seen before. As my grandmother used to tell me:

“We just looked at each other…he took my hand and we left the group of my friends. We didn’t even talk at first. And a month later we were married.”

It isn’t surprising that they named their daughter with a beautiful name: Ã¢â‚¬ËœLove.’

I am still wondering what kept this relationship until death. Both survived the war, the waiting, the starvation, the rebuilding of life after the war, and their love never lost its magical touch.

My grandmom’s life actually ended when my granddad died from a heart attack. Since then she lived by his memories. It was very sad to see, but at the same time inspiring, because I wanted the same in my life.

To Have And To Hold 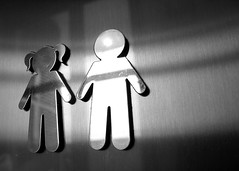 My other grandparents had a similar story, but with a different start.

My paternal grandfather, a proud and a stubborn Cossack (as long as I knew him his life was about Integrity), had to beg my grandmom for more than a year to marry him. He just knew when he met her: this is the woman of my life.

It took him quite a while to convince my grandmother. But since the day they finally married it was the Ã¢â‚¬Ëœfusion’ of two hearts.

At some point my granddad was sent to serve a political sentence in Siberia, and no one had any idea when he would return. My grandmother, with two sons at that time, was patiently waiting. They were starving, they were unsure of anything in their lives and they were packed into a tiny room with almost no facilities for more than three years.

It was faith and belief in the light of life, which kept my grand mom sane.

One day at the door of their tiny room she saw a man who resembled a skeleton. This was my grandfather, back from Siberia, having marched for a month back to his village. Was the secret of their relationship the fact that the name of my grandmom is Faith?

I look for the same magic which kept my grandparents so deeply in love. But this magic is almost non-existent nowadays.

Very often I ask myself a question: how come at the age of thirty-one I am still single? Despite the fact that I have such beautiful examples of what real love can be?

I think I know the answer. I look for the same magic which kept my grandparents so deeply in love. But this magic is almost non-existent nowadays.

We seem more interested in changing the other, in accumulating material things for quick satisfaction, instead of a fusion of two hearts and two bodies – this is what makes the real tantra.

How one can find a real love this day, when everything, including love, is commercialized?

Human beings can only survive when they feel loved. And despite the difficulties we encounter in meeting a right person in our contemporary world, the natural process through which human beings gravitate to one another will survive.

Love and only love can save the day.

Where does true love exist in the modern world? Share your thoughts below!

Ekaterina Petrovna’s current goal in life is to become a Porcupine. In the animal spirit world this animal represents rediscovery of wonder and trust in the Great spirit. She has a degree in interpreting and speaks 4 languages. In her spare time Ekaterina writes, reads Tarot cards, dances like crazy, laughs, and tries to make this world a better place to live.
Tagged
Sex + Dating
What did you think of this story?
Meh
Good
Awesome

Volunteering on national public lands is easy and very gratifying. Here’s how to do it.
The 10 best digital nomad visas from around the world
For solo female travelers, camping alone can be unexpectedly freeing
The Hunt for Beyondland: The Great American Family Road Trip
Flights to nowhere are growing, and they’re an insult to the planet