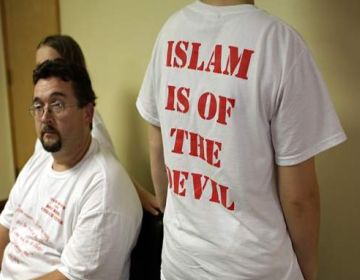 I don’t take a lot of comfort in the direction we are heading when I read that a 10-year-old wore a shirt to a Florida school proclaiming, “Islam is of the Devil.”

She isn’t the only one. Seems children who attend the Dove World Outreach Center are showing up at school in these kind and loving t-shirts (view the Dove Center’s explanation here).

They are being sent home by school officials when they refuse to change or cover up their apparel.

Free speech comes up against freedom of religion, although district attorneys have said the school is more than likely safe “from a First Amendment standpoint.” The US Supreme Court has ruled several times in favor of schools not allowing speech that may be disruptive to students.

My larger concern is the hate message being espoused to those of other religions by a church “based on the Bible, the Word of God…bring(ing) Godly changes to our entire society.” Especially when the news article notes:

Dove Senior Pastor Terry Jones said no local company “had the guts” to print the shirts.

Guts or anger? One of the member’s daughters, who also wore a shirt to school, said the “statement was aimed at the religion’s beliefs, not its members.” Ah, yes, of course.

I know this is nothing new, with the “shock” religious advertising that seems to have become a daily occurrence, but I have to say I always hope the next generation will be a bit more tolerant. But how can they possibly have tolerance when their parents are instilling these “we’re-just-trying-to-save-the-nonbelievers-from-going-to-hell” messages?

What do you think of this anti-Islam t-shirt? Share your thoughts below.