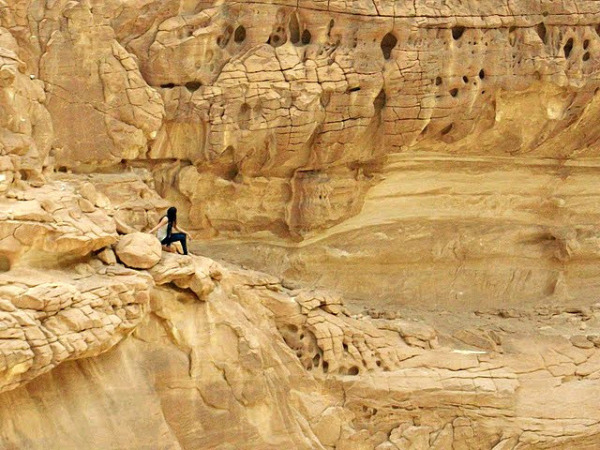 JOEL AND THE OTHER BRITS called at 2am to demand I get into their microbus, waiting below, to head into the Sinai for the weekend.

Packing a change of clothes and a volume of Arabian Nights, I was unwittingly rescued for a few days of camping along the Red Sea coast, two hours north of Dahab. Long nights passed waiting for the moon to hide behind the mountains so that we could see the stars, and entire afternoons escaped us watching the sands change shapes along the seaside.

The whole time, my friends didn’t know how lost I was. The thrill of Egypt was dimming after three months far from home, and I had become unmotivated and restless. After three tough years of college, I had built up this semester abroad to be my great catharsis that would fix everything.

But when it didn’t, the whole world looked grim. I spent hours on Skype with my mother upon our return to Dahab, wondering if it was time to head home – and by home I meant the States, the worst-case scenario. At heart, we both believed I should stay, but beating the homesickness and revitalizing was going to be a challenge. 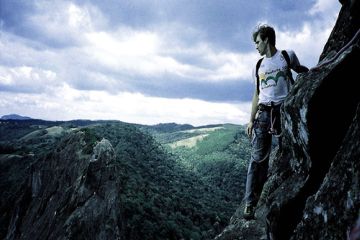 Worried, she thought for a long time and eventually had a revelation: Go climb Sinai.

The famous mountain was two hours away in the town of St. Katherine’s. Scores of travelers raved about the opportunity with its religious significance and rewarding natural scenery.

“Forget the other things and do this while you can, especially if it is there, and you are too. Climb the mountain, Liz.”

The idea went against everything I traditionally believed about my mother. She was accomplished and practical, reliable. She wouldn’t have run off to Dahab if she were in my shoes but would have dug in for the fight instead.

And now she wanted me to extend a trip and have a spiritual adventure. I was emotionally fragile, going through the motions for my friends – but my mother wanted me to climb a mountain.

Staying meant an extra two days of finding things to do before the ascent. The first evening our good friend, Dahab-native Mohammed, invited us to a Bedouin wedding he planned to attend. Driving through the night on a serpentine road, the mountains gave way to a massive camp lit with colored lights and teeming with men dancing and beating drums in celebration.

When we saw the enclosed female section, a girlfriend and I slipped in to try to meet the impossibly elusive Sinai women – and were accosted by dozens of vivacious Bedouin girls.

Though conservatively draped in black, their hips did things ours couldn’t conceive after hours of lessons. We were captivated and remained dancing with them through the night while the rest of the world slept.

Driving to the opening

The next morning we were tired but intoxicated by the memory of the women, and were collected by Sheikh Abu Salem, of the same family which had hosted the celebration. He drove us into Wadi Zaghara’s mountains and parked at an opening in the rock wall of a canyon.

We descended into the crevice, often bracing arms against one side of the narrow walls and legs against the other to keep from falling into deeper channels. After two hours, we climbed out into the sun on the lip of the plateau and were struck by silence and desert. What should have been a view of many angles was just one sweeping horizon.

Now exhausted, we parted with the view so I could catch that late bus to St. Katherine’s. I spent the drive half dreaming, tremors of excitement passing through my aching body.

What remained was a mountain standing between Cairo and I, and a sleepless microbus ride deposited me at the foundation. The moon was full and a thousand pilgrims lit the trail like fairy lights. Though familiar with the emotional dynamics of traveling alone, this was the hardest kind.

I recited familiar words privately: “What saves a man is to take a step. Then another…”

I recited familiar words privately: “What saves a man is to take a step. Then another…” I began upward, along a path crowded with people from all nations. The air grew colder and thinner as the hours passed and I stopped more frequently to slow my heart rate.

By the final stretch of the ascent, the wind had risen and whipped around every battered traveler until many were weary and hypothermic. Summiting in the freezing cold, I huddled on an edge next to a Dutch girl and we, strangers giddy from sleeplessness and endorphins, snuggled as the sky began to change.

A Danish boy and a German woman joined us in frozen desperation and soon we were warmed with laughter – an inexplicable joy and camaraderie only definable as the human condition. 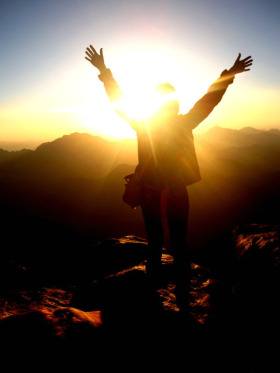 In three days, I had been taught to dance by the dark-eyed women in niqabs at a Bedouin wedding and had tea with a Sheikh and his cousins in their crisp white galabeyas and khaliji headscarves.

I had traversed the length of a canyon past Wadi Zaghara into the heart of the Sinai, climbing and grappling to survive much of the distance.

I had listened and conversed in a new language while the tea steeped on hot coals in the evening, and when the sun fell behind the western promontories, I was seated to learn the names of the stars from the Bedu.

I had witnessed those same heavenly lights scatter across the dawn and meet the sun again as it rose over Saudi Arabia. And finally, on this pale yellow morning, I felt myself falling in love with the human spirit once again.

The past few years were rife with obstacle and disappointment, but my perspective evolved over those three days in the golden heart of the Sinai. It is a common fault of youth to interpret a few bad years as all being lost.

The truth is simply that I had felt like wallowing in despondency, but I chose to summit a peak instead. There is nothing brave or heroic about it. But in my dark moments, I have held out for the sunrise.

Tagged
Egypt
What did you think of this story?
Meh
Good
Awesome