I SAT OFF to the side, but he sat right by the fenced-in Bodhi tree, a Westerner like me, only with a lot of the East added on: a loose brown robe, hair wrapped in a circular sadhu bun, face touched with the eczema of bliss dust.

Whoever wandered into his orbit he greeted the way an Irish regular in a pub greets the drinking stranger, only quietly. Watching myself watching him was my main spiritual practice at the Bodhi tree. 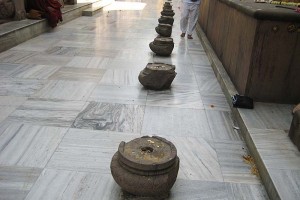 More so than meditating, than circling the big Mahabodhi Temple. Without even looking at me, he lifted the black stone inside me, and out came my entire reptile population of envy and alienation.

I thought they had disappeared, but they hadn’t. They were there all the time, smoking long cigarettes, waiting for the nameless man with the bun to press a certain button. The man was at home in his skin in a holy place, sucking in all the good vibes around him, and it drove me crazy.

I held against him the sin of spiritual posing; at worst he may have been just a professional pilgrim, an old man doing his best to do his best. And for all I knew, tender-hearted. 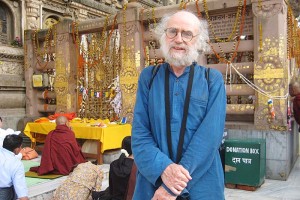 Author at the Bodhi tree

Could he feel the heat of my fractured brain? On top of everything, was he a collector of siddhis? Block your ears, ma, in the Jewish section of paradise, but it was not easy being an atheist at ten in your synagogue in the Bronx. Even the light that bellied through the window seemed to press down on me accusingly.

Did I see what I just saw? An intense Slavic couple actually touching his feet in homage? To get a grip, I reminded myself of the story I once heard Ariel Dorfman, the Chilean novelist, tell a group of us: A Chilean worker on the left, during the time of Pinochet, was arrested and exiled to Poland when the Solidarity Movement was at its height. He joined Solidarity and was arrested by Poland’s communist leader General Jaruzelski and exiled to Sweden.

“That worker,” said Dorfman, “should learn to avoid countries run by dictators in dark glasses.”

And I should learn to avoid holy places.

Tagged
Religion Narrative
What did you think of this story?
Meh
Good
Awesome

Conversations With a Child Monk in Bodh Gaya

With Aryeh Under the Bodhi Tree

Notes on a Pilgrimage to the Bodhi Tree