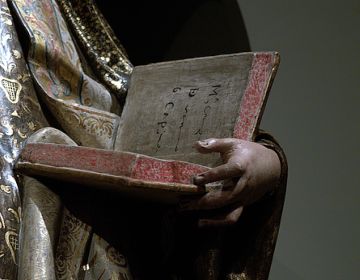 So what if Michael Jackson has made over $72 million since his death? Turns out even if you’re a saint, sometimes it pays more to be dead than alive (along with the possibility of even being called a saint).

AOL’s Daily Finance decided to take a look into the top-earning saints of all time.

Not surprisingly, Jesus’ mom ranks number one. The Virgin Mary’s got all those medals, statues, and candles going for her. Plus, think about all the many pilgrimages to places that are often far from home, including “Lourdes, Fatima, Medjugorje, and Guadalupe.”

But, lest we forget, the movie industry does enjoy its saints just as much as the next good Catholic, so when it comes to film, Joan of Arc rocks the big screen money. She’s been the subject of over 16 movies, plus, lest we forget, that TV show with Amber Tamblyn.

Also in the mix are St. Christopher, best known for safe travel (who apparently is also invoked by “bachelors, teamsters, epileptics, gardeners, porters, sailors, and toothache sufferers”), and someone you may have heard of even if you’re not Christian: St. Nick. A bit of sketchiness surrounds the history of the fat, jolly man, though; was he truly based on St. Nicholas of Myrna, Norse God Odin, or the Slavic “dark” and “light” Gods of Czernobog and Byelobog?

Either way, ‘ole St. Nick is making a killing. Or, at least all of the people selling toys in his name are.

The Mother of all Teresas

Which made me wonder about more recent saints, ones who have lived in our lifetime. First person that pops to mind (well, mine at least) is Mother Teresa. I wondered if she actually made any money in her life, and assumed she has made a lot more since her death. 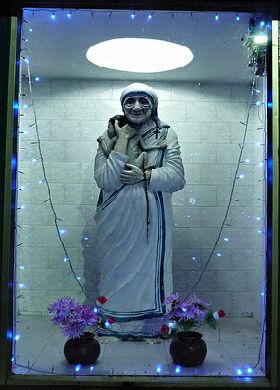 So I was a bit taken aback at this piece by Michael Parenti. In it, he claims that Mother Teresa received:

…Vast sums from wealthy and sometimes tainted sources, including a million dollars from convicted savings & loan swindler Charles Keating, on whose behalf she sent a personal plea for clemency to the presiding judge…she also accepted substantial sums given by the brutal Duvalier dictatorship that regularly stole from the Haitian public treasury.

Parenti continues, saying her hospitals were often nothing more than “human warehouses,” while she personally enjoyed state-of-the-art treatment when sick. He also contends that she fudged numbers of how many poor her services fed, and that during floods and cholera epidemics, her outfit was often nowhere to be found.

Possibly most damning were diaries found several years after her death and fast-track canonization (there is usually a five-year waiting period before investigations into sainthood can begin). Published as Il Segreto di Madre Teresa (Mother Teresa’s Secret), Teresa said:

In my own soul, I feel the terrible pain of this loss. I feel that God does not want me, that God is not God and that he does not really exist.

I’m not sure that this quote in any way suggests or proves she was a money-grubber; instead, it seems that she was human, and had doubts, just like the rest of us. Yet, it still makes you wonder if being an ultimate giver in the time of Hollywood riches and people desperate for a “perfect” savior is a bit impossible. Look, we’ve even turned all those dead saints into huge profits.

Or maybe, it was never possible to be a “true” saint in the first place.

What do you think of our beliefs about sainthood and holiness when it comes to money? Share your thoughts below.

What did you think of this article?
Meh
Good
Awesome
Bookmark
Posted In
Religion Pop Culture