We’re in week three of a nation-wide civil uprising in response to the fraudulent December 27th Presidential elections in Kenya, and among the areas most affected are the slums of Nairobi.

During the President’s immediate inauguration, the people of Kenya took to the streets to fight for justice.

They’re fighting for Raila Odinga, leader of the opposition Orange Democratic Movement, who has successfully won the hearts and minds of the popular masses of Kenya, especially the most marginalised factions of society.

The poor, the unemployed, the landless, the homeless and the youth of Kenya participated whole-heartedly in the elections for the first time in Kenyan history, placing their faith in the democratic process. They believed that if they voted for Raila Odinga, their interests would finally be represented in politics.

But when the election was perceived as stolen, it was the last straw for many, and the protests began.

Evidence of vote rigging was found in virtually every district, on both the government and opposition sides.

Evidence of vote rigging was found in virtually every district, on both the government and opposition sides.

Ballot boxes were stuffed with more votes than voters in certain constituencies; names beginning with A-E were removed from voter’s lists in areas dominated by Luo tribe members, such as the slum of Kibera, as most Luo names begin with such letters.

Incredibly, the opposition leader Raila himself was not even on the registrar.

After the election, it was only a matter of days before the entire country was up in arms. Neighbours who had lived together harmoniously began attacking one another. Members of the Kikuyu tribe have been the most affected. Many Kikuya houses and shops have been looted and burned to the ground, leaving roughly 300,000 people, mostly women and children, displaced in transit refugee camps across the country.

Entire villages have been pillaged, 1500 women have been reported raped and recent counts put the death toll at 700, though it’s known to be swelling higher as each day passes.

And yet despite all the violence and suffering, the opposition movement continues to call for nationwide protests, saying they will not stop until Kibaki steps down. 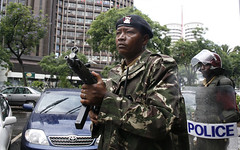 While the poorest of the poor are out in the streets fighting for “justice,” up against heavily armed Kenyan police officers who are notorious for excessive use of force, the political leaders give orders while they sit comfortably behind walled compounds, seemingly unfazed by the bloodshed committed in their names.

Negotiations are failing. South Africa’s Archbishop Desmond Tutu and the African Union and Ghanaian President Kuffuor have both come to help mediate a dialogue between Kibaki and Raila, yet both sides seem unwilling to budge from their positions.

Kibaki will not step down and Raila has said that he will continue to call nationwide protests and encourage actions that cripple Kenya’s economy until Kibaki relinquishes power.

How many lives must be lost, how many people displaced and how many livelihoods ruined before our political leaders step aside from their egos and think about how much their selfish decisions impact the people of Kenya?

Estimates say there will be 500,000 more people unemployed as a result of this post-election violence. In a country with 40% unemployment, you tell me how that’s just.

If the people of Kenya are fighting for change, for a just leader who will help alleviate their poverty, then why are the actions taken to achieve justice exacerbating the suffering and poverty of the very same people who are fighting?

Children in the slums of Kibera, Mathare and Dandora eat tear gas instead of food and can’t go to school.

People can’t go to work and price inflation is rampant. Children in the slums of Kibera, Mathare and Dandora eat tear gas instead of food and can’t go to school; the death toll is rising by the minute with police brutality at its most vicious – officers shooting at random, breaking down innocent slum dwellers’ homes and killing them for no reason other than their geographical location.

The people of Kenya are living in a constant state of fear. For how long can this go on?

While protesters continue chanting “No Raila, No Peace,” it’s very difficult to predict where the future of Kenya lies.

The Road To Reconciliation 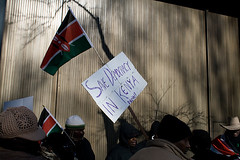 Thinking about what it will take for Kenya to return to a state of normalcy is not easy. The violence and fear will not disappear overnight. A return to stability will require a long process of reconciliation.

The aggression, violence and ethnic cleansing the country has witnessed in the past three weeks are symptoms of years of deep-rooted resentment and frustration. In many ways the current violence is revenge against the historically dominant and affluent Kikuyu people, yet some of the poorest Kenyans are Kikuyu and many of those worst affected by the violence are members of the other 41 tribes in Kenya.

At the end of the day, we are defined by our actions, by our thoughts and by our words – not by our tribe.

Last month a Luo was able to share the traditional maize meal of ugali na sukuma with their Kikuyu neighbour. Today such simple acts of shared humanity may seem impossible.

At the end of the day, we are defined by our actions, by our thoughts and by our words – not by our tribe.

Who we are cannot be classified simply along ethnic lines, because underneath the differences of custom, language, music and geography, all of us are human.

All Kenyans are Kenyan. Kenya is a beautiful country full of talented, energetic people who share a strong sense of brotherhood and sisterhood, whose people have chosen to stand together under the national language of Swahili.

We mustn’t classify this conflict as yet another failed African state immersed in the abyss of tribal conflict. We must look deeper and strive to understand why ethnic, racist and religious conflicts continue to arise.

Why does humanity fear difference and struggle for sameness when homogeneity defies everything that is natural? The beauty of our uniqueness and diversity is what makes us human, and our differences must be cherished.

Perhaps one day we will truly understand the meaning of togetherness, tolerance, acceptance and forgiveness, and realize that what hurts our brothers and sisters hurts us all.

I pray for understanding.

What do you think of the situation in Kenya? Please share your thoughts in the comments

Rehana T is a youth poverty and gender activist, currently working with Carolina for Kibera a youth oriented non-governmental organisation in the Kibera slum of Nairobi. A graduate from the University of Ottawa in Political Science, Rehana is focused on alternative means of education and building youth leadership through theatre and sports.
Tagged
Activism
What did you think of this story?
Meh
Good
Awesome