Postsecret.com is always the place to read about other people’s scandalous thoughts. Recently, they published a postcard about comedian Bill Maher: 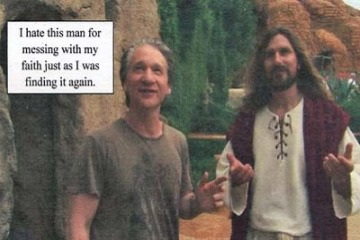 I liked this secret, and i hated it. I felt bad about it because i got the feeling the sender really wanted to re-connect with their faith, and for some reason Maher fucked with it at a crucial point… On the other hand, this person may in fact be able to defy Maher and his oh-so-cynical approach to… everything (not to mention his massive superiority complex) and re-connect with their faith and in the end, they may have a stronger, unwavering relationship with their god.

Similarly, movies such as Jesus Camp, where children are taught to become “dedicated Christian soldiers in God’s Army,” and The Passion of the Christ, Mel Gibson’s adaptation of the crucifixion of Christ, have polarized viewers around the world.

The conversations prompted by these movies show Hollywood’s influence on the public opinion of different religions (I won’t even mention Kabbalah or Scientology, don’t worry).

According to the Pew Forum on Religious and Public Life, in the US:

Less than half of Americans (45%) say the news media is fair in its portrayal of people who share their religious faith. Even fewer (35%) say Hollywood and the entertainment industry are fair in this regard.

And almost half of Californians blame Hollywood for “losing their religion.”

Why are people so affected by what Hollywood has to say? It seems to be how many people learn about other religions and cultures:

The entertainment industry does a particularly terrible job depicting other countries and cultures…the people who say “why are you taking this so seriously?” have been brainwashed to the point where they don’t see why (making fun of other cultures) is wrong…this has been done so much, that people just overlook it.

This made me contemplate the question: are people who immerse themselves in other cultures less influenced by what Hollywood has to say about religion or spirituality?

I wasn’t able to find a good study or even a discussion of this topic, so it’s up to you, dear reader, to say what you think.

Does learning about other cultures, faiths, and people firsthand make a person less influenced by Hollywood’s interpretation of different religions? Share your thoughts below.