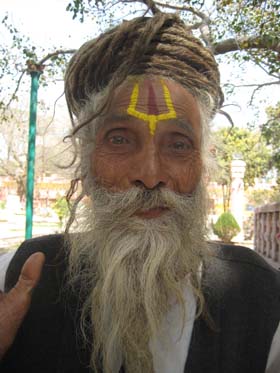 YOU MAY HAVE seen his eyes: whorls of melted brown lit from within. A staple of Indian travelogues. I’d see them and wonder, Who do those eyes belong to? One afternoon, in an ashram library in South Calcutta, amidst the shriek of a bustee, a man approached me with those eyes.

“We have been waiting for you.”

I’d emailed. He said hardly anyone ever came to the ashram. I was an event. It made me feel expansive, being at the center of so much empty space. Vidya, in his tangerine kurta, was empty in a different way: air and silence orbiting around slender bones.

“You come from Manhattan to Calcutta. Why?”

“I have an India addiction.”

Vidya laughed. A young laugh that surprised me, even though he was young. There was a lot of old sadhu in the young sadhu’s face. “What brought you here?” I asked. He told me his story. A story from the same place as his eyes.

He and god were always in cahoots. When he left his parents’ house as a young man, there was no turning back. He wandered along rivers and slept in temples and under trees. When I wandered along the Ganges in Benares, my little house at Krishnamurti was tied to my ankle. My path back to the familiar was always snugly in place.

“For years, I lived without needing people. The silence was all I needed.” (I thought of Lama Govinda’s words: “A stream and cloud life.”) 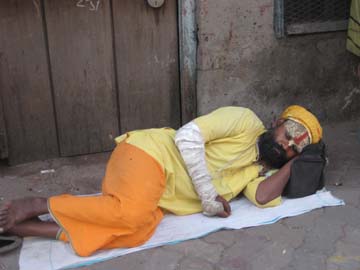 “Then, one day, I got tired of that life. It’s hard on the body. I needed a change. A different kind of spiritual life. I wound up here.”

In charge of an ashram. In the belly of the auditory tsunami of Calcutta. Even streams and clouds sometimes end up in bad places. We became friends. Vidya was my first sadhu friend. I never knew sadhus even had friends.

We spoke a lot about silence. We laughed at the foolishness of all our talk about silence. Our boat leaked with illusions. It was the boat of life, after all. “Do we ever get anywhere on the path, I wonder?” Vidya said.

Sometimes he spoke of leaving Calcutta, returning to the road.

I thought of a man trying to light a match with a shaky hand. What imprinted in me was the movement of his trying. One day, out of the blue, I mentioned that it was hard traveling alone in India, hard being without a woman. It was as if I had pressed an ejector button. 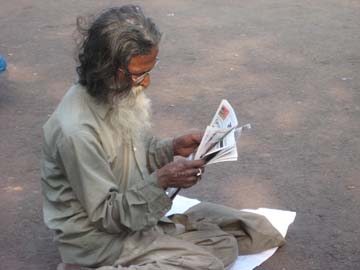 “At the Calcutta Book Fair, I met a woman I fell in love with,” he blurted. “She was not just beautiful, but someone who knew about life, someone you could talk to. I think we must have talked all day.”

“In the end, nothing. She wanted to know what I did, what I planned to do.” He shrugged. The clear brown melt of his eyes turned murky. “She didn’t want anything to do with a poor man in an ashram.”

“There are lots of women in Calcutta.”

“Yes, and they all want what she wants.”

In the suffering light of hyper-polluted Calcutta, we shared the silence of unhappy men.

One of the important aspects of travel is breaking our own stereotypes. What are some that you have broken in your travels?

Tagged
India
What did you think of this story?
Meh
Good
Awesome

This new, glass-domed train will take you on an epic journey through the Rocky Mountains
A time capsule from the north pole just washed up in Ireland
Royal Caribbean is looking for volunteers for ‘simulated cruises’
The truth about artificial vanilla extract (and why you should always splurge for pure)
30 awesome Japanese idioms we should start using in English

Notes from a red-light district, Calcutta

The best and worst toilets in the world

My hometown: A day in Calcutta

Notes on Morning Darkness in Calcutta