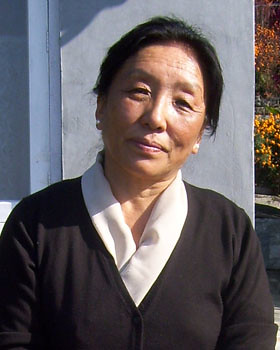 It’s nearly 9:30 am in Macleod Ganj, and I haven’t even had my coffee yet, and for a Canadian, this is a serious predicament. Even the backpackers and the trendy young Tibetans are up by now, enjoying a morning latte at the Malabar café.

I have just woken my driver from sleep with a desperate howl: “Move it! We’re gonna be late!” This hysteria, I think, is mostly unheard of in the temporary home of the Buddhist Tibetan government in exile…how very un-zen of me.

Caffeine crisis and tardiness aside, I am on my way to meet a most remarkable person, Ms. Rinchen Khandu Choegyal, who is rumoured to be the Dalai Llama’s sister-in-law.

I am less concerned with her family ties, however, than I am with the woman she is in her own right. As the first president of the Tibetan Women’s association, with a strong background in activism, she is a role model for people everywhere, and for the Tibetan cause generally.

I arrive at her residence, and within a few minutes, she comes out with a fiery radiance I didn’t expect. I had thought she might be bored with interview questions, or at least as sleepy as me.

After drinking a hot cup of java, I’m awake enough to I know that Ms. Choegyal is just the kind of person that the world needs more of – warm, well-spoken, strong and sincere. For this reason, I take care with her words, because she herself is so concentrated. I want as a journalist, and as someone concerned with Tibet, to get her message right.

We will never give up, and our generations will carry it on”

She begins by providing a brief history of the Tibetan government, and of the difficulties that the Tibetan people continue to grapple with, while nevertheless maintaining a strong community in Dharamsala.

To her, the goal of Tibetans to return to their homeland is a primary issue- in her own words: “We will never give up, and our generations will carry it on”. She projects the determination of a warrior who requires no spears; her voice has weight, without giving away to anger and resentment, even in discussing the Chinese government.

Her views on China are ones of peace and perspective. She makes a vast distinction between regular Chinese people, and the current regime of China, which continues to oppress the idea of a free Tibet.

She defines the Chinese-Tibetan relationship as “a difficult struggle”, but adds, “We don’t want to segregate them”. She strongly promotes international friendship and understanding as a solution to the Tibetan ordeal, which, once over, will benefit all nations, including China itself. 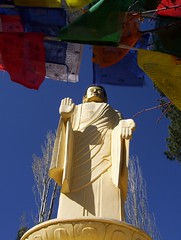 I then ask her about India, and if she thinks it is a good place for Tibetans to live. Her reply of gratitude towards the Indian government, for providing Dharamsala and MacLeod Ganj as a refuge, for “allowing [the Tibetans] to struggle on their own”.

While she views India as a “wonderful place”, she feels it is at the same time important to recognize why Tibetans came to India in the first place. Her greatest wish is for those in exile, to return home, with the resources and freedom to carry on their traditions and beliefs.

At no point in the conversation, does she ever disconnect Tibetan people from the rest of the world. Perhaps this is what I admire most about her.

The goal of Tibetan people, while a fight, is in no way isolated from the rest of the human community, in all its diversity. On an earth, which sees daily outbursts of violence, and where fundamentalism of all strains has become an increasingly common and poor negotiating strategy, one can conclude that our true power comes through understanding and tolerance.

While Choegyal does not define Buddhism as the only way to nurture these qualities, she does suggest that she is “deeply impressed by Buddhism”, and that “it teaches [one] to live happily”. For the children of Tibetan culture, she locates it as “their birthright”, and hopes that they can learn about it, so that they may learn to care about other people.

The goal of Tibetan people, while a fight, is in no way isolated from the rest of the human community, in all its diversity.

She hopes that 3rd generation Tibetans growing up in India, will hold onto their roots, and continue to strive for an independent Tibet so that they may one day go back. While she has great respect for India, emphasizing its cultural, religious, and human ties to Tibet, she says, “Within this, our people have worked very hard”.

Most accurately speaking, after forty plus years in exile, this means we should probably expect more to be happening with Tibet. It’s not that the Tibetans have stopped fighting. Rather, the international community must put more pressure on China, so that they may reconsider their current stance, and return Tibet to its people.

A Time For Pressure 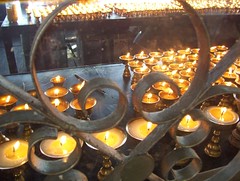 One wonders about the mindset of the international community, which has recently spent more time clapping its hands at the coming Olympics in Beijing, than they have holding the Chinese government responsible for assuring and maintaining human rights.

I am not suggesting that other countries do not violate human rights, or that we should isolate China, however, the voices of the Tibetan people, which speak for peace everywhere, must not only be heard, but listened to.

This requires compassionate action from all ends, and not just sympathy. In the words of the Dalai Llama himself, “To be genuine, compassion must be based on respect for the other, and on the realization that others have the right to be happy and overcome suffering, just like you”.

With this thought, as part of a global force, we might more fully accept the challenge of Tibet’s autonomy.

While many individuals, Tibetan and otherwise, are currently working for justice, the struggle is not yet finished. We must continue to pressure our leaders, for bolder negotiations regarding this issue, and for human rights far and wide.

While the dream of Tibet’s freedom has yet to be fulfilled, this does not mean it is impossible, and the onus is on us all, to make it happen.

Emily Hansen is a travel writer and teacher based in Shimla, India, where she is working on a book about her experiences as an expat. Her native land is Canada, and she has traveled to over 30 countries, and has lived in six, including Germany, China, Korea, Thailand, Taiwan, and now, India.
What did you think of this article?
Meh
Good
Awesome
Bookmark
Posted In
Activism Interviews
Destinations
Tibet

My quest is to see all species of wild cats in their natural habitat. Here’s what I saw in Tibet.

More and more Tibetans are lighting themselves on fire. Here’s why

Alexandra David-Néel: The prima donna who snuck into Tibet in 1912 to meet the Dalai Lama

On the creeping commoditization of Tibet

Life on the Tibetan border [pics]

27 of the deepest canyons you can explore [PICs]