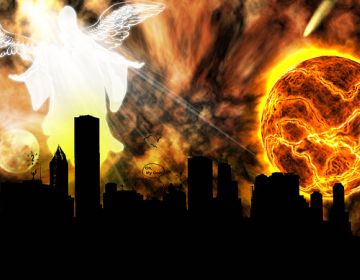 Questions, debates, and arguments tend to flow non-stop from our media about such loving and easy topics as the war in Afghanistan, global warming, and Tiger Wood’s affair(s).

I’ve felt particularly pulled from end of the spectrum to the other over the past couple of days. One of Matador’s writers, Nick Rowlands, passed along an interesting, albeit extraordinarily we’re-going-straight-down-the-tubage, debate between George Monbiot, author of several investigative travel books and a weekly column for the Guardian, and Paul Kingsnorth, director of the Dark Mountain Project.

In the letter exchange, well worth reading by the way, Kingsnorth takes the “shits already hit the fan, let’s get on with this apocalypse now and start over” approach. He discusses a set of graphs that marks the steady rise of a wide range of occurrences since 1750, including the rising CO2 concentration in the atmosphere and rate of species extinction, and how they suddenly “veer steeply upwards” since – you guessed it – 1950:

Yet very few of us are prepared to look honestly at the message this reality is screaming at us: that the civilisation we are a part of is hitting the buffers at full speed, and it is too late to stop it. Instead, most of us – and I include in this generalisation much of the mainstream environmental movement – are still wedded to a vision of the future as an upgraded version of the present.

Monbiot, while identifying with the fact that we are in a precarious situation, believes that we have to go on fighting the good fight. If we don’t, instead of the emergence of an utopian society, we (well, those of us left, anyway) would be in an even uglier place than at the moment:

I’m sure we can agree that the immediate consequences of collapse would be hideous: the breakdown of the systems that keep most of us alive; mass starvation; war…the survivors of this collapse will be subject to the will of people seeking to monopolise remaining resources. This will is likely to be imposed through violence. Political accountability will be a distant memory. The chances of conserving any resource in these circumstances are approximately zero.

Monbiot ends one of his letters with this: “Perhaps we are both in denial: I because I think the fight is still worth having; you because you think it isn’t.”

Whew, intense. I certainly felt compelled by the certainty of both men that no matter which way we turn, things aren’t going to be pretty.

Or Could They Be? 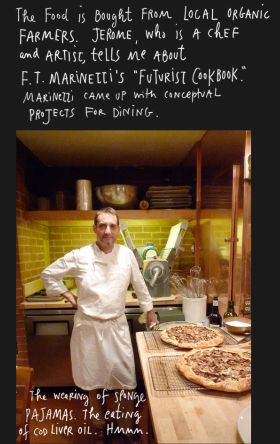 And then, lo and behold, a friend sent along this piece by Maira Kalman at the New York Times blog. Beautifully illustrated through pictures and actual written words (ok, maybe it’s a writing font), Maira looks to how our land, eating habits, and movement have changed greatly – and negatively – since our “founding fathers” stepped foot in the US.

Yet there is this undercurrent that – dare I say it, is beginning to overflow – of people not only understanding our need to return to the Earth, but who are actually doing it.

It is not about dropping out (though that sounds tempting now and then). It is about bringing elemental things to the present time with commerce and optimism.

In “not dropping out,” she doesn’t forget to ask the questions. On the picture of a cow, she wonders, “Land of cows that we eat. Should we? Shouldn’t we?” And in showing children in Berkeley, CA growing, preparing, and eating organic meals together at school, she poses, “Many children often do not sit with their own families. And some drink soda for breakfast. So what do we do about that?”

Even if we are working in our own lives to make changes, I think that forgetting, or dismissing, the reality of what is happening outside of the confines of our own world is a huge part of the problem. Positivity is a beautiful thing, as long as it doesn’t negate the realities of others.

Yes, we create our own reality, to a certain extent. Yet each of our realities runs up against everyone else’s. That means chemicals being dumped, wars being fought, and food being frankened effects you. But don’t forget to check yourself on negating the positive realities of things happening around you, too.

So then what is the answer – watch and even hope for the apocalypse? Fight it tool and nail? Look at the bright side? Maybe, just maybe, the answer is somewhere in the middle.

What do you believe is the answer to our survival conundrum? Share your thoughts below.