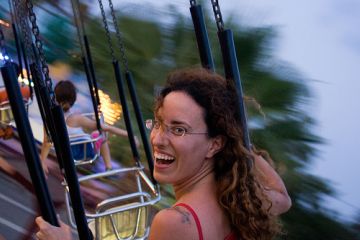 Well, according to a recent Forbes article, overall economic health plays a key role in determining who are the happiest people on Earth.

The Organization for Economic Co-Operation and Development (OECD) released a report about the hows and why of the world’s happiest places.

Denmark, Finland and the Netherlands found their way to the top. Apparently, these countries have been hit the least by the economic downturn: there is low unemployment, a good work-life balance, yadi yadi yada.

I have a different hypothesis.

The Joy Of The Ride

I think happiness might have a little something to do with how often you go to one of Cracked.com’s world’s most baffling theme parks.

Think about it: you’ve got Diggerland in four UK locations for all those unlucky enough to not have climbed aboard John Deere tractors at the State Fair in Kansas; New York City’s not-yet-fully-developed Nintendo Amusement Park, where men can remain little boys forever; and who needs the Bodhi tree in Bodhgaya when you can ride go-karts AND rub the Buddha’s belly all in one place at Vietnam’s Suoi Tien Cultural Amusement Park? 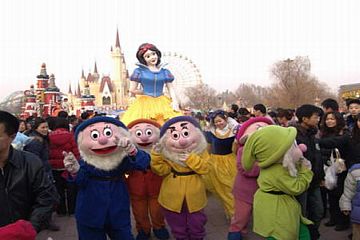 Plus, I can really get tired of those boring old Disney characters.

So thank God the characters at Beijing Shijingshan Amusement Park are, according to park officials, definitely NOT based on anything remotely Disney (see picture).

The REAL Happiest Place On Earth

But without a doubt, the happiest place on Earth must be South Korea’s Jeju Love Land (well, for the over-18 crowd, at least).

This park boasts (literally) a giant stone penis, statues of sex positions I’ve never seen before, and naturally, a gift shop. For some NSFW pictures of some of the sculptures, check out My[confined]Space.

So popular is Love Land that they decided to become a chain. And what place did it seem to make most sense to open the next sex park? China, duh.

Sadly, readers, just as I was booking my ticket to Love Land’s October opening in Chongqing, I learned it has been demolished. Seems some Chinese officials thought the park was “vulgar, ill-minded and misleading.” Luckily, I believe the original in Korea will keep going for a long, long, LONG time.

Well, I guess I might have to settle on heading over to Denmark’s Bon Bon Land and enjoying the wind on the Hundeprutterutchebane, otherwise known as the Dog-Fart-Switchback.

Hmmm, maybe happiness IS about economic health. You’ve got to be reasonably comfortable monetarily in order to get into these theme parks, right?

Can you find happiness in a theme park? Share your thoughts below.

21 drinking games you can play in any bar
Why does ‘yellow filter’ keep popping up in American movies?
Welcome to Parc Astérix, the quirky French theme park tourists always miss
The best island in the Caribbean for every type of traveler
15 creamy, fruity, and indulgent ice cream styles from around the world