WITHIN A FEW MINUTES of arriving at the ancient cedar forest in Bcharre, Lebanon, I noticed them — a couple making out by the trees. Not hiding, either, just kissing. Hugging and taking each other’s photos; smiling at each other in that we’re-in-love sort of way.

I was a little uncomfortable since I’d recently been through a breakup. Although I was mostly over it, seeing them was an unwelcome reminder of the still-fresh pain. Figuring some space would be good, I hiked to another corner of the forest, then sat against a large cedar tree and breathed the cool mountain air. I was alone again, but in a better place.

I reflected on the last few hectic days, in which I’d traveled from Amman to Damascus to Beirut and then finally to Bcharre, the birthplace of Khalil Gibran. Earlier, Carlos, a handsome local who owned an ice cream parlor, kindly offered to drive me to the forest. I accepted.

Carlos told me about his divorce and I told him about my breakup; we connected in our mutual empathy.

He turned on the CD player. Engelbert Humperdinck was singing a romantic song. Carlos told me about his divorce and I told him about my breakup; we connected in our mutual empathy. I was grateful to have made friends with him.

Lost in my thoughts about Carlos and his generosity, I almost forgot where I was — under a cedar tree in an ancient forest in the Qadisha Valley of Lebanon. I took a deep breath and closed my eyes. When I opened them, the couple was back in my line of sight.

The kissing continued. I began wondering if they were a new couple — perhaps newlyweds. “Hi there. Would you like me to take some photos of you”? I finally said. I sort of liked the fact that they didn’t ask me.

“Would you really?” the woman said. “We would appreciate that so much. We just got married and are on our honeymoon! You are so kind to offer this,” she continued. “Thank you!”

I didn’t think I was doing that much, but to them it was a lot. It meant something. Perhaps it was the same for Carlos when he helped me? I smiled, took their camera, and began to shoot. I then did the same with my camera. 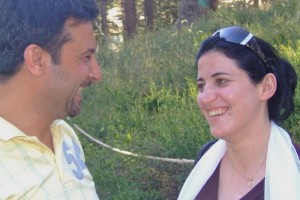 When the man walked away to chat with someone at the nearby restaurant, his new wife told me the story of their romance. She’d been engaged a few times, but broke up each time because something just wasn’t right. It only took six months for them to get engaged and married.

“How are you getting back down into town?” they asked after he returned. The sun was setting and I was beginning to wonder the same thing myself. I had no car and no phone number for a taxi service. I was considering hitchhiking back.

“Not sure,” I said. I secretly hoped they would offer, but I didn’t want to ask. “Well, you’re coming with us,” the wife said. The husband nodded in agreement. I felt relieved. It seemed that everything had happened just as it was meant to. There was something about them that put me at ease. And seeing them so right together helped me see what was wrong with the situation I’d been in.

We walked around the park for a while, then wandered over to the gift shop and checked out the mini cedar tree souvenirs for sale. They bought several. “You should get one — to remember this special place,” the wife said.

I bought a small one that resembled some of the trees I’d sat near.