“Every joke,” according to my wife, “has an element of joke in it.” The first time I heard it, I figured she’d confused the idea. Her take on English can be quite original sometimes. “You mean, an element of truth,” I said, correcting her gently.

“No, an element of joke,” she replied, enduring me patiently.

I’ve long since come over to her side. At the base of every joke is a spring-loaded truth, a hidden reality that gives them their punch. When a truth suddenly bursts up, we laugh at the unexpected BOING it makes. After the glow of humor fades, the unmasked truth grows familiar, and the joy is now in the telling – in offering the surprise to others.

There’s an old one-liner whose element of joke burnt out long ago:

At first glance, there doesn’t seem much truth to look for here, and the joke is mainly on the listener in their hopes for a reasonable answer. But this is what secretly baits the hook (and coils the spring): it’s a maddening question. Why would anyone climb a mountain? Has anyone ever come up with a reason even remotely satisfying?

The man who came up with this remark didn’t find it very satisfying, either. George Mallory was a member of three expeditions attempting to scale Mount Everest; despite great danger and the loss of several companions, he and others persisted. It is unknown if he ever reached the peak; his body was found in 1999, 75 years after disappearing on the northeast ridge.

Why would anyone climb a mountain? Has anyone ever come up with a reason even remotely satisfying?

When repeatedly asked by reporters why the near-impossible assent was necessary to him, Mallory didn’t even remember giving his now famous reply, a dismissal of a question he considered foolish:

Most of us engage in some beloved brand of risk – but the reasons why are inexplicable. If climbing Everest seems rash mainly due to excessive risk without apparent return, then adventure itself is suspect.

You may as well ask, “Why did the traveler go to Rome during peak season?” Or even, “Why leave the house at all?” Or, “Why live, if you can be hurt?” Why bother? Why risk?

Risk isn’t comfortable. It’s difficult, exhausting, unpleasant and, in some cases, downright messy. As a financial investment, adventure ranks at the bottom of the list. Its reward has no trade value; its promise is unreliable.

For someone who doesn’t understand the need, there is no sufficient answer. Adventure can’t always be rationalized, because adventure is irrational without visible profit.

Focus On The Journey 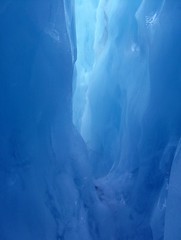 The spirit of adventure is an exercise in curiosity beyond material gain – the real prize isn’t simply to reach the goal, but to participate in the experience.

For an adventurer, the reason for the pursuit is self-evident: there is no other way. Because it is there.

Adventure presents a gate to an experience beyond our own, something that cannot be quoted or relayed by another. It must be done to be known.

The real intent of risk is to grow – to put an adventurer in contact with their limitations to exceed them. How may I cross through the gate? What experience is there waiting? Who am I on the other side?

What conceals a joke is in taking something for granted too quickly. In this case, it’s assuming that happiness is the same as repose. When happiness is defined as “freedom from difficulty,” any effort is seen as an enemy; however small, need must be stifled or distracted to maintain this version of “happiness.”

As a result, many people spend their lives in this “pursuit of happiness” which more often resembles an “escape of comfort.”

When the product takes the place of the process, we exist merely to have instead of to live. It’s a shift from “I want something to eat” to “I want perpetual contentment – never to feel hunger again.” Seen thus, any desire is backward and unnecessary. The confusion caused by this attitude has not only led to a society of detached existence, but threatens to exhaust global resources in unrestrained consumption.

It may be that this outlook is a bigger joke than the first, but even less funny.

To Live Or To Exist

When destination takes more emphasis than the journey, it must be recognized that the destination doesn’t wholly exist.

It’s only a vista to look back upon the real source of meaning – the experience of the journey. In the same regard, happiness is a process that doesn’t reject, but rather embraces need. Though it may be at a great distance, or even a sheer vertical ascent, happiness can’t be sought for directly.

It comes as a secondary result of finding meaning in the endeavor itself. The art of adventure – of life itself – seems to rest in the mediating acts of personal expression that compose it. It’s less the arrival, more the movement within – choosing risks that best apply to who we are.

It’s a sentiment Mallory demonstrated in his own life; in an article regarding a recent Alpine climb, he asked the question, “Have we vanquished an enemy?” His answer: “None but ourselves.” This is the truth behind the joke.

I’m constantly amazed by what my wife can teach me: sometimes by way of a joke, or by what shines through prisms of culture and her own nature. I’m learning it’s much easier to simply agree with her on most things – it’s not so arduous a climb that way.

I’m finally starting to get it.

F. Daniel Harbecke (just call him Daniel, the F’s a family thing) is currently working on “A Philosophy of Travel,” which envisions travel as a metaphor for the meaningful experience of life. Daniel has lived in Europe, South America and Asia and is trying to fund his tony lifestyle in Sweet Home Chicago.
What did you think of this article?
Meh
Good
Awesome
Bookmark
Posted In
Meditation + Spirituality