After three years in New York, it was time to break myself of my unhealthy fixation on the sad, young literary men of New York, the ones who claimed to identify with George Plimpton and Ernest Hemingway to compensate for a modern world that had utterly castrated them.

Because of the abundance of beautiful women at their fingertips, these guys seemed to feel entitled to treat me like just another dish on the Sunday brunch menu–usually the one sitting limp and uneaten under the heat lamp.

So I saved my money, went to Tierra del Fuego, down at the bottom of the world, and boarded a three-masted schooner to learn to sail. I figured that, when the trip ended two months later in the Azores, I was bound to have learned at least one useful skill. Maybe I could actually contribute something to the world rather than be a drain on its natural resources and Internet bandwidth.

Plus, it seemed likely that I might meet some guys who actually knew how to, you know, DO something, instead of just write about it. I’d knew there had to be some of those left — never met any, but I’d heard stories.

My plan worked better, and faster, than I could have possibly imagined. I was one of two single women in a crew of twenty, and Sailor Boy, 21, had shoulders you could crack a two-by-four on.

“Make way for the beautiful lady,” he said, ushering me forward as he lined everybody up to show me and some other amateurs how to belay a rope. Melt.

Sailor Boy, born and raised outside Amsterdam, was like some unholy Real American mashup, a State U frat bro meets surf rat, in his liquor-logo T-shirts and the trucker hats that he would slam on backward over his shaggy sun-bleached hair, his accent like The Hague-meets-San Dimas. He shimmered like phosphorescence shining up from the fathoms; like cool ocean water down my back. I mean, I knew the odds would be good, but I didn’t think the goods would be so… good.

Hearing I was a writer, he came up to me the first day of the trip, as we were motoring out of the harbor, and asked me to edit something he had written–written! In English! Oh, lord. Not only was he hot, and a preternaturally gifted sailor, he was smart.

“He sees things about the ship,” the captain told me. “Things I could never see. He could make captain in five years–if every single sailor in the universe doesn’t hate his guts by then.”

I soon saw why. Sailor Boy’s masterwork was manifesto on proper trash disposal, a job he’d gotten stuck with by light of his youth and inexperience, along with scrubbing toilets and pumping them out when they overflowed with shit. He may have been brilliant, but the crew was making him earn his keep.

Of course, he was smart enough to know he was too smart for that, so naturally, he hated it. He cracked the metaphorical whip on the easiest target–me. He’d play the part of the petty martinet, enlisting me to do his his job of sorting trash, or chewing me out for dripping brass polish all over the saloon, then make me spend the afternoon cleaning it up. Then, as if to make it up to me, he’d switch his trucker hat with my furry one, or joke to his fellow deckhands about that sunscreen dripping between my legs (I did mention he was only 21, right?). He called me a mermaid and served me dessert first, always, in between, trying to impress me by misusing ten-dollar English words and asking me what I was reading on my Nook.

“I don’t think that word means what you think it means,” I said.

“Don’t be silly, Claire,” he said, not missing a beat. “Of course it does. By the way, have you cut up those tin cans yet?”

“How come you don’t have any tattoos?” I asked him once late one night after watch, sitting side by side in saloon one of his few free moments. He even made me cup of tea. “You’re a sailor!”

“Well, I don’t really come from a tattoo kind of family,” he said. “We are actually descended from Spanish royalty. It’s true. My aunt read it on the Internet.”

“Well, I think you should get one,” I said, hiding a smile at the poor kid’s idle vanity, touching the inside of his arm. “Of a mermaid. Right here.” 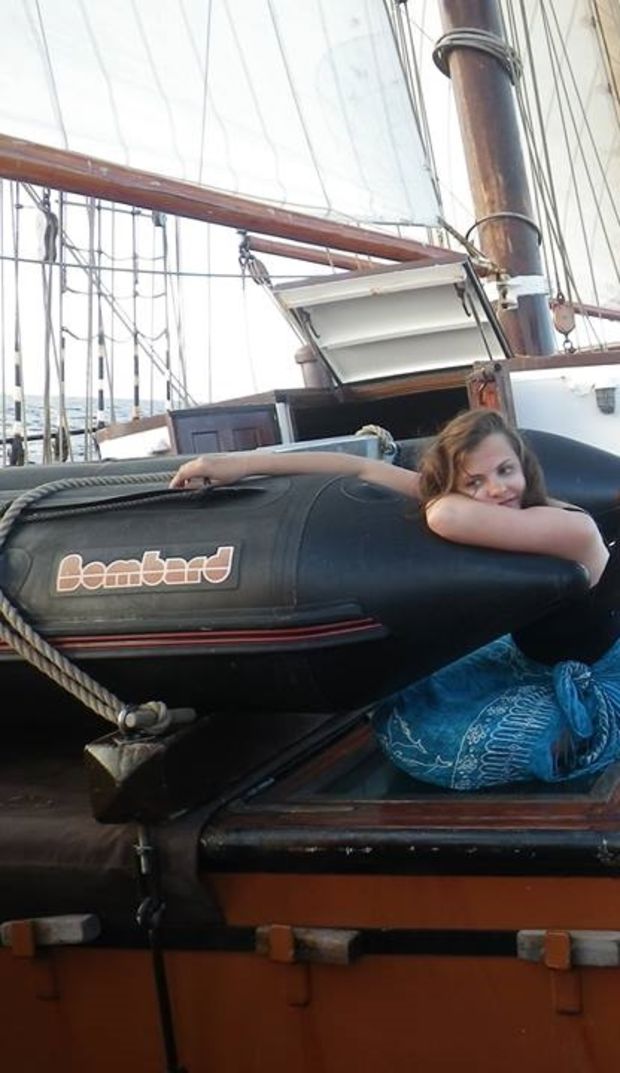 Onboard the three-masted schooner where I learned to sail. Photo by the author.

It was around this time that Oh Captain, My Captain put his oar in. Rangy, taut, fiftyish, and utterly self-possessed, he’d seen the entire world, and also had the authority to make me do anything–which is exactly why he didn’t have to. Instead, he brought me coffee and soda and sat in the wheelhouse with me for hours on end, chain-smoking and teaching me how to test the direction of the wind. He told me stories about Greenland, and about tending bar in the Canaries during the era when house music was born. He accepted that I was useless but was trying not to be, and he became my refuge. Oh Captain even took pleasure in setting up a makeshift pool on deck and splashing around with my bikini-clad self while Sailor Boy toiled away nearby.

Sitting at the dinner table, watching the plates slide back and forth across the table while playing these two off each other was hilarious, frustrating, and the best way I’ve found yet to improve my self esteem after three years in a New York dating scene that shredded me like Parmesan cheese. It was almost as good at watching the two of them argue, in the middle of a kicked up gale, about the best time to reef the jib, a frequent dust-up that only served to underscore their barely-concealed lust for each other (or so I liked to imagine, but maybe that’s because I read a lot of slash fanfic).

“Eh, he’s the worst captain I’ve ever had,” Sailor Boy insisted on our first trip to shore in a month. We were romping down the beach on Ascension Island at sunrise, like two idiots in an eHarmony ad, looking for sea turtles laying their eggs in the sand. He stuck a cigarette behind his ear, borrowed from you know who. On the beach, in port, he could be free. I was pretty sure Oh Captain My Captain had straight up propositioned me earlier, but Sailor Boy knew there was no rush. He only drew his arm around my waist casually, holding me close for a second before breaking away. For the moment, it was more than enough.

I know that there were more than few nights when he went below decks and made off-color comments about me to his bunkmates before drifting off to his well-deserved sleep. Degrading? Maybe. But I’d be lying if I said it didn’t it felt good to be talked about by twenty guys rather than surrounded by two million guys not saying a word.

Our last night, after leaving the pub, Sailor Boy took me back on the ship and kissed me for the first time. “Meet me on the foredeck,” he whispered, his eyes darting around to make sure none of our fellow crew had heard–not like they weren’t on to us. We climbed down a ladder, one at a time, to have quick, dirty sex in the paint room, with metal chains and cans like a torture dungeon. “Sorry this isn’t more romantic,” he whispered.

“You’ve got a lot to learn about romance, kid,” I said. Or maybe I just imagined saying that.

“I’m very proud of you, Claire,” he said to my back as I walked away the next morning, before running up to the highest hill in Horta and pulling a Pocahontas, waving as the ship pulled out of the harbor and disappeared in the misty horizon. Sailor Boy was under the thumb of a new captain, with plans to finally enroll in college next fall, and I was alone.

And then next night, Oh Captain My Captain met me at the pub again. I invited him back to my guesthouse, and on a subtropical island in the middle of the North Atlantic, he showed what three extra decades of experience were worth. 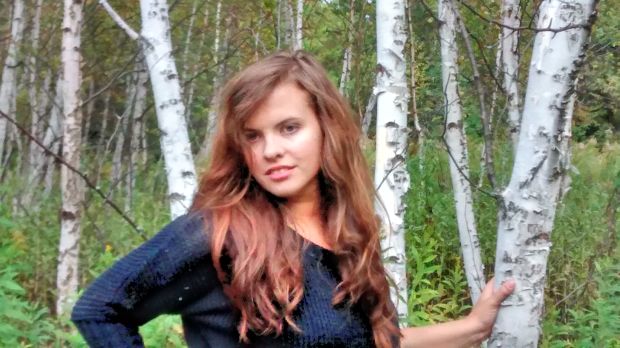 I’m back where I started now, but I’m so glad I went. Photo by the author.

This was more than just a self-esteem boost, even though obviously it was. I’m back home in Minnesota now, writing, still struggling with the shape the rest of my life will take. But at least now I know that the world is still making beautiful things — and I don’t just mean the albatrosses, or the pods of hourglass dolphins that raced the bow.

I highly recommend it.

This article originally appeared on xoJane.com and is republished here with permission.

Tagged
Narrative Couples
What did you think of this story?
Meh
Good
Awesome