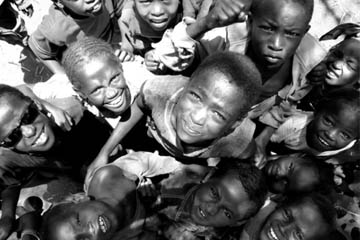 It can get a little intense. / Photo Robin Esrock

I wake up to the sound of a women screaming in sexual climax.

Unfortunately, she’s not in my room, but rather, in the room next to mine, although with the cardboard walls she may as well be lying in my bed. A cockroach runs across the floor. It’s 6am.

The plane from Lalibela made it back to Addis late last night, a few hours late, not bad considering what it took for us to get there. I had hoped to check my email, but the email is down at the hotel.

After decades of brutal communist rule, in which thousands were murdered and starvation was used as a political weapon, the current left-wing liberator is conforming to the typical pattern of African rule – when power comes, so does corruption.

The most recent elections were declared a farce by UN observers. Most people voted for the opposition. The opposition lost. Sounds like the U.S, in a way.

These are the things I’m thinking about, while the woman continues to scream, a different kind of rooster, a cock will doodle doo.

It will take three days by Land Cruiser to the Lower Omo Valley, one of the most culturally diverse regions on the planet. 53 nations live in Southern Ethiopia, most with unique customs and traditions, as different from western life as whales are to shitsus.

53 nations live in Southern Ethiopia, most with unique customs and traditions, as different from western life as whales are to shitsus.

It takes some time to navigate out of Addis, stuck behind trucks and buses puking thick black smoke directly into the back of our throats. There are cows in the middle of the road, herds of goats, overloaded donkeys.

Children run in front of the car, and before long, we see the first of many road kill, a donkey, split in half in the middle of the road.

Our driver Ayalew honks repeatedly, at animals and people – the road is an obstacle course requiring absolute concentration. Bob Marley on the iPod, we leave the city behind, the lanes become narrower, but the countryside is lush with all the shades of green from the rainy season.

After a few hours, the asphalt disappears into a strip of never-ending craters. Tin shacks become mud houses become wooden huts with thatch ceilings. Small towns are crowded with people and livestock. Kids play ping pong and foozball under the shade of trees.

Shacks sell everything, and the only building that looks like it’s from this century belongs to the ominously sounding Ethiopian Insurance Corporation.

Hand painted street signs show donkey carts, and celebrate” Happy Millennium”, and show a dead baby, and the only word I can recognize is AIDS. Ethiopian writing is all dashes and squiggles, with English words appearing occasionally and usually misspelt.

After 250km, we drive through Shashamane, welcomed by a hand painted billboard of Bob Marley. Rasta colours are prominent, as are tall foreign men, their dreadlocks towering over locals. 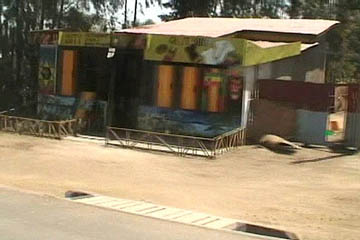 Each kilometre along the bone shaking, acacia-tree lined dirt road seems to wipe another century off humanity’s recent progress.

No glass, no cement, no electricity, or phones, or wide screen TV’s. No tennis courts and swimming pools, no basements, no driveways, nor cars to drive them. No windows or patios, or dishwashers and washing machines.

Forget about laptops, battery-powered toothbrushes, mattresses, linen, or bathtubs. Throw out the microwave, blenders, desks, cabinets and sofas. Here we are exactly how we were, before words like Globalization, or the Renaissance, or the Industrial Revolution, or Cyberspace.

Living in round huts, working fields during the day, sleeping around a fire in the dark, using wooden headrests as pillows, on a bed of thin, dried animal skin.

Then a mosque, with a single minaret, and the huts have a crescent symbol above. After the Eastern Orthodox Church, Islam is the country’s second religion, and unlike the civil war in neighbouring Sudan, Christians and Muslims live in peace.

The purpose of the road trip is to visit tribes along Ethiopia’s Rift Valley, and the Alaba, would be the first.

The Land Cruiser pulls up, and immediately we are surrounded by desperate, impoverished looking people. Children are wearing western style clothes that resemble rags, torn and filthy. Hands are out. I feel sick to my stomach, and so it begins.

The fact that you are expected to pay money to locals for photographs has hideously backfired in Ethiopia.

However right, moral and well intentioned, the fact that you are expected to pay money to locals for photographs has hideously backfired in Ethiopia.

I see nothing wrong with remunerating someone who appears in my photographs. It’s only fair to reward them for the right to capture their image. The problem is that it has become a business in this country, encouraging desperate people to appear in tourist photos as a means of making easy money.

When I take pictures of people in foreign countries, I aim to capture an image that speaks, ( a thousand words?) about life, and the people who live it. It is never the intention to manipulate people, or take photos of them without their permission.

I look for the authentic, the real, the moment.

So consider the impact of a mob demanding I take their photo, and pay up seconds after I do. Gone are the moments of people being people, replaced by people doing whatever it is that will get foreigners to pull out their cameras, and their wallet.

It’s undeniable exploitation, by both parties, and the result left me taking timeless pictures with an accompanying memory I’d rather forget altogether.

One of many examples: We stop to join a group of locals on a donkey cart on the side of a highway. I ask first for permission, and then how much it will cost for the fare. I am told 20 birr.

Julia and get on the cart and the poor donkey heaves on, a few pictures are taken. People are laughing and smiling and I feel generous so I pull out a 50 birr note (about $5).

What ensued was a pushing match, the group turning on each other, demanding more money, grabbing me from all directions, literally ripping the money out of my hands. I was threatened, shoved, and had to run for the safety of the car. All because I wanted a photo, for which I was prepared to overpay the agreed price by more than double!

How could it not taint an experience? As one guy told me in Jinka:

“The money makes everybody go crazy!”

“All they know of ferengis is of NGO’s and tourists,” Da Witt, tells me over coffee in Addis.

He’s a local nutritionist who works for an NGO. Like our guides and drivers, he laughs off the Ferengi Frenzy, as it is called, but there is little doubt it has left a negative impact on our team.

Unfortunately, if you’re a tourist in town for two weeks and plan on visiting locations suggested by a tour agency, chances are you won’t see it.

I needed to find a way break through, and while music may be the international language, football trails a close second. We stop in a town and I buy a soccer ball. 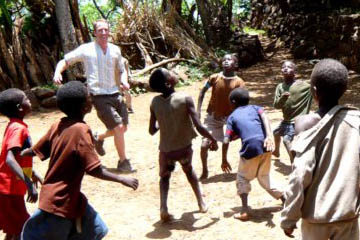 After the game, I donated the ball. / Photo Robin Esrock

For the Konso people, well known for their agricultural terraces, I wanted to break the cage of the human zoo. Right away, things were different. Tourists pay a fee up front and get a local guide, who told me that the money is split with the tribe.

Although children flooded us with their familiar hands out, our local guide named Chu Chu kept them in line. He explained the significance of tribal walls, how unmarried men live together and serve the community, how trees are used to determine the age of the village.

At last I was learning something, and then I pulled out the soccer ball, and learnt a whole lot more. Whether I was merely distracting the kids or tapped into a desire to genuinely interact with a strange ferengi, we chose sides, played some soccer, and had some fun.

Whether I’m deluding myself or seeing the truth, for a half hour I wasn’t a human handout, just a traveller in a strange land trying to connect.

Next Chu Chu showed me a traditional game called grayka, involving a piece of wood and a lot of jumping (the jump being my forte), and soon everyone was in on the act. It was only once we began to make our way to the car that the frenzy took hold again, the calls for money, or “Highland” – empty bottles of packaged water.

I tipped Chu Chu well, he responded with genuine sincerity, and I left feeling a little better about the way things could be. It’s a catch-22 in any country.

Tourists want to interact with indigenous locals, but the process of interaction changes the way locals live, and in the end, what you get is the extreme dysfunction of the Mursi Tribe.

Next Week: Show me some Mursi