YOU ARE SITTING in a European sidewalk café. You overhear the word, Bush.

What’s next? Furrowed brows and incredulous questions? Whether or not you think our president deserves this disrespect, you’ve likely encountered it.

Between now and the election, fellow European travelers, we can cram hope in our suitcases right next to optimism.

I just returned from Europe, barely missing the president’s farewell tour. Before departing, President Bush stood on the White House lawn and declared, “We’ve got strong relations in Europe and this trip will help solidify those relations.”

FOX News reports, “Europeans feel US foreign policy will be better once he’s gone, and they’re already looking past him to his successor.”

Before reflecting on my own experience and what Europeans have to say about the tour, I think back to the highlights of yesteryear.

A Brief History Of Bush Protest

London, 2004: Bush was in the role of enemy. I saw furious protestors gathered outside the British Parliament, waving anti-Bush signs. Millions of people all over Europe had done the same. Throughout England and Scotland I was asked suspiciously, “Will Bush get re-elected?”

“There has always been disbelief that we could have elected him twice.”

Paris, 2005: Everyone from the hotel concierge to the sophisticated executive courteously demanded (as only the French can), “How could your country re-elect Bush?”

Wendy Hendrickson, a teacher and entrepreneur living in Vienna who voted for Bush still hears the same question today. “There has always been disbelief that we could have elected him twice.”

Italy, 2006: Denise and Cid Busby of Edmonds, Washington lived in Naples and traveled extensively around Europe. “We had many instances when people in all different countries of Europe immediately started in on George Bush: ‘He is a very bad man. He is not very smart. Why would you elect him?” ‘We just started saying we were from Canada. We felt so sad.”

Bordeaux, 2007: I could see the taxi driver’s face in the rearview mirror. The radio announcer was interviewing French people about Le Président Des Etats-Unis, and guerre (war). The driver’s eyes scanned mine for comprehension; I gazed out at the vineyards and chateaux.

“Boosh was dangereux and un tartufe (hypocrite). Eyes sparkled, the moustache twitched, and the driver chuckled discretely. The war was ridicule, inutile (unnecessary); about pétrole and la avidité (greed).”

Belly laughs boomed from the front seat. I leaned forward and asked the man in French if he liked the US President. He gave a horrified start and nearly wept with embarrassment, exuding sympathy for me. 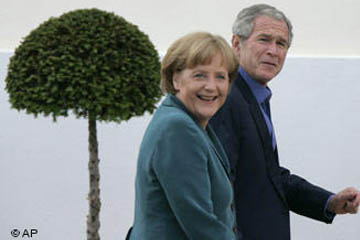 Back to 2008: The Boston Globe said last week, “President Bush’s motorcade will speed through European capitals, but for many Europeans, the Bush presidency already is in their rearview mirrors. ”

BBC News says, “Judging from the level of public antipathy towards Bush in Europe, perhaps â€˜Good Riddance’ would be the more accurate message.”

Slovenia’s news source Delo says: “After eight years of George W. Bush, who embodied all the negative stereotypes and prejudices regarding the US, everyone wants a new American president.” The Slovene word for goodbye is Nasvidenje.

In Germany, our commander-in-chief threw his arm around the shoulder of Chancellor Angela Merkel, causing Europeans to recall July 18, 2006. Bush told Germans, “I could have used better rhetoric.” Will Germans ever again pine for war rhetoric? Nein.

They half-heartedly wished the president Auf Wiedersehen. Der Tagesspiegel newspaper: “Bush is not even popular in the role of the enemy anymore.”

I Googled French news for their take on the president’s visit, and déjÃ  vu! Radio France’s announcer once again interviewed people. “A man who takes himself to be a god.” “Monsieur Boosh should go.”

Aerospace executive John Byrne was in Italy last week when Italians bid Bush Arrivederci. He said, “They want Bush out.” Hendrickson says Austrians echo this sentiment. “I haven’t met an Austrian yet who doesn’t think getting Bush out of office will do the United States a world of good. They seem concerned about our loss of stature in the eyes of the world.”

“The attention is now on Obama and McCain,” says Antonio Missiroli, research director of the European Policy Centre in Brussels.

I found this to be true on my recent trip to Europe. After a terse comment on Bush’s sanity, Anne, a Parisian historian smiled. A window was flung open and a gust of fresh air blew in: “You will have a new president soon, yes?”

In Vienna my tour guide informed me, “We in the EU have to work out our differences. We don’t just bomb people”. Then-whoosh-“Maybe your new president will try diplomacy.”

Looking To The Future

Steven Kull, director of The Program on International Policy Attitudes comments, “Views of the US are being mitigated by hope that a new administration will move away from the foreign policies that have been so unpopular around the world.”

The Slovenian news indicates that this open window hinges on prospects for diplomacy: “If a candidate who wants to adhere to Bush’s course wins, the transatlantic rift will only grow deeper.”

Which candidate will have a longer shelf-life in Europe? I searched both John McCain and Barack Obama’s websites under Issues for their positions on foreign policy, looking for specific references to diplomacy. I urge you to do the same.

This summer, I’ll travel to England after the Brits cry, Cheerio. We’ll have tea and chat about hope. Then it’s off to Ireland, who wished the Bush SlÃ¡n leat. I’ll lift a Guinness with the Irish and toast to diplomacy.

What do you think of Europe’s reaction to Bush’s farewell? Share your thoughts in the comments!