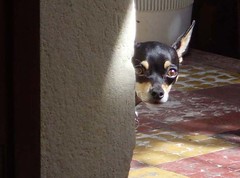 In his short life, my dog Norman (a.k.a. “Norm”) has marked his territory in two foreign countries and almost all the states east of the Mississippi.

He recently flew back from Guatemala and looks forward to a bit of a rest before his next journey. Right now, he is sniffing a cat’s butt.

The first question many people ask about Norm is how we manage to travel with him. Certainly his size assists in this process, but many people are curious as to how to prepare to take a pet on the road. There seems to be a self-defeatist attitude about traveling with pets, whether it is the cost of care or the bureaucracy involved with crossing borders.

On the road, I’ve found people seemed more eager to share stories of the furry “baby” they left behind, then of their children or grandchildren. Deep down, I think this proves that the average person would rather take their dog traveling than their kids.

Here are some tips, facts, and myths about getting from point ‘A’, to point ‘B’ with your pet.

Everything you do with regard to travel and your pet will begin with a licensed veterinarian. Your life will be much easier if you know this person and they know your pet. Get them a Christmas card and include a picture of your animal. The better they know your pet, the faster they’ll be able to find the records.

Within the U.S., personal automobile is your best bet. Amtrak and Greyhound have a zero-tolerance policy on non-service animals. New York public transportation – in quite a break from their oft draconian bylaws – allows animals to ride, provided they are muzzled or riding in a carrier. Norm rode the Staten Island Ferry with no problem. Dogfriendly.com has an excellent list of U.S. public transportation systems that are pet-friendly.

Within the U.S., personal automobile is your best bet.

Airlines often accept pets, but vary as to how much they charge and what regulations govern their accommodations. Norm rides in the cabin because he weighs 7 lbs (soaking wet, with his carrier). The Federal Aviation Administration (FAA) leaves it up to the airlines as to whether or not to allow pets.

If the airline does allow pets, standard FAA carry-on baggage policies apply. Delta recently upped their pet fee to $75, per itinerary ($150 round trip). United Airlines charges $100. TACA charges nothing, provided the animal is your only carry-on. Spirit Air charges $75 and only allows pets in carry-on. Check with your carrier for price and – if you make your reservation online – call to reserve a slot for your pet.

Animal and Plant Health Inspection Service (APHIS) Form 7001 is a 30-day, USDA-approved, sextuplicated certificate of health and is the cornerstone of any international and interstate travel for your pet. The form itself costs the vet $15, so keep an eye on how much overhead the vet is adding. It should be accompanied by an actual checkup and certifies that your pet is free of major diseases.

This is something the vet should be maintaining anyway. There is no direct charge for this, but the USDA needs to corroborate this with the Health Certificate. This document is longer lasting, so as long as your pet’s vaccinations are up to date, you don’t need anything more than the original copy. 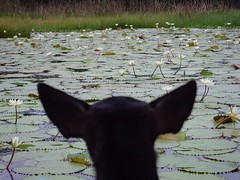 As a computer technician and sci-fi fan, I delight at the thought of turning Norm into a cyborg. Unfortunately, “micro chipping” is not nearly so grand, and is merely a common-sense way of tracking your dog via a chip implanted between their shoulder blades. It does not, in any way, enhance their crime-fighting abilities.

Many countries and states, in fact, require proof that the animal is micro-chipped. Make the one time investment of $35-60 (it varies depending on the vet, chip type, and organization) to avoid any complications.

As of 1994, all 7001 forms have to be approved by Animal and Plant Health Inspection Service (APHIS), a division of the USDA. It costs $24 and at least one office is available in every state, but don’t waste your time checking with the USDA to find them. Instead, go straight to the APHIS website to locate the nearest office. Some consulates require their own stamp as well – the Guatemalan Consulate did, and charged $10.

One heavily-armed Guatemalan police officer even peeked in Norm’s cage, smiled, and wished us a good day as we awaited the arrival of our baggage.

One would think the people at the arrival point would be more interested in your (potentially) diseased pet than your country of origin. The reality on Norm’s trip proved quite to the contrary; USDA and the Customs and Border Protection (CBP) demanded the above forms for him to leave, while the Guatemala City Airport didn’t even look at him.

One heavily-armed Guatemalan police officer even peeked in his cage, smiled, and wished us a good day as we awaited the arrival of our baggage. When we crossed into Canada, neither the American nor Canadian authorities gave Norm a second look.

Does this mean that these forms are complete bollocks? Not so fast. A nice old American woman told me an anecdote about her dog requiring more analysis to get into Canada than their whole family. Even within the United States, Norm’s flights have had varied results.

Sometimes, the airline itself is more concerned than either country. In the end, simply having a valid health certificate, rabies vaccination record, and the after-hours emergency number for your vet should be enough to get you across any border.

Under the worst of circumstances, your pet will be quarantined. This is a particularly serious issue on smaller islands such as Hawaii and Guam, where minimum five-day quarantine is mandatory. When traveling to such locations, its best to check with the consulate or tourism board prior to the trip in order to avoid complications that arise from incomplete information. 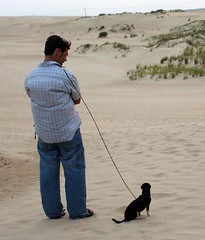 The United States Military provides a great checklist for the most extreme circumstances–Permanent Change of Station (PCS) orders. I stumbled across this checklist. Each country will have certain concerns – identify those concerns and talk to your vet about how best to address them.

Be sure you have up-to-date information. It is important to note that quarantine is rapidly becoming an antiquated thing, with changes made to the system regularly.

Is My Pet Ready for Travel?

As I write this, Norm is sitting 15 feet away from me. We intermittently feed him beef jerky and cat food, but he’s partial to bread and Doritos. He knows his name, but only views calls of “Norm! Come!” as a general suggestion. Despite our cries, he still enjoys chasing the chickens around the yard. In short, Norm is not exactly a world-class show dog in training.

Traveling with a pet, you will have to address a few things. Lodging will be restricted to only those places that allow pets (a bigger problem in the U.S. than abroad). If you want to occasionally “step out” without said quadruped, you’ll want to mitigate any risk of separation anxiety. Being housebroken is essential, as some instances – such as long bus rides in a cargo hold – will put the pet in positions where their bodily functions may be compromised.

Of course, one of the most valuable things we did to aid Norm’s travels was to crate train him. If your pet is small, like Norm, look for an FAA carry-on approved crate. Contrary to its popular usage, Norm has come to find his crate a safe place – he goes there when he’s scared.

There was only one restaurant in Guatemala that refused us entry because of Norm: McDonald’s. At every other restaurant and bar, our polite questions about Norm’s attendance were met with a matter-of-fact attitude. It would seem fitting that the only institutions to reject him would be United States based. 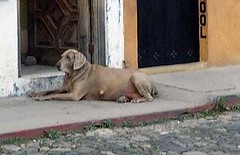 Why are we so afraid, as Americans, to have dogs around us? In my search for the answer, I have found no argument that could not be made the same for children under five. They’re filthy and if not trained properly, can wreak havoc on other patrons and even lose control of key bodily functions.

In fact, children have one extra strike against them–communicable diseases. While dogs could potentially carry bacteria and other pathogens (just the same as children) their viruses do not often translate to our physiologies. In my humble opinion, restaurant’s who ban pets for “Health Reasons” should ban children for the same.

The United States is not going to change any time soon. Its formative years have been spent in a world that knew the realities of penicillin and germs and has been raised–generally speaking–on the belief that we can stave off all illness and other gross miscellany through antibacterial soap. There is, however, a growing underground.

In New Orleans, bars such as Fahy’s Irish Pub embrace the presence of Canines-a typical Friday night will feature as many dogs as patrons. Restaurants like A.W. Schuck’s in Charleston, SC go out of their way to provide pet-friendly outdoor seating. Search hard and you’ll find the modern day rebels in the States, taking a stand against an anti-Dog and -Cat America.

The old western world, meanwhile, has been raised in the generation of existentialism; whatever will be, will be. Bringing your dog or cat into other countries-particularly in Western Europe-can be a rewarding and eye opening experience, one that will have you wondering why “Man’s Best Friend” is a social pariah in his own hometown.

Be careful to check the regulations in India and other eastern lands-while dogs may not be restricted, culture may view them in a way that makes it best to leave your dog, cat, or ferret behind.

In the end, planning your trip with your pet in mind is the key to a smooth journey. If the animal is an afterthought, you’ll run into trouble with document deadlines and airline policies. Be cognizant of who you’re booking tickets with, know the animal policies where you’re going, and keep up with your pets inoculations.

Jacob Bielanski is a Technical College dropout from the boonies who drinks too much. His one-eyed cat “Spudnick”, travel-sized dog “Norm” and sexy photographer wife do most of the work. You can find his ramblings on his blog and his “real” writing at any place that ponies up the dough.
Tagged
Travel
What did you think of this story?
Meh
Good
Awesome