WHEN HIS FIST HIT MY JAW, I knew.

Vanessa and I had just turned a corner; we were only a block from our hostel in Ipanema. The scooter aimed straight for us, blinding us with its headlight, up on the sidewalk. For a moment, I thought they were just messing around. Then he swung.

That night I held ice on my jaw and cried into my pillow. Vanessa paced around with a helpless face, shaking her head, recalling seeing me down on the pavement. Between people coming in and out of the dorm, my girlfriend and I tried to comfort each other. At least we weren’t carrying anything too valuable, we told ourselves. We’re lucky it was only a punch, we said. We knew the risk of being mugged in Rio, but it didn’t mean we were ready for it.

The next day we rehashed it all, admitting mistakes in low voices: how I’d skipped over a sentence in the guidebook about one street to avoid; how I’d ignored the feeling it was a little too quiet when we’d turned the corner; how in the confusion we’d failed to hand our bags over right away; how we’d carried them around at night in the first place. We knew better than to choose our path poorly, to let the dark get too close, to hesitate, to let awareness fall away.

That same day we told the police that the muggers had soft eyes.

One week later we’re having breakfast in Arraial de Cabo, where it’s quiet, where the sun is supposed to make the water clear and “impossibly” blue. But the sun is in hiding, and everything is grey. 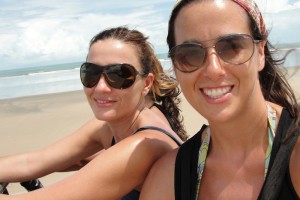 What happened in 30 seconds has a way of replaying 30 times in our heads. Has a way of following us and coloring everything, making it all ugly. Has a way of turning on the pleasant quietness of other streets, throwing dark shadows onto innocent faces, making footsteps behind us louder and closer, turning our every move into something that makes us a target.

Vanessa panicked yesterday, just walking to the supermarket. She almost started crying there in the middle of the street. People were going about their business in the broad daylight and she was weaving strategic paths through them, changing her footsteps with every glance.

Now she drinks tea and bites away on a slice of melon and tells me that she wonders what, exactly, it is we must be missing. What do we want out of this trip anyway? What is it we’re looking so hard for that we bring ourselves to these places? How can we know it won’t happen again? She’s feeling ill and needs more rest and sets the melon down. She’s going back to bed. I watch her discard the melon, and wonder what else she’s ready to throw away at this table.

“It’s not a good day anyway,” I say, looking at the sky. I’m not going to lie. Just chewing the cereal hurts my jaw. Brazil was my idea. Back in Chile, before we arrived here, she was smiling in all the photos. I feel selfish for holding out for all this grey to pass.

I exhale and add more sugar to my coffee. We’re only a month in on our year-long trip. I’m thinking about how we spent three weeks in this country once and loved it. I’m thinking about things that didn’t get written on the police report, our enthusiasm for this place, these people, this journey. I’m questioning what was really stolen in those 30 seconds, and whether it has to be.

I sit by myself with my mug half-empty, just staring at her dishes. I notice the leftover milk in her cereal bowl. A fly has gone belly up and it’s kicking for its life. Its thread-thin black legs are flailing everywhere, but its wings are already submerged. It doesn’t have a prayer in hell, I think, watching it struggle. 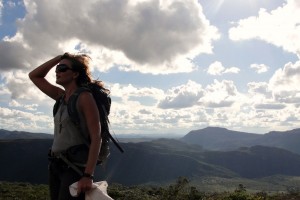 I take a spoon and go gently. I scoop just under the wings and edge the fly to the side. I lift it out of the bowl. It’s limp and folded in on itself, just one side of those legs still kicking. I pour the little wet pile onto the back of my hand and watch it.

First, all its legs start kicking again, and then somehow it’s standing and its wings are dripping. I watch as its middle limbs (that aren’t like arms and aren’t like legs) go back and forth. It spits on these middle limbs and rubs them together in front, and then it swings them behind and runs them down the wings, pushing them back.

It licks its middle limbs and slicks down its wings again and again, rubbing away the milk and drying them, without hurry or hesitation. It does it until it’s not needed anymore. Then the fly lifts from my hand, straight up like a helicopter, like it weighs less than air.

I look up, but it’s gone. I wonder if it’ll live another day or another five, if it’ll be some spider’s food by lunchtime, if it’s learned a thing or two about the dangers of buzzing around the cereal bowl. If it blames itself, if it forgives itself. If it’s smart enough — or stupid enough — to fear.

A few seconds later the fly returns to the table, but this time it lands right on the flesh of that honeydew melon Vanessa’s tossed away, right where she’s left off.

Tagged
Narrative Rio de Janeiro, Brazil
What did you think of this story?
Meh
Good
Awesome

This Copacabana Beach Hotel Has The Most Epic Rooftop Pool