WHILE TEACHING ENGLISH in Korea, Tom Cyr noticed something. He noticed that, while students were scoring 100% on their English exams, they were still unable to speak the language. According to him, the “education system in Korea is based on exams that don’t include speaking or confidence building.”

To address this issue, he had the idea of opening an English-learning school where students would learn functional English rather than just the grammar / spelling / structure that most international schools focus on. He’ll be opening the Pururan English Camp in the town of Pururan in Catanduanes, Philippines, officially on December 26, although he’s already had a set of Korean students come for a week earlier this month. In addition to learning to speak the language, students will also be able to surf and snorkel, play beach volleyball, meet travelers, and participate in several other activities all involving speaking English.

Recently, Tom partnered with Culture Complex (CULCOM), a Korean company that runs seven branches of English-learning cafes in Korea, Japan, and (soon-to-be) Canada. Since the partnership was formed, Tom has been busy with renovations to have the school ready for the first full-time batch of students. He took a few moments to answer some questions about the school and what it means to break free.

CA: Hi Tom. Before we get into the school that you opened, I wanted to ask you about the emotional aspect of embarking on a project like this. I imagine you had a lot of mixed emotions when you first had the idea. What were some of the fears you faced in making your decision to go through with it? And how did you overcome those fears?

TC: Hello Carlo. Intense first question, wow. Well, when I first got started with the school it was all blue skies and high fives. Honestly, in the beginning I didn’t have any fears. I think I had a naïve entrepreneurial spirit telling me whatever I did would succeed. The heavy emotions and fears really began once I quit my previous job and needed to put down my savings for the big investments. That is when everything became a lot more real and I had to make the choice to keep going forward or pull back. My decision to go through with it was tough. The fear I had was the fear of failing. 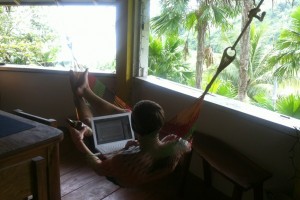 The fear of losing my hard earned money, the fear of being seen as a failure by my friends and family, and the fear that if we opened there would be no students. I mulled over the countless uncertainties but in the end realized there were two big things I knew were certain. One, I believed with all my heart in PEC’s potential, and the other was that this was an undeniable chance to break free. I had this feeling in the pit of my stomach telling me that if I didn’t try I’d wake up on the porch at 70 asking myself, “What if?” That itself was more than enough to push me through my fears.

What were some of the mundane things you needed to accomplish before even arriving on site? Were there lots of hurdles?

The mundane things were mostly just compiling and creating all the materials for teaching. It was a lot to edit and organize. Just thinking about the many hours I spent building the programs is daunting. Thankfully I had two best mates encouraging me along, Red Bull and coffee. The biggest hurdle was figuring out a visa. For already established businesses it isn’t difficult for employees to get visas, but explaining to a country you want to move there for a business that doesn’t have any income statements or paid taxes yet proves much more difficult. It took quite a few phone calls and passport-sized photos, but all worked out in the end.

Did you have anyone local helping you?

Yes, Conz! He is my partner and other half. Without him, the whole operation would be impossible. There is no way you could open a business in the Philippines without a local helping you. Besides the amount of bureaucracy and procedure to get through, you need a local who knows the area and has personal relationships with the locals living there. Being on good terms with the locals is what makes the PEC experience more personal and safe for students.

Can you describe how you first felt when you arrived and saw the school for the first time?

As I first walked up to the school I was horrified. My hands were instantly scrambling for my notebook to make lists. The building was built in the 1990s to house tourists but really isn’t ever used. It needed heavy renovations to make it suitable for housing students and classes. There was so much work to be done and my first walk through was intimidating. Right away my entrepreneurship degree kicked in and I started making lists of to-do’s and deadlines for each piece to be finished. Once everything was organized on paper I was finally able to get beyond all the ants, sparrow houses, and cracked walls.

I could picture the end product in my mind. It sort of felt like a movie when your eyes change what is in front of you into what you want to see. I could see the students laughing, the clean bright walls, the desks, and décor to make it feel like the beach school I imagined. When that happened the butterflies started stirring and I was stoked.

What’s the breakdown of international students? Have you noticed any trends?

Korea was our initial market and we have a Korean company partner, so most are Koreans. Otherwise, we’ve had people checking us out from all over the world. The most dominant trend I’ve noticed thus far is the Middle East and Russia. In the Asian countries, though, there is a huge demand for young learner programs. In Japan and Korea students can’t miss any high school because they’ll fall behind, but when the kids are still in elementary they can afford to take a few weeks off from school to study English. From this demand PEC is now creating programs for 9–15 year-olds.

The days are really full. They usually wake up and have an early breakfast, and then the first classes go from eight to noon. The morning classes are more traditional types of learning with readings, topic discussions, idioms, slang, and presentations. Lunch break is at noon, and then after there is an hour more of class before the fun stuff. 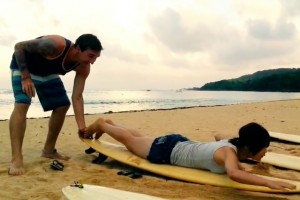 At ‘bout two we have pop song class, play preparation where the students put together funny skits, and improvisation to help build confidence. At three we have a brief prep of terms and phrases for the physical activities and then, depending on the day, we do surfing, beach volleyball, snorkeling, local cooking, beach golf, and, on Fridays, prep for the weekend excursions.

Dinner is at six, and then after we do a little more classroom time. The night focuses on pronunciation / accents, essays, vocab, conversation, and ends with a daily test at nine. After nine we have movies, bonfires, cards, and other more relaxed activities that are optional if the students want to join.

What has the support been like from your family and friends from home? Were there any moments that you might have packed it all in were it not for them?

I have so much gratitude for their support. My friends were supportive throughout it all but really it’s my Ma and Pa that kept me afloat. There were a few nights when I thought about throwing in the towel if it weren’t for their continued support. There is nothing like hearing your ‘rents say they have your back and always believe in you.

How have you surprised yourself?

I had just completed a full sales trip around Korea, presenting PEC at every university in Korea, and I surprised myself after I secured our partnership with Culcom. Going into the first meeting I was focused. They’re an extremely established English learning company in Korea and I wasn’t sure what my small startup could offer them. I wanted to be professional but at the same time wanted to show them that PEC is about having fun while learning.

I wasn’t sure how I could mesh our brands. I did my research and prepared a Powerpoint presentation and vision. I had to sell my idea and paint the picture in their heads. I guess I was just surprised how I could make the connection in Korea, as I am an American opening a business in the Philippines. I didn’t think I could incorporate three countries’ cultures and styles into a presentation that they’d be keen to. Walking out I had perma-grin. Easy, that has been the highlight of the venture thus far.

For anyone reading this right now who is considering breaking free, what have you learned in the process that might help them out in getting started?

Starting a business is like strapping into a rollercoaster that’s being finished just feet in front of you. You’re never quite sure if you might derail, or reach the high of another peak. In the end it’s all about passion. You have to believe in what you are starting and love what it is or what it will become.

I don’t want to talk about a process, because that can all be learned. The belief and drive can’t be learned; it has to be in you. There will be many ups and downs but you just have to stay focused and don’t forget to seek help. Use the internet, library, friends, and whoever else you can. Ask questions, note opinions, and be prepared for people to tell you it won’t work. Don’t get discouraged and remember to have fun.