Spread throughout the world, spanning every region and boundary, is a vast, borderless nation.

Every year, millions migrate to this nation, with language and customs from the farthest reaches of the planet. Its population flows with the seasons, natural and political; though remarkably diverse, all cultures meet here within a single tradition.

And no matter how it may grow or shrink, it can never disappear entirely. And there is always room for one more.

This place contains the best and worst of humanity – it is perhaps no better or worse than anyplace else. But it carries with it a unique potential for sharing and dialogue that exists nowhere else.

It’s the very idea of this place that brings with it the hope of something better.

It’s the very idea of this place that brings with it the hope of something better.

At any given moment, millions of people belong to this Nation of Travelers. Despite their country of origin, they are between homes: the one departed, and the one to which they will return.

This liminal nation serves no one land but rather all of them, in an exchange of information and inspiration – the pride of one people becomes a wonder to another. Here the stranger is welcomed as honored guest, a bond between neighbors which helps us learn more clearly what it is to be human.

The belief that humanity is encompassed within a single community is called cosmopolitanism. A philosophy with ancient roots, its lineage begins with Diogenes: when asked where he came from, he answered, “I am a citizen of the world.”

A Citizen of the World 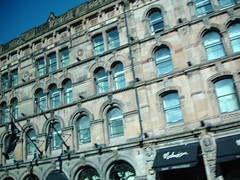 Cosmopolitan has come to mean “worldly” or “sophisticated” (a word itself derived from the love of wisdom), but in the original sense meant a universal love for all people that rejects borders.

Since his declaration, cosmopolitanism has become a banner for the globally conscious – a dedication to preserving dialogue and variety among all ways of life. It has found many adherents throughout the ages, notably in the work of Immanuel Kant, who long ago predicted a union of nations to end war (the forerunner of today’s United Nations).

Cosmopolitanism today inspires many thinkers who continue to explore its possibilities.

Yet cosmopolitanism has also had its opponents. Many philosophers believe such a coalition is illusory at best, while others contend that aggression and conflict are the natural order of things.

Unfortunately, there is ample evidence to support their claims. The gaps between language and beliefs are intimidating, and the recurring horror of war is a crushing argument against an idyllic world.

Hegel believed that war is mandatory for a country’s fitness, a fete of strength for clearing out the dead wood. If change is inevitable, then disparity is the default condition – war is not the reaction to peace, but vice versa.

A stronger and improved community is unachievable through the abiding stagnation of peace, for which there is no call without some defining conflict. Peace, thought Hegel, isn’t merely the absence of war, but its offspring. Peace is only the future tense of war.

If Hegel was correct, the protests of the 60s were a cause lost before they began. How can you dismantle a fundamental aspect of human nature? What does “global peace” entail anyway? How do you create a world without difference, and still maintain individuality?

The solution is not to eliminate conflict or diversity, but to apply them toward productive ends.

The Value of Conflict

Strange as it may sound, conflict is vital to our existence. The friction of our feet on the ground moves us forward; the friction of air against our vocal chords produces sound – without friction, we would be mute and paralyzed.

Strange as it may sound, conflict is vital to our existence.

It’s been said that “two smooth stones do not grind” – so it is with finding a positive result from alternate views. Though conflict has a bad reputation, it’s largely due to the failure to benefit from an inevitability of physics.

And, despite the seeming inconvenience, diversity demands that we consider a broader approach. Only by more conscious reflection can we see things in a new light.

If, as Hegel claimed, peace springs from war, it could be argued that we are stronger not for ability to wage war, but for the ability to find a healthier accord. The escape from dissonance to find harmony demonstrates the creative potential of the chorus – not in defeating variation, but in channeling it.

Modern philosopher Kwame Anthony Appiah, in his book Cosmopolitanism: Ethics in a World of Strangers, writes that

“because there are so many human possibilities worth exploring, we neither expect nor desire that every person or society should converge on a single mode of life. Whatever our obligations are to others (or theirs to us) they often have the right to go their own way.”

Much of the art of travel lies in the ability to negotiate these differences and find new ground to proceed from.

Indeed, as Appiah writes, “there will be times when these two ideals – universal concern and respect for legitimate difference – clash. There’s a sense in which cosmopolitanism is the name not of the solution but of the challenge.” (Emphasis added.)

The City of Humanity 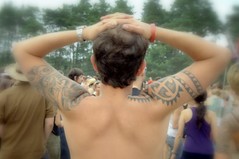 Consider that the noise and bluster of the world is actually the sound of motion: the hum of vehicles on the road, the tenor of voices on the air, all striving to reach similar goals, not contrary ones.

There are endless opportunities for the discovery of new and mutual cultures on the roads that bind us together – for every stone in the walls of fear and apathy, there’s a traveler to break it down.

Cosmopolitanism is a fluid, tenuous idea, threatened often by patriotic fervor and the blindness of dogma.

But it is also a bold and optimistic statement – one that declares citizenship to a state which defies supremacy, transcending any one nation to close the spaces between us.

The traveler nation is the global echo of Diogenes, the actual moment of cosmopolitanism. It is the thrill of finding oneself among fellow seekers all, on the fringes that compose the City of Humanity.

F. Daniel Harbecke (just call him Daniel, the F’s a family thing) is currently working on “A Philosophy of Travel,” which envisions travel as a metaphor for the meaningful experience of life. Daniel has lived in Europe, South America and Asia and is trying to fund his tony lifestyle in Sweet Home Chicago.
Tagged
Activism
What did you think of this story?
Meh
Good
Awesome