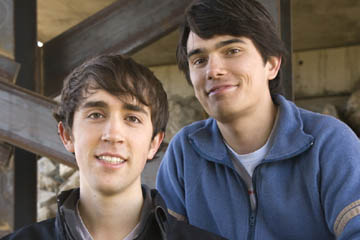 Drinking and travel tend to go hand in hand.

Christopher and Keith abandoned their careers in order to travel to northern Asia with nothing but a backpack and some camera equipment. The result is the riveting PBS documentary Roughing It: Mongolia.

Filmed by Christopher and hosted by Keith, Roughing It: Mongolia encompasses everything from traditional throat singing to reindeer herding to a local wedding to the country’s aforementioned national drink.

National Geographic’s standout Intelligent Travel blog, praised the duo for “succeed[ing] in capturing honest scenes with unique personalities,” and the New York Times noted that both men have “a good eye for the unusual.”

With a future series encompassing the South Pacific in the works for PBS, we recently spoke with both Christopher and Keith about the inspiration for Roughing It.

“I think because the suburbs were so sterile and so aesthetically redundant, I developed a passion for putting myself in environments that were antipodal to where I grew up. I didn’t know that I wanted to be a travel writer at the time, but this was when I vowed to create a life for myself that involved as much travel and as little routine as possible.”

Would you say that’s how you fell into traveling and travel documentaries as well? 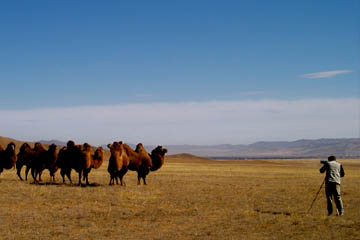 Shooting the herd / Photo Rouging It

CR: I’m not sure that’s exactly it. In my travels abroad, I’ve met a lot of Westerners who seem to have totally rejected their home countries.

I just can’t understand this attitude. The more I travel abroad, the more I discover my appreciation for the United States. Keith and I grew up together in Sacramento, California, and, despite its drawbacks and relative sterility, we both love spending time there.

Travel is not so much a rejection of home as the desire to go beyond it. If anything, it’s the ease of suburban life that needs to be escaped from time to time.

Whenever I’m sick or frustrated during a journey, I remind myself that the word “travel” comes from the French travaille, meaning “to work” or “to toil.” There is a lot of wisdom in this etymology.

BNT: You started Roughing It with a focus on Mongolia; why did you pick that country in particular?

KO: Our goal with the Roughing It series is to travel to the world’s most remote and exotic places, and tell stories that have not been told to a broad American audience.

Chris and I have chosen travel destinations in the past by literally throwing a dart at a map, but we put a bit more thought into choosing our inaugural Roughing It location.

Originally, we were considering a program taking us and our viewers along the Trans-Siberian Railway. As Chris and I mulled over the possibility of spending weeks on a train, we thought focusing on one area would be a better fit and a more pleasant experience.

We chose Mongolia. It’s a remote country that most people know very little about, including ourselves at the time, and when we heard that Mongolia’s national alcohol is fermented horse milk, it sealed the deal.

BNT: Why the medium of film over, say, a travel book? Were either of you film majors?

CR: Neither of us studied film, and I think, in the end, it’s better that way. Some people can really thrive in a film school environment, but just as many can be stifled.

If you have passion and a vision, I think the technical knowledge will come quickly.

If you have passion and a vision, I think the technical knowledge will come quickly.

As far as the medium, there is a strong prejudice against the travel film as somewhat inferior to other forms of documentary. For a long time, too, travel writing was seen as sub-literary. When people heard “travel writing,” they thought guidebooks and information for tourists.

That changed in the 1970s and 1980s with writers like Colin Thubron, Paul Theroux, and Bruce Chatwin. Chatwin used to go into bookstores and see his books next to “Maui on a Shoestring.” He thought, rightly, that his books should be under Literature.

And, after some time, book publishers, sellers, reviewers, and readers started to agree with him.

I think the travel documentary is behind travel literature by about 30 years. It’s still stuck in “Maui on a Shoestring” and “Eat a Live Scorpion.” The one major exception is Michael Palin. His Himalaya, in particular, was a major influence for us.

In Mongolia, we would always joke: “What would Palin do?” When I look back at the film, it’s clear that we weren’t joking. Palin’s influence is definitely there, and I’m happy with it.

BNT: Who are your inspirations for travel? What travel writers are on your bookshelves? 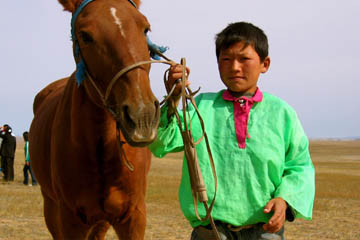 Boy and his horse / Photo Rouging It

CR: Personally, I’m definitely more influenced by travel writers than travel filmmakers. There are filmmakers and photographers who inspire me visually–Cartier-Bresson is an influence, as is Werner Herzog.

More recently, the cinematography in Sean Penn’s Into the Wild was incredible. But, with Palin being the exception, it’s the travel writers who are really creating something meaningful and lasting.

People talk a lot about “travel attitude,” and I couldn’t think of a better one than Colin Thubron’s. He’s so impressive and erudite, and at the same time so humble and self-effacing. His book In Siberia is a masterpiece.

He captures the most incredible details and characters, and holds it all together with tight thematic interests and larger socio-historical questions. Erudition, adventure, poetic sensibility–he really sets the gold standard.

BNT: In other interviews, you’ve alluded to interviewing Mongolian President Nambaryn Enkhbayar. How did that not manage to make it into the final cut?

KO: Roughing It: Mongolia was originally intended to be an hour long program.

What we found as we shopped around our program to PBS and other distributors was that the strengths of our program and what sets ours apart from other travel shows is not the scenes where I was interviewing the President, or the leading religious figure in Mongolia.

Rather Roughing It really stood out in the scenes where we focus on interacting with Mongolians-when I try throat singing with a local throat singing group, when I camp out with nomadic reindeer herders, when I pathetically attempt to dethrone a provincial wrestling champion.

So after months and months of editing, and re-editing, we ultimately decided to make the show a half hour program focusing on the most interactive scenes, which were also the scenes that present viewers with the most candid window into Mongolian culture.

But don’t worry; our DVD has all the deleted scenes including our interview with the Mongolian Head of State.

BNT: Also on the topic of scenes that were cut, who won in the wrestling match between Keith and Olympic silver medalist Jamstying Davaajav?

KO: After my match with the provincial wrestling champion at the Naadam festival, I felt like I needed a few pointers so that next time around I wouldn’t walk away with a skinned knee and teary eyes. Who better to get wrestling tips from then Mongolia’s most accomplished Olympian?

The problem was that my ‘lesson’ was more of barrage of throws that left me flat on my back pretty much the entire time. I will say though, and Chris can substantiate this, Jamstying complimented me on my strong arms.

BNT: You seemed to travel with a light, even nomadic load while in Mongolia. What do you absolutely have to have? What’s one item you’ve left behind that you normally would feel glued to?

Traveling light is an absolute must when you’re on the move as much as we had to be during production.

KO: Whenever I travel, I relish in the fact that I get to escape my cell phone. With all the calls Chris and I have had to make in promoting Roughing It and getting the series off the ground, I feel like it’s just another appendage.

Traveling light is an absolute must when you’re on the move as much as we had to be during production. I pity those backpackers who have bags strapped to their bodies that look as big as them.

When I’m packing my essentials, I never forget some pepto bismol, a good book, and my journal.

BNT: Finally, what’s up next for Roughing It?

We’re going to shoot more verité and really bring up our production value. And, most importantly, we’ll continue to find the most interesting people in the places we visit and tell their stories in the most compelling way.

It’s going to be six months of adventure through some of the most exotic and remote countries on the planet: Indonesia, Malaysia, Singapore, the Philippines, Papua New Guinea, and East Timor. We’re expecting a Fall 2009 release.

In the meantime, I’m finishing up production on a feature documentary called Diamond in the Dunes, which is the story of a Muslim baseball team in China’s Far West. We hope to start the festival circuit early next year.

Learn more about Roughing It: Mongolia and even watch a few video clips.