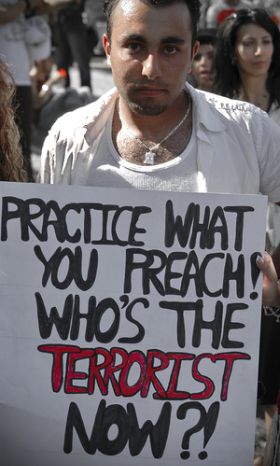 A recent post by Abdul Sattar, entitled A Defense of Muslim Activism, got me thinking.

Sattar’s post does not follow along the lines implied by the title. In my mind, he was going to give reasons of how Muslims can and should be activists in this post 9/11 world without being categorized as terrorists.

While noting that some believe, “Islamic activism today is just the tattered remnant of political movements long since gone awry,” his focus instead falls on the idea that some believe to be an activist is inherently anti-spiritual.

One can easily glean from the Qur’an, Sunnah, and the legacy of our scholars that our primary purpose on this Earth is to worship Allah and die in a state knowing that our salvation is supported by sincere intentions and efforts…we should live as if we are “wayfarers or travelers on the way.”

Take out Allah, insert God, Buddha (with a different sort of afterlife), or Mohammed, and you have the basic premise of most of the world’s religions – worship an entity and live meekly in this life to gain riches after. No room for activism there.

And yet, most wars throughout history have been based on religion (at least outwardly), right? Some might consider war as an activist activity; it is the extreme version of standing up for one’s rights. So the ‘extreme’ activist – who will fight, mutilate, or kill – can certainly be seen as anti-spiritual.

But what about the activists who, because of their religious beliefs, ‘fight’ for the rights of the oppressed, mishandled, and misjudged?

While the ultimate goal in Islam is to worship Allah on the way to the afterlife, Sattar argues for activism, noting, “the Muslim traveler is obligated to strive to prevent injustice when he sees it.”

The real question is, where is the line of activism in the name of religion or spirit, and who draws it?

Do you think that many activists go too far? Share your thoughts below.