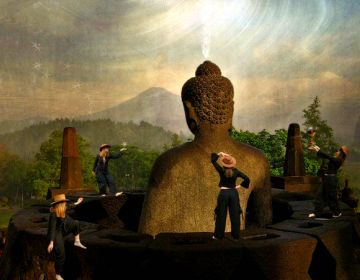 File this one under ‘not quite sure of the implications.’

A recent study set out to determine the “religiousity” in patients with brain cancer before and after the removal of tumors. Turns out damage to one part of the brain, both from the tumor itself and the removal of it, is likely to make you more, you guessed it, God-lovin’.

Actually it goes beyond God and includes the Universe, or connectedness to others, so this finding isn’t just for Christians. But the “holy hole” is in a very-specific area of the brain – the posterior parietal cortex. That means if a person has a tumor in the frontal cortex, or front-part, of the brain, they’re more than likely feeling a bit less universally-connected.

Normally, the posterior parietal cortex is linked to maintaining one’s “sense of self,” and so it is interesting to find it might also have to do with understanding there is something greater than the self.

The outcome of the 88 brain-cancer patients who took part in the study found that those who had tumors removed from the posterior had even more feelings of self-transcendence than before surgery, while the patients with tumors at the front had no change in spiritual belief after surgery.

What does this mean for those without brain tumors? Well, as blogger Ryan Sager puts it:

What this would appear to show is that feelings of self-transcendence, and thus possibly religiosity, can be changed by alterations to neuroanatomy — in this case, first from a tumor, and then from the inevitable damage incurred by removal of a tumor.

As an old professor of mine who posted this article noted, this could point to particular religious practices such as kundalini yoga – where an energy force “snakes” its way up the body and out the top of the head – might have the ability to shift neurons in the brain. Many other spiritual systems focus on energy coming in and out of this same area of the skull, and therefore practicing them may tangibly make people more religious.

What are the negative implications possible? Well, let’s see. Possibly backing up those people who believe that a higher power is simply a survival mechanism that our brains created? Or the more a brain is healthy and fully-developed (and not missing a part), the less likely a person is to believe in God/the Universe? Even better, as Sager points out, the possibility of a quick surgery to “cure” believers, or non-believers, depending on what those in charge desire at the time?

Of course, some could say that from an evolutionary standpoint, developing a tumor and then having it removed in fact develops the brain further – new cells and information are allowed to flood into that open space of the brain that computes self-awareness. Naturally, the same outcome might be true by developing your spiritual muscles.

What do you think of the implications of this study? Share your thoughts below.