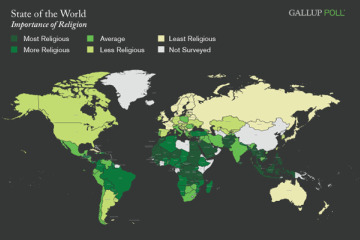 Which countries come to mind when you hear the word “religious”? Israel? India? Istanbul?

Ok, ok, Istanbul isn’t a country, but it was the inspiration for that catchy tune.

Well, if you guessed any of the above, you didn’t hit even one of the countries that made the top 11 Most Religious Countries in the world in a recent Gallup Poll.

Coming in at the top spot was Egypt, followed by Bangladesh, and a host of African countries, along with Indonesia.

On the flip side, which are the least religious countries in the world?

Estonia had the lowest percentage of people who said that religion plays an important part in their lives, followed by a few fair-skinned places: Sweden, Denmark, and Norway. Rounding out the top five is a former Communist territory, the Czech Republic.

Even more interesting, according to the same poll:

A population’s religiosity level is strongly related to its average standard of living…(the poll) indicates that 8 of the 11 countries in which almost all residents (at least 98%) say religion is important in their daily lives are poorer nations in sub-Saharan Africa and Asia.

And you guessed it, several of the least religious countries have the highest living standards, including Hong Kong, Japan, and the fair-haired triple whammy mentioned above.

What does this mean exactly? Is there a clear link between being devoted to a higher power and having no money in your pocket?

Of course, one of the problems with this purported correlation is the United States, which has both a high standard of living AND high marks for being religious.

What do you think – is there a real correlation between religion and standard of living? Share your thoughts below.