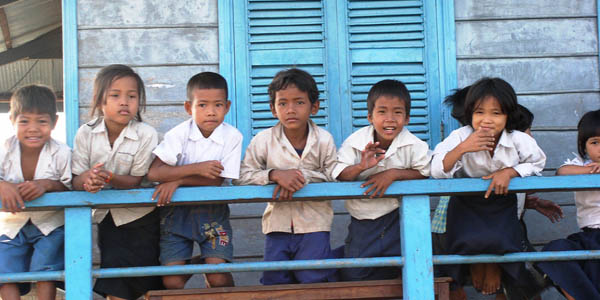 Students in Cambodia struggle with metaphors and creative logic. Is the reason cultural…or is there a deeper mystery?

Being a foreigner in Cambodia often feels like one big web of miscommunication.

At the most basic level, this has to do with my minimal Khmer vocabulary. Even when I find the right words, there’s a good chance I’ll mangle them beyond recognition. Likewise, I hate seeing the shattered look on a Khmer person’s face when he thinks he is speaking English and I cannot understand a single word.

But the missed connections are more than just a problem of language. Even when someone speaks English well, there are still dozens of cultural potholes that we can fall into.

Here’s one that comes up all the time: Khmer people exist in a world in which everything is taken very literally.

Sometimes this manifests itself as funny cultural quirks. (You want an ice cream sandwich in Cambodia? It’s a baguette with some little scoops of sorbet stuffed inside).

But I didn’t realize how compelled Westerners are to turn everything into an abstraction until I saw their ideas constantly being lost in translation, and that can be utterly maddening for everyone involved. 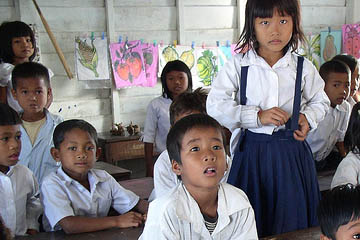 At the Buddhist school where Jason and I teach an English class full of teenagers each week, our attempts to recreate Western education techniques fail miserably.

Pictionary seemed like a grand idea, but the students were easily frustrated, as they didn’t understand the concept of drawing anything besides a literal rendering of the word.

Given the word “party,” a Westerner might draw a cocktail glass or a disco ball, party hats or a birthday cake. One Khmer student drew four people sitting at a table. That is, after all, what parties often look like.

When trying to get her teammates to guess “teacher,” another student drew a picture of a monk, at which point her team guessed “monk” repeatedly. We suggested adding something to the picture, but she was confused – why would she draw an apple or a chalkboard or a pencil when the word was “teacher”?

If Pictionary was arduous, Twenty Questions was a complete catastrophe. The class seemed perplexed by the notion of “guessing what we were thinking.” (Why would they do that? Why couldn’t we just tell them?)

When we convinced them to start asking questions, the queries tended to be hesitant and completely unrelated. “Is it pizza?” one girl asked hopefully. “Is it a duck?” asked the next student.

Even after we corrected this habit of asking about single items and provided them with some hints, the game limped along pathetically. “Okay,” I said. “So remember, it’s not served hot and it’s something round. What could it be?”

“Is it soup?” one student asked innocently. I had to restrain an urge to hurl an eraser at him. The lesson had ceased to be about English at all – it had become an exercise in abstract thinking and logic.

On days when we give up and teach by rote, the students are relieved, cheerfully repeating our monotone pronunciations.

Skills like creative thinking and basic logic feel innate to me, but they’re not. I was taught them just like so many other things.

If this happened in a Western classroom full of seventeen-year-olds, one would conclude that surely learning disabilities were to blame. But on the contrary, our Khmer students are very bright, remembering vocabulary and grammar rules quickly. Their learning style has little to do with intelligence level.

At first I thought the explanation would involve complicated notions of Eastern thought and perspectives (which it might). But I think the more likely answer is that most Khmer people can’t think abstractly because nobody bothered to teach them how.

Skills like creative thinking and basic logic feel innate to me, like an inborn part of my personality, but I’m realizing that they’re not. I was taught them just like so many other things, at school, from my family, and in my backyard, playing with the girl next door.

That playtime when we were very little girls is the first time I remember learning that an abstract “imagined world” and a real world could coexist.

For years, summer vacations were full of magic trees and blue whales swimming in the back yard, of royal tea parties and dastardly villains lurking in the basement.

The Privilege To Learn 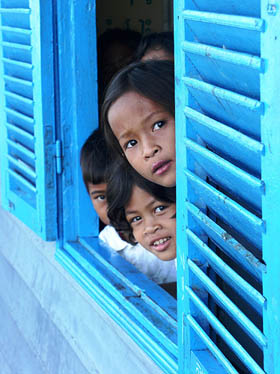 In a country razed by horror just a generation ago, my Khmer students have never been taught to pay attention to anything other than the very real and pressing world around them.

Maybe it is a little like America in its infancy – I used to dread when early American literature was assigned in high school, all those texts of Thomas Payne and John Smith and Cotton Mather that speak of much passion and hard work but little imagination or whimsy.

They were men who were busy inventing a nation, and they had no time to invent anything else. I see echoes of this in Cambodia.

Paintings by Khmer artists, for instance, are not valued for originality of content or technique, but rather for their careful precision in replicating a few standard designs. They can recreate a temple backlit by a sunset perfectly, but would they ever again be able to translate their inner life onto the canvas?

It makes me painfully aware that a life like mine, filled with thought and art and invention, could only have been hatched in a handful of very fortunate countries.

On the one hand, it makes me newly appreciative of the country of my birth and desperately grateful.

It is both a heady and terrible realization to know that those deepest and most private parts of the mind, the mental pathways that serve as the foundation of one’s self, were granted by a privilege that I did nothing to deserve.