If you happen to be traveling from London on Eurostar and poke your head into first class, you’ll probably see Mark Smith in Seat 61.

He’ll be reading a copy of T.E. Lawrence or enjoying the unspoiled (and unobstructed) scenery with his wife, Nicolette, and their year-old son, Nathaniel.

While he claims they live as an “ordinary family” in Buckinghamshire, Mark (a career railway man) is anything but ordinary to the 400,000 people a month who visit his website, The Man in Seat 61 where he outlines his favorite routes for train and ferry travel.

Since ditching the plane is the easiest way to reduce your carbon footprint, we caught up with Mark Smith recently in between trips to get his thoughts on slow travel, free-cycling furniture, and one infamous bottle of vodka.

BNT: What’s your primary draw towards trains and ferries as a means of travel? Is it economics or are you just aviophobic?

Trains and ferries allow you to see and experience where you’re going, making the journey part of your holiday.

MS: Trains and ferries allow you to see and experience where you’re going, making the journey part of your holiday.

They treat you like a human being, with space to move around, a bed to sleep in at night, and even a restaurant for your meals in some cases.

Flying has been described as “infantalising,” having to sit down and do what you’re told. On trains and ships you’re generally treated like an adult. For example, you’re over 18, so you can bring your own bottle of wine if you like. Try doing that on a RyanAir flight!

BNT: Like the slow food movement, people have begun to talk about slow travel, something that trains and other forms of ground/sea transportation dovetail into nicely. What are your thoughts on slow travel?

But if I’m sometimes uncomfortable with the “slow travel” terminology, the concept behind it is sound. We’re in danger of creating a world in which every journey is an identical non-experience at 30,000 feet. Flying has lost its glamor, and I think it’s time we put the interest, excitement and romance back into travel.

What could be more romantic than reaching Spain by sleeping-car or Norway by liner? 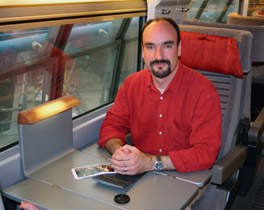 MS: I took to asking for seat 61 (in cars 7, 8 or 11) whenever I treated myself to Eurostar first class. I’ve left London in seat 61 bound for Morocco, Tunisia, the Crimea, and even Tokyo via Moscow and Vladivostok.

So when I started a website “The Man in Seat Sixty-One” seemed the ideal name.

BNT: Do you live green in other aspects of your life/routine?

MS: We’re just an ordinary family trying to be more considerate towards the environment.

Our 20 month old son wears real cloth nappies or biodegradable disposable ones. We’ve equipped the house with low-energy light bulbs, we recycle what we can, we “freecycle” furniture and the like if and when we replace it, and use products such as Ecover washing up liquid and washing machine detergent.

BNT: How many people have you helped find ways to travel by train and ferry? Do you have any memorable experiences from “meeting” people via your website?

MS: The site now gets around 400,000 visitors a month and the e-mails keep me busy! I love e-mails such as that from a man whose Polish wife wouldn’t fly and thought she therefore couldn’t visit her family. Thanks to seat61.com, her husband booked train tickets from London to Poland and off they went.

BNT: What first made you want to travel? Is it safe to say you’ve read a lot of Paul Theroux?

MS: I’ve read Paul Theroux, but also T.E. Lawrence (of Arabia fame), Wilfred Thesiger, Fitzroy MacLean. Each writer is very different, but all evoke an image of the countries they write about which makes me want to go there.

I’d argue that any experience, even one that at first impression is unpleasant, is better than having no experience at all.

MS: I’d argue that any experience, even one that at first impression is unpleasant, is better than having no experience at all.

Such as traveling on the filthiest and most decrepit slow train from Aswan to Luxor, but meeting a series of Egyptian locals en route-from schoolchildren who asked me to read out their English schoolbooks to a young man who worked on the Nile cruise boats whose opening line was “I like Whiskey. You like whiskey?”

And my best train experience? Well, that would have to be traveling to Italy aboard the superb Venice Simplon Orient Express and accidentally getting engaged to my now wife somewhere in the Brenner Pass!

BNT: What’s the most outrageous/memorable thing you’ve seen (train and/or ferry) that you’d never see on a plane?

Customs official at the Ukraine/Polish border dismantling my sleeping-car and finding a complete off-license of illicit Vodka in the paneling three feet above my head (not mine, I hasten to add!)

Watching a younger pupil shout “Solidarity! Solidarity!” out of a train window on a school trip; not usually controversial, but the year was 1982, the train was the Moscow Express, and the station was Warsaw Centralna! I’ve never seen a Russian train conductress go so berserk…

To read more Mark Smith, visit his website The Man in Seat 61.

What are your thoughts on train travel? Leave a comment below!