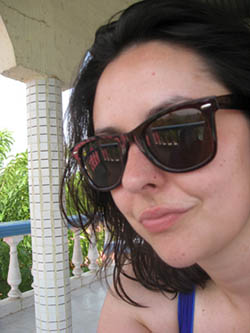 Allison Cross, with some sweet shades.

Landing late at night at Lungi Airport in Sierra Leone, I couldn’t see much of the country where I’d be spending the next seven months.

It was dark as I exited the plane and crossed the tarmac, except for a few fluorescent lights glowing outside the terminal. Riding in an SUV towards the ferry that would take me to the capital Freetown, I could just make out the shapes of palm trees, clotheslines and dwellings in the darkness.

Without stable electricity, residents of Freetown spend their nights in almost total darkness. As the car wove through the streets on the way to the guesthouse, I could see street vendors huddled around kerosene lanterns.

I pressed my face to the window to try and see what they were selling. The streets were still crowded, even at midnight, but the darkness made the city seem mysterious and intimidating.

I lay in bed that night wondering what kind of place I’d see the next day, often distracted by the intense humidity and a combination of mosquitoes and bed bugs.

Very early the next morning, I heard the signs of a noisy, bustling city before I saw it. 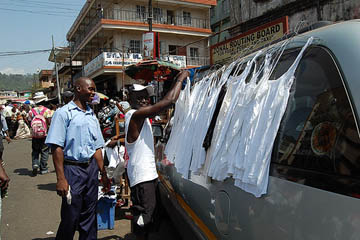 Babies screamed. Cars honked and slammed on their breaks. Water thrown from buckets slapped the pavement. Music blared from speakers on the backs of trucks.

As I eventually explored the streets, I discovered a city that was loud, hot and crowded. The legendary heat of the West African country made sweat pour down my face.

In the daylight, Freetown was full of activity. Stalls crammed side by side on the streets sell anything you could ever want: luggage, toothpaste, jeans, passport photos, fruit, mayonnaise and cell phone minutes.

As a foreigner, people call out to me often, asking if I needed to exchange American dollars or if I want to buy some bruised mangoes. The men are particularly aggressive, quick to ask if I’m married and whether I’ll share my phone number with them.

The air is thick with different smells: food cooking on coal fires, exhaust, spices and sewage. Garbage lines the streets and the sewers are only partially covered by rickety cement grates.

As I worked on getting settled in Sierra Leone, I learned I would have to use patience in everything I did.

As I worked on getting settled in Sierra Leone, I learned I would have to use patience in everything I did.

Opening a bank account took three hours. Getting wireless Internet to work took three days. Driving two kilometers in heavy traffic kept me in the car for an hour. If they told me it would take five minutes, it would usually take an hour.

Although vibrant and extremely friendly, Sierra Leone seems to be a country of many contradictions.

Average people wear name-brand clothing castoffs from North America, like Nike and Puma, but survive on no more than $1 a day. Poverty is everywhere, but everyone owns cell phones, which are fairly cheap and along with SIM cards, very easy to obtain.

Running water is extremely rare and most people bathe and cook using water in buckets obtained from wells.

But while I was taking bucket showers, I was able to buy a USB stick that gives me reliable, although quite slow, Internet access anywhere in the country. It will certainly take me some time to adapt.

What questions do you have for Allison? Share in the comments and she can answer them in future posts!