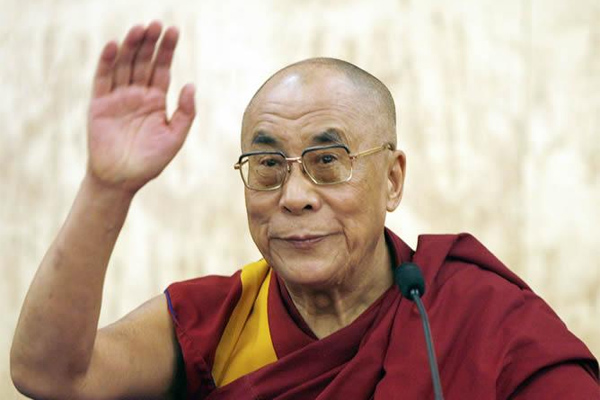 I saw the Dalai Lama speak at the Cathedral of St John the Divine in New York on Sunday (just hours before the LOST finale that was weighing on my mind), and I have to say the experience was a little underwhelming.

Let me start by saying that I’m not an expert in Buddhism, or a devotee of Dalai Lama (let’s just abbreviate it to D.L. for short), but I was very intrigued to see him speak and be in his “presence”. I’d read many stories about how his presence is very… I don’t know… peaceful. Like a glass of warm milk on a cold day… or a glass of cold milk on a hot day… or something like that.

While I was hoping to come away with some interesting, maybe even profound, nuggets of wisdom, I think I set my expectations too high.

I don’t know if it was the poor audio, the Lama’s super-thick, Yoda-esque accent, or the fact that it’s simply too hard to convey anything of substance in that kind of format.

Also, I may have misheard but I think at one point he told Copenhagen to “suck it”, and recommended being compassionate and “sassy.” Yeah, I’m pretty sure I misheard.

It’s definitely cool to be able to say I saw him, and I’m interested in reading some of his books to better understand his message. After Sunday, I can’t help but think that part of his wide appeal for the American New Agey types lining up at the Cathedral is that he seems to provide some profound Ghandi-esque messages in a non-threatening, visually appealing package.

He has a serene, sweet physical presence, a soft-spoken demeanor, and is known for spreading messages of peace. He is never angry, imposing, or confrontational. It’s the archetype of the spiritual leader. Leaving aside major religious figures, just think of modern examples of popular spiritual figures: Wayne Dyer, Eckart Tolle, Ram Dass, Alan Watts, etc.

As we waited to enter the Cathedral of St. John the Divine, it was amazing to see the huge line of people caught up in the hype. Some were obviously Buddhists or Dalai Lama devotees, others like myself were laypeople just looking for some thought provoking ideas. One woman spent 30 minutes chanting at the top of her lungs before abandoning the line for a slice of pizza.

The main area of the Cathedral is absolutely enormous, very tall but very narrow. This makes for great acoustics if you’re chanting during Mass, horrible acoustics when you’re trying to hear a non-native English speaker enunciate something profound. D.L. first spoke for about 10-15 minutes, and then was on a “panel” with two other interfaith experts. I say “panel” in quotes because it was really just D.L. giving long unintelligible answers, and two other people mostly staring like puzzled sheep.

“Do you know what the Lama says? Gunga galunga… gunga, gunga-galunga.” – Carl, Caddyshack

Straining to hear what I could from the lips of His Holiness across an echoing Gothic cathedral full of fans, I couldn’t help feeling disappointed. All I took away from the talk was a garbled message of “the children are our future,” “all religions can learn from each other,” and “working together is good.” Now I’m all for that, but I guess I was looking for something a little more… meaty (or at least entertaining).

I’m willing to give the Dalai Lama the benefit of the doubt and just say it was a crappy format for him to say anything of substance, and I am looking forward to reading some of his books.

In the end, after all, this was basically a glorified book tour, but instead of Barnes & Noble, it was staged at Radio City Music Hall and the Cathedral of St. John the Divine.

D.L.’s new book Toward a True Kinship of Faiths: How the World’s Religions Can Come Together just dropped, and he had to do his authorly duty to make the publisher happy by pimping it out in an all-out media blitz.

I’m hoping I’ll take away a lot more from reading the book.

Did anyone else have a more enlightening experience at one of the Dalai Lama’s appearances?

Tagged
Religion China
What did you think of this story?
Meh
Good
Awesome

How to travel on Pakistan’s spectacular Karakoram Highway, the world’s highest road

In Wuhan, hot dry noodle vendors reopening is a welcome sign of normalcy