View all travel news
Top Countries
Top CitiesView All Destinations
Trending Regions
Trending Cities
Load More
Baxter Jackson uses advice from his AA sponsor to pick himself up off the ground and hop back on the board.

SIX MONTHS WITHOUT a drink hit today. For the 180th time in a row, I woke up sober in the top bunk of a halfway house on 23rd and H St. in Midtown, Sacramento. My cellie, an ex-con named Sidewinder, was in the bunk below, coughing up his morning phlegm. AA’s promise if you do all the 12 Steps: “A life beyond your wildest dreams.”

As I knew the Bridges II crew was either meeting with their parole officers, pissing in a cup, or watching Cops on TV, (not too many 10,000 dollar rehab grads like me in half-way houses these days), there was only one way to celebrate a six month reality check for an 80’s skater like myself – with a little morning sesh before the grom invasion at the 28th & B. Skate Park.

Before Sidewinder could do his customary hobble to the bureau for his Marlboro Reds, I pulled on my Levi’s, threw a white t-shirt over my head, slipped on my Vans and, with skateboard in hand, headed out the screen door of the old Victorian home they’d subdivided into ‘cells’ and filled with ex-cons, junkies, and alkies alike.

Smiling, I waved to the old hippie lady next door who looked up from watering her gardenias and returned the wave as I rolled into intersection.

With a series of quickening steps, I scraped the tail of my board down the sidewalk and jumped on — the sudden roar of urethane wheels on concrete, the pop of an ollie into the shaded street in front of our ‘transitional living’ home. Smiling, I waved to the old hippie lady next door who looked up from watering her gardenias and returned the wave as I rolled into intersection.

There’d been rumors the local Red Bull Team might donate their demo ramp to the B St. Park. I found my rhythm pushing down the street and quickened my pace. The blacktop blurred beneath me. Cresting the one and only hill the railroad tracks traversed on 28th, I looked down at the knoll I’d bomb on the way home.

Mid-morning light flickered in through the broad leaves high overhead. The beading sweat on the back of my neck cooled by the Delta breeze.

Expectations. I really hated that word. Heard it too many times at the meetings of Alcoholics Anonymous –“Expectations are just premeditated resentments.” The hardcore suggest living without them because they screw everything up – but how the fuck you supposed to live expectation free?

I screeched to a halt at the end of the gravel-strewn road past the old city dump at Sutter’s Landing (wonder why they always pick the choicest spots for skateparks?) and that’s when I heard the unmistakable sound and knew the rumors were true. The Red Bull Boys had indeed been here since my last visit and left their demo ramp behind as a souvenir. It was seven feet tall, twenty-four feet wide with eight-foot extensions, and steel coping everywhere it counted.

Stoked, I ollied onto the ramp’s flat bottom, pumping the transitions, building speed, and getting higher with each pass. The motion generated the sound I heard when I approached the park — something like a giant vacuum cleaner on slow-mo. Vhroomm! Vhrooom! 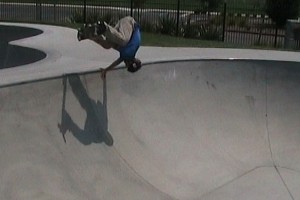 Coming off a 50/50 grind on the edge of the ramp, my footing got tangled up underneath me. Awkwardly running through the air for a split second, I ended up tripping, falling, and hitting my head hard against the masonite skin of the ramp on my very first run.

Lying prone on the flat, little sparks of light danced in my peripheral vision like an acid flashback. Righting myself from the slam, I ran back up the steep eight-foot transition and dropped the board under my feet about halfway up the tranny, trying to skate off the shock of the slam.

Slowly building up speed, I made it to take off speed. Gritting my teeth, I popped off the top lip of the ramp into the air, grabbed the outside edge of my board, and held on — for too long. I came down heavy and slammed again. My head was ringing, stars were whirling, elbows swelling. I limped off the flat bottom and kicked my board halfway across the skatepark.

No matter how many times I’ve heard it in AA meetings the person saying it always acts like they’re the first one to ever throw it out there, like they’re laying down some serious spiritual knowledge: “Doing the same thing over and over again expecting a different result is the definition of insanity.” I stuck out my tongue, picked up my board, and spit.

The first of batch of groms arrived – suburban kids dropped off in mom’s SUV. Knee-pads and helmets already on. Boards almost as big as they are. Self-consciously they skated around me and the street obstacles strewn about — a grind rail here, a pyramid and quarter pipe there.

My AA sponsor, a half-black, half-Irish guy named Carl who liked to say motherfucka a lot when he shared at meetings, had been teaching me about the bondage of self. About how we’re all so scared shitless we ain’t gonna get what we want that we try to impose our will at any cost and end up imprisoning ourselves, “and that pisses a motherfucka off, if you know what I’m saying, Danny boy.”

The thing is, Danny Boy, if you wanna be free of fear, and I know you do, mothafucka, you first gotta accept that it’s there.

Throwing my board up onto the ramp’s deck, I clamored up the half-pipe and watched the kids mill about, growing braver by the minute. I closed my eyes for a second and Carl appeared again. “The thing is, Danny Boy, if you wanna be free of fear, and I know you do, mothafucka, you first gotta accept that it’s there. Acceptance is the first step to what my people called emancipation and this shit is true for everything. Everything.”

I kept my eyes closed and under my breath, said my own goddamned version of the serenity prayer. “God, grant me the fucking serenity to accept the things I cannot fucking change, the courage to change the things I can, and wisdom to know the fucking difference.” I opened my eyes. Another skater had climbed up the ramp when I had my eyes closed and was on the deck opposite me, smiling. Warily, I nodded a greeting, moving to the ramp’s edge.

Breathe, relax, trust the process, is what they say in AA. Envision it and once you’ve done your part, leave the results to God. It’s that, the letting go, that takes faith. One more deep breath before I dropped in. Vhroomm! Vhroomm! Rolling backward into a tail stall on the opposing wall, I positioned my feet.

Dropping back in again, I increased my speed by crouching low. Popping the tail off the lip, up and over the coping I flew, grabbing the outside edge of my board and hitting my peak in the air. Then, the most beautiful sound in the world: all four wheels of my skate touching down on the ramp’s smooth surface at the same time. It’s a sound of freedom, so satisfying, clean, and true. Rolling up the other wall of the ramp, smiling.

Afterward, the other skater asked me, “Hey, dude were you praying before you dropped in?”

12 Facts About Sacramento That Will Surprise You