CAIRO AIRPORT IS DESERTED when my flight lands. The silence in the terminal is broken only by hurried footsteps echoing loudly off concrete walls. It’s December 2011, during the height of Egypt’s elections, in the aftermath of revolution.

Abdo is resigned when I first board his shuttle. When he discovers that I speak a smattering of Arabic, he beams and thanks me for coming during the troubles. As I struggle with my rusty Arabic, I learn Abdo’s view on the revolution: It was necessary, and regime change is welcomed, but now Egypt needs to focus on rebuilding.

In typical Arab fashion, I sit down with Abu-walid, a villager who owns a handful of camels in Giza city. The waiting room is all mirrors and maroon lace trim covered in layers of grime and cigarette smoke. Sweet aromas of mint waft across my face when I’m offered tea, a welcome contrast to the strong smell of camel.

Abu-walid describes the route, pointing to a massive board with carvings of the nine pyramids and sphinx. I’m struck by the irony of using hieroglyphics from four thousand years ago to sell tours today.

I begin the haggling. It’s hard to argue when Abu-walid laments about business drying up, the increasing price of bread, and having to support his wife and children. I trek through the sands confident that a camel ride was not such a bad deal after all. Maybe I’ve provided some help to Abu-walid’s family. 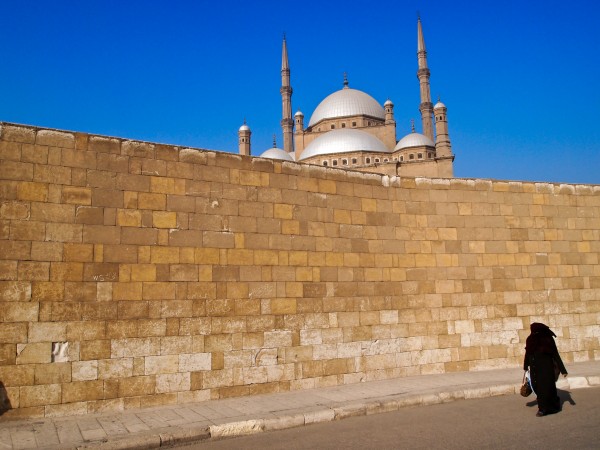 A lone woman walks past the Alabaster Mosque atop Cairo’s citadel hill.

Alexandria is calm, its attractions empty except for the occasional school group. I’m greeted by Gamil, one of the rifle-toting tourist police. These guys are charged with protecting antiquities, tourists, and the nation’s largest economic sector; they’re known to be fiercely overprotective of visitors. So, when Gamil asks me to walk with him, I don’t hesitate.

He’s pleasant and speaks English well, welcoming me to Egypt and the Qaitbay citadel. But, when the tour commentary starts, I know where this is heading. Many of the lesser laws are broken daily. Police and military, concerned with larger issues and keeping the peace, generally overlook smaller infractions. Gamil is blatantly giving unlicensed tours for tips. I politely decline, saying I want to explore independently.

Harmless as it may seem, I can’t justify taking him away from his real duties. The citadel lends itself well to wandering, so I climb the parapets, mingling with locals and few international tourists.

At a large grocery store next to my hotel, I meet Khalid at checkout. He’s a former tour guide and university student turned cashier to make ends meet. In my brief minutes with Khalid, he expresses his disappointment about tourists not returning fast enough. He hopes that more, like me, will start to visit again. 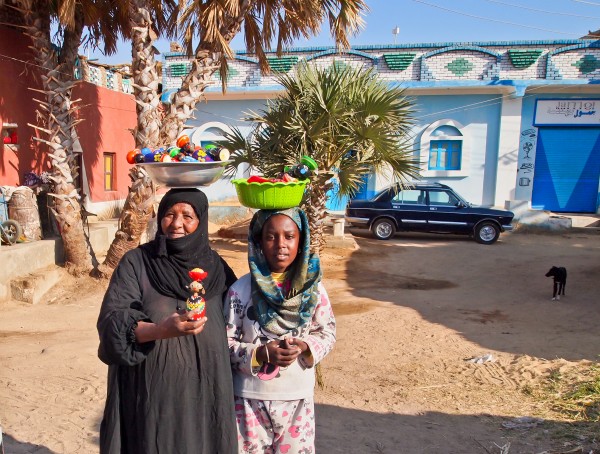 Nubian villagers selling dolls to tourists have been hit hard by the decline in travelers along the Nile.

Plying through the early morning mist to visit a Nubian village, the boat’s engine shatters the silence along the Nile as the hull breaks the water’s mirrored surface.

My small tour group of eight is the only to visit in days, a tenth of what the village used to receive before the revolution. I’m greeted by local girls and women selling wooden dolls at the village pier. One woman pushes her way in so closely she’s touching me from shoulder to hip. I’m astonished by the brazen proximity of a married Muslim woman, fully bundled in her black woolen hijaab.

Dismay shows clearly in their eyes as we begin to leave. One girl implores me to buy some dolls so she can afford school. I take a dozen before moving on.

I return to Giza for a second visit. The site is waking up; local camel drivers are arriving and merchants are putting out their wares. I’m accosted by trinket sellers inside the archeological site. While technically illegal, this small act of lawlessness is usually ignored. This morning, however, a senior officer comes by.

He’s a distinguished gentleman in his forties, and he exudes an authority above that of the other tourist police. Immediately, the hawkers begin to scatter as the officer calmly comes to confront them. Most apologize and then exit. I watch as a dozen or so others drift off, seeming to leave, but returning almost immediately after the officer turns his back.

He turns toward them again, and this time, anger and disgust are clear in his voice. “You are the vermin that is plaguing our country! You have no shame! I am the law, the order of Egypt, and you ignore me, you mock your country and your land! Shame on you! In God’s Name, Go!” His heartfelt commands and pleas still unheeded, he sighs and turns to leave. 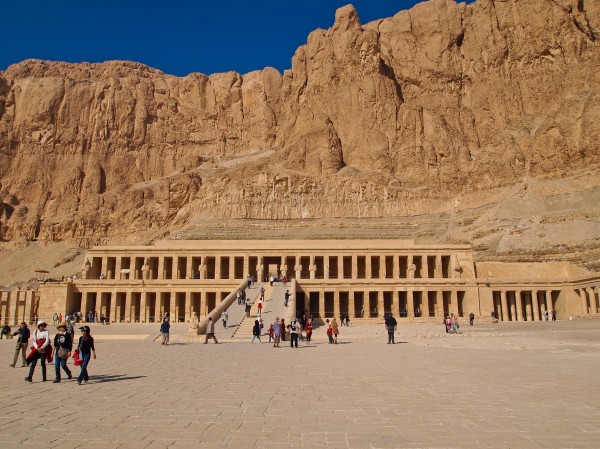 The temple of Hetshepsut, one of Egypt’s most popular tourist destinations and virtually on every itinerary, had the fewest visitors in recent years this past winter.

Searching for lunch the next day, I uncover Sequoia at the tip of Gazira Island. Between the oaky smoke of hookahs, I catch wisps of conversations in mixtures of Arabic, French, and English, mainly about the state of local affairs. The tone of discussion reminds me of growing up during Lebanon’s on-and-off civil war, where life had to go on, regardless of the chaos surrounding us.

Demonstrations in Tahrir Square have flared up again, ignited after a woman was dragged to the ground and beaten, her clothes stripped to her bright blue bra.

But that night, my block of the Zamalek neighborhood is rocked by Western dance and pop music. At first, I think it must be a club, since the area has many discos. Stepping out on my balcony, I see the adjacent apartment building lit up like a beacon, with dazzling lights and dozens of people on its expansive terraces. A festive celebration of life in the otherwise bleak city night. 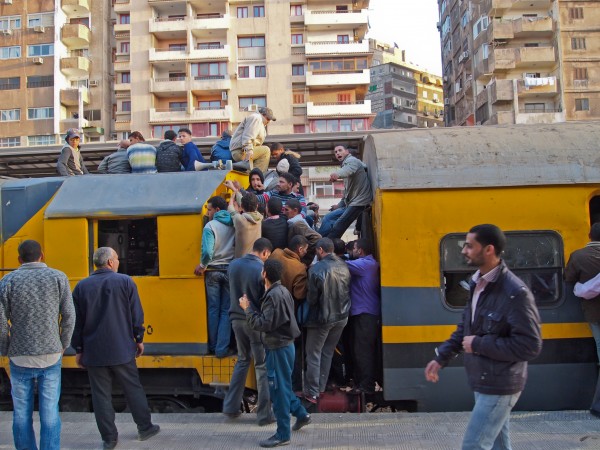 Commuters scramble on to any space they can find during rush hour at the main train station in Alexandria, Egypt.

What did you think of this article?
Meh
Good
Awesome
Bookmark
Posted In
Narrative
Destinations
Cairo, Egypt

The Egyptian uprising from January 25th to February 1st