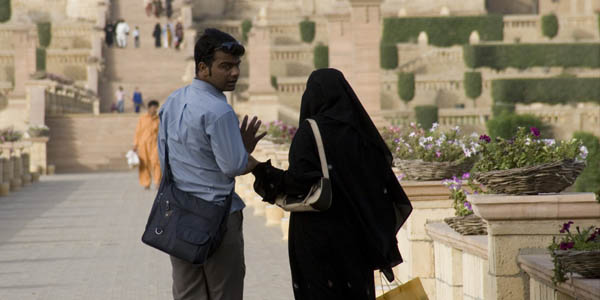 Violence in Pakistan dominates the headlines. But rarely do we hear reports on the perspective of women. Sarah Stuteville finds their voices.

In the gray light of my first morning in Pakistan, the thick salty smell of sulfur introducing me to the seaside city of Karachi, the streets were full of men.

With few exceptions it was men congregating in front of the still dark airport, men piled onto buses carnival decorated with Technicolor and chrome and men weaving through the thickening traffic on motor bikes and rickshaws.

I thought back to my trip to Pakistan in 2006, when one of my greatest regrets was that I hadn’t had the opportunity to meet and hang out with more women.

Sitting at a stop light en route to our hotel (also staffed entirely by men) watching a group of teenage boys crowded on the sidewalk watch me through the taxi window, I promised myself that I would pursue more diversity in my reporting this trip and make a point of finding out what women think about this critical time in their country’s history.

It didn’t take much doing on my part.

By the next evening I found myself at a party with new friends in a wealthy neighborhood, in a suburb of the city. Almost immediately upon arrival in the light strung garden the men declared they would retire to the dining room, leaving us women to enjoy the newly cool evening with windows open and the TV on in the living room.

The Flogging In Swat 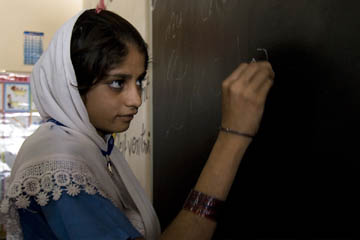 At the first mention of gender segregation my heart lurched with jealousy. I fought back the assumption that the men were sitting down to a round of cigarette smoking and political discussion that excluded me.

I feel anxious enough in female exclusive social situations at home, and through a jet-lagged fog I nervously wondered what these women, some in full burka, might think of me, what they might want to talk about.

My questions were answered soon enough as breaking news of the most recent bombing in Islamabad crowded the T.V. screen. The room came alive with political chatter and I was immediately drawn into the fervent discussion about the rising violence in Pakistan.

“Did you see the video of the flogging in Swat?” one woman asked me anxiously, referring to a grainy cell phone video of a seventeen year old girl being whipped as punishment in the Swat Valley—an area now ruled by Sharia (or Islamic) law and largely controlled by Pakistani Taliban—that has provoked anger throughout much of the country as it’s circulated continuously on national and international news.

Before I could answer, Pakistani President Zardari flashed on the T.V. screen. “Nobody likes Zardari here,” a teenage girl seated next to me on the couch in a brilliant pink shalwaar kameez volunteered. “We think he is weak and corrupt.”

Soon President Obama, addressing the G20 summit, appeared on the screen, his now familiarly handsome and confident image launching a discussion of Pakistani perceptions of the new leader.

A Look In The Mirror

A question from across the room caught me off guard: “What about the violence you have recently been experiencing in your own country?”

“I think we are all wondering why this violence is happening.”

It took me a moment to register that she was talking about the New York shooting of the day before (which incidentally Baitullah Mahsud, the leader of the Taliban in Pakistan had briefly, and by most standards here, comically, attempted to take credit for).

“You also had a shooting at a nursing home recently as well isn’t that right?” the woman, an educational administrator, continued, “Where does this violence come from in the U.S.?”

Struck by the realization that the United States must also come across on the evening news as a violent and inscrutable nation to many here, I stumbled around in a rambling monologue about gun laws and insufficient access to treatment for the mentally ill.

That sad and quiet “why?” passed between women at a dinner party somewhere in the maze of high white stucco walls that house Karachi’s elite became a populist roar the next day. 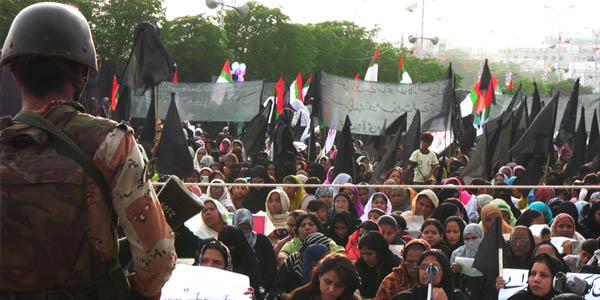 The Women Stand Up

The viral video of the Swat flogging had created a backlash among urban Pakistanis, especially women, and a ladies protest was gathering downtown at the imposing white tomb of Pakistan’s founder Muhammad Ali Jinnah.

10,000 women and children (men were excluded from this protest and forced to mill around in a cordoned off area), were waving sheer black flags of protest in the smoggy evening under a banner declaring:

Pakistani reporters turned their cameras on me as I simply asked, “Why have you come here today?”

“Public flogging of an innocent girl is an act of terrorism; we condemn this barbarism and demand arrest of the perpetrators.”

Through the confusion of protest leaders’ pronouncements and heavily armed military police, women in simple shalwars and burkas jostling babies and urdu placards sat in rows, occasionally bursting out into chants of “Whose Pakistan? Our Pakistan!” making for a strong visual antidote to the angry anti-Western and male dominated protests that usually capture the attention of American news in this part of the world.

I sat briefly among these women on the dusty green mats that had been pulled out for the occasion.

We were the only Western media there and in a weird post-modern moment, Pakistani reporters turned their cameras on me as I simply asked, “Why have you come here today?”

Eyes Of The World 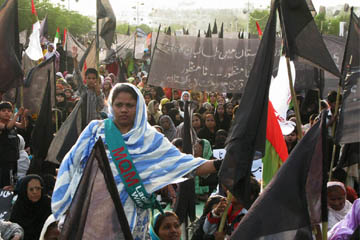 My translator could hardly keep up as they shouted back their responses.

Some said they were here to support the MQM (a popular political party here in Karachi which had organized the protest), others pointed to the tomb of Jinnah, saying that Pakistan was founded as one nation and the current situation in Swat was undermining the unity of the country.

Many were concerned that incidents like the flogging were defining Pakistan and Islam in the eyes of the international community and were there to show that Islamic militancy should not define their country, politics or their religion.

But it was one older woman–cross legged in a worn black shawl–who grabbed my hand and shouted, “We are sisters, you are my daughter and I am your mother. You think these actions are wrong and so do I, if you had been flogged I would be protesting for you as you would do for me.”

As the evening dimmed, and large hawks mingled with black balloons released by protest organizers into the wide city sky, her words embarrassed me.

When Americans think of political instability in Pakistan we don’t think of the Pakistani victims of that instability, we think of our own security.

When videos of angry militants and suicide bombings occasionally make their way onto our computer screens and into our papers, we somehow forget that it is mosques and bus stops full of Pakistanis that die.

And when the blurry cell phone video of a teenage girl being beaten in a distant street shows up on the nightly news, most of us muse at a frightening culture we feel we can’t understand before we consider any sense of solidarity.

Women in this part of the world are often cast as an exotic political side note in the U.S. When I promised myself that I would pursue “more gender diversity in my reporting” I was imagining occasional context to the real war news of this region.

Instead women are in many ways at the forefront of the conflicts here. Their voices aren’t a footnote to the politics of this country – I’m realizing they are the politics of Pakistan.

This article was reported with funding provided by the Pulitzer Center on Crisis Reporting.