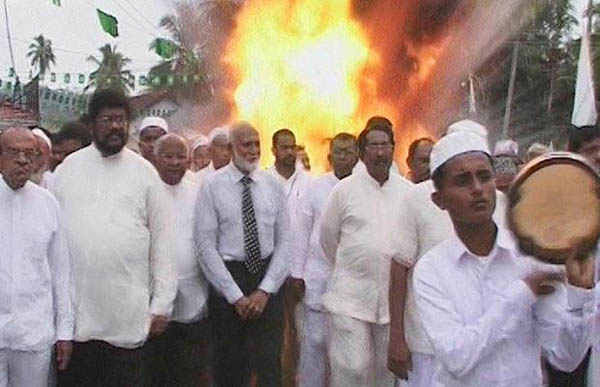 As grotesque as it is mesmerizing, this image shows a Sri Lankan suicide bomber a fraction after the explosive detonates.

From the Telegraph article:

The attack appeared to target six government ministers attending the community event, including the country’s oil and telecommunications ministers. Unconfirmed reports put the toll higher with claims more than 15 had died.

The ministers injured in yesterday’s explosion were part of a large crowd of Muslims celebrating Mawlid, the birthday of the Prophet Mohammed, in Akuressa, a town on the southern tip of Sri Lanka.

Everyday seems to carry with it the news of another attack, another bomb, somewhere in the world. Violence perpetrated to further an agenda, even a score, or simply to cause chaos.

When I hear of these acts, I can’t help but think of Carl Sagan’s words in the short film, Pale Blue Dot. He says:

The Earth is a very small stage in a vast cosmic arena. Think of the rivers of blood spilled by all those generals and emperors, so that, in glory and triumph, they could become the momentary masters of a fraction of a dot.

Think of the endless cruelties visited by the inhabitants of one corner of this pixel on the scarcely distinguishable inhabitants of some other corner, how frequent their misunderstandings, how eager they are to kill one another, how fervent their hatreds.

Our posturings, our imagined self-importance, the delusion that we have some privileged position in the Universe, are challenged by this point of pale light..